"How many people do we need to see cut down before we act?" 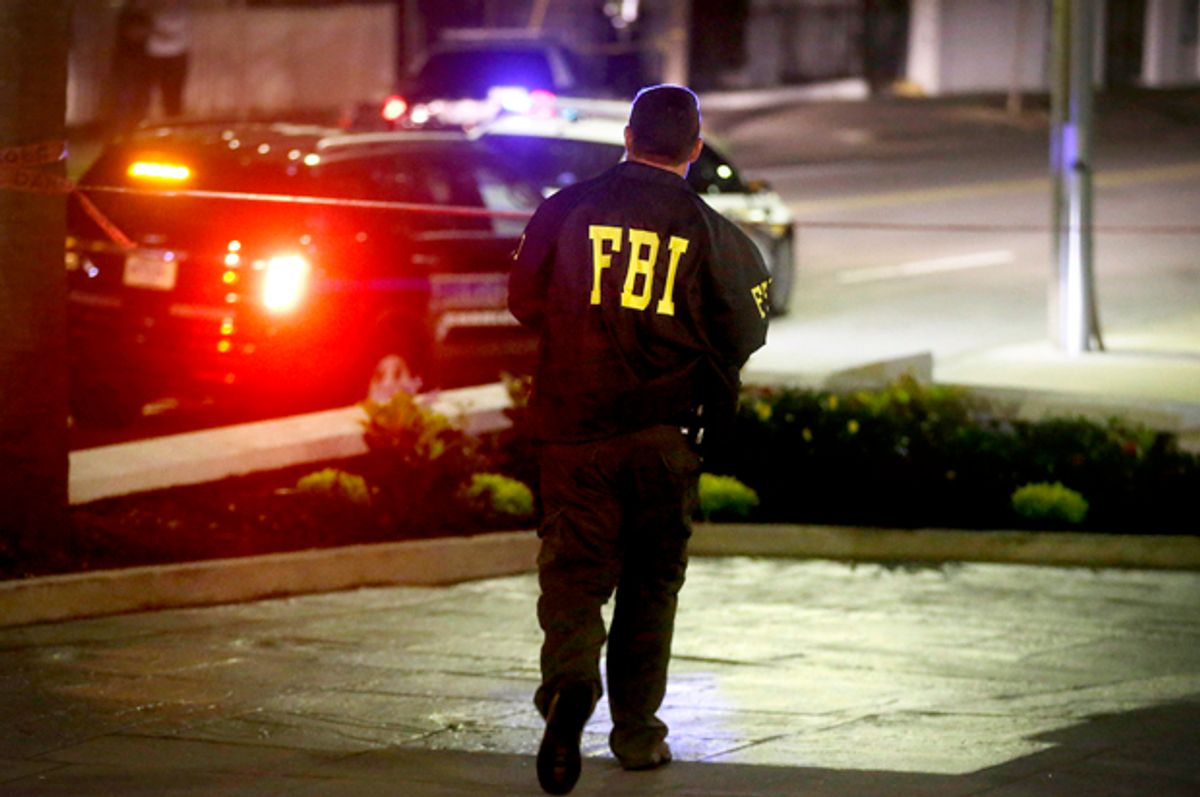 An FBI agent walks across the street from the Emanuel AME Church following the shooting, Wednesday, June 17, 2015, in Charleston, S.C. (AP/David Goldman)
--

In the aftermath of a vicious attack on African-American worshippers by a white gunman in a South Carolina church yesterday, Hillary Clinton said it was time for America to be "honest" and "face hard truths about race, violence, guns and division.”

“How many people do we need to see cut down before we act?” she asked, speaking before the National Association of Latino Elected and Appointed Officials in Las Vegas today, according to the National Journal.

The Democratic presidential candidate prayed for the victims before reminding the gathered elected officials of the role public policy plays in American gun violence.  “In the days ahead, we will again ask what led to this terrible tragedy and where we as a nation need to go. In order to make sense of it, we have to be honest. We have to face hard truths about race, violence, guns and division,” she said.

Clinton told the crowd that she was shocked by what she called the "crime of hate," calling a church "the last place we should ever see violence."

“So as we mourn and as our hearts break a little more, and as we send this message of solidarity that we will not forsake those who have been victimized by gun violence, this time we have to find answers together,” she said.

So far, Clinton is the only 2016 candidate to explicitly call for the reevaluation of guns in America following this mass shooting, although candidates on both sides have explicitly called out the role of racism.

Republican candidate and neurosurgeon, Ben Carson, the only African-American running for president, said in a Facebook post that last night's attack is a reminder that "racial based hate is still very much alive." However Carson, who once called Obamacare “the worst thing that has happened in this nation since slavery,” was quick to lump the violent impact of racism with political disagreements:

In my lifetime I have seen such great progress. Though racial based hate is still very much alive as last night so violently reminded us.

But I worry about a new hate that is growing in our great nation. I fear our intolerance of one another is the new battle ground of evil. Today many feel it is ok to hate someone who thinks differently than you do. The left hates the right. The right hates the left. This attitude is poison. Poison that will sicken all of us.

Just because someone is for Obamacare and another is against doesn't change the fact we are all brothers and sisters. All Americans. As a brain surgeon I can assure you that all of our brains look the same, no matter what our skin color or party affiliation.

Vermont Senator and Democratic candidate, Bernie Sanders ran into a bit of controversy when a pension rally he headlined briefly overlapped with a vigil for the victims in D.C. today, but Sanders also issued a forceful statement on the Charleston attack denouncing racism:

The Charleston church killings are a tragic reminder of the ugly stain of racism that still taints our nation.  This senseless violence fills me with outrage, disgust and a deep, deep sadness.  The hateful killing of nine people praying inside a church is a horrific reminder that, while we have made significant progress in advancing civil rights in this country, we are far from eradicating racism. Our thoughts and prayers are with the families and their congregation.

Democratic candidates Martin O'Malley and Lincoln Chafee both tweeted their condolences to the victims but made not further statements:

While Sen. Marco Rubio (R-FL) failed to acknowledge the attack at all during a speech before a group of so-called Christian conservatives today. Although Rubio did tweet his condolences earlier in the day, he ignored the shooting while promising to protect the 2nd amendment.

For his part, President Barack Obama was one other politician who made an explicit reference to the epidemic of gun violence during his statement on the shooting today, although his resignation at the idea of a legislative fix was sadly apparent. Today's was reportedly the 14th statement he's delivered in the wake of a mass shooting, and Obama said he and First Lady Michelle Obama knew the murdered pastor of the church, Hon. Rev. Clementa Pinckney:

I’ve had to make statements like this too many times. Communities like this have had to endure tragedies like this too many times. We don’t have all the facts, but we do know that once again innocent people were killed because someone who wanted to inflict harm had no trouble getting their hands on a gun. Now’s the time for mourning and for healing, but let’s be clear: At some point, we as a country will have to reckon with the fact that this type of mass violence doesn’t happen in other advanced countries. It doesn’t happen in other places with this kind of frequency. And it is in our power to do something about it. I say that recognizing that the politics in this town foreclose a lot of those avenues right now. But it’d be wrong for me not to acknowledge it. And at some point, it’s going to be important for the American people to come to grips with it, and for us to be able to shift how we think about the issue of gun violence collectively.