The USDA insists it's a key component of a healthy diet. A wealth of research would suggest otherwise 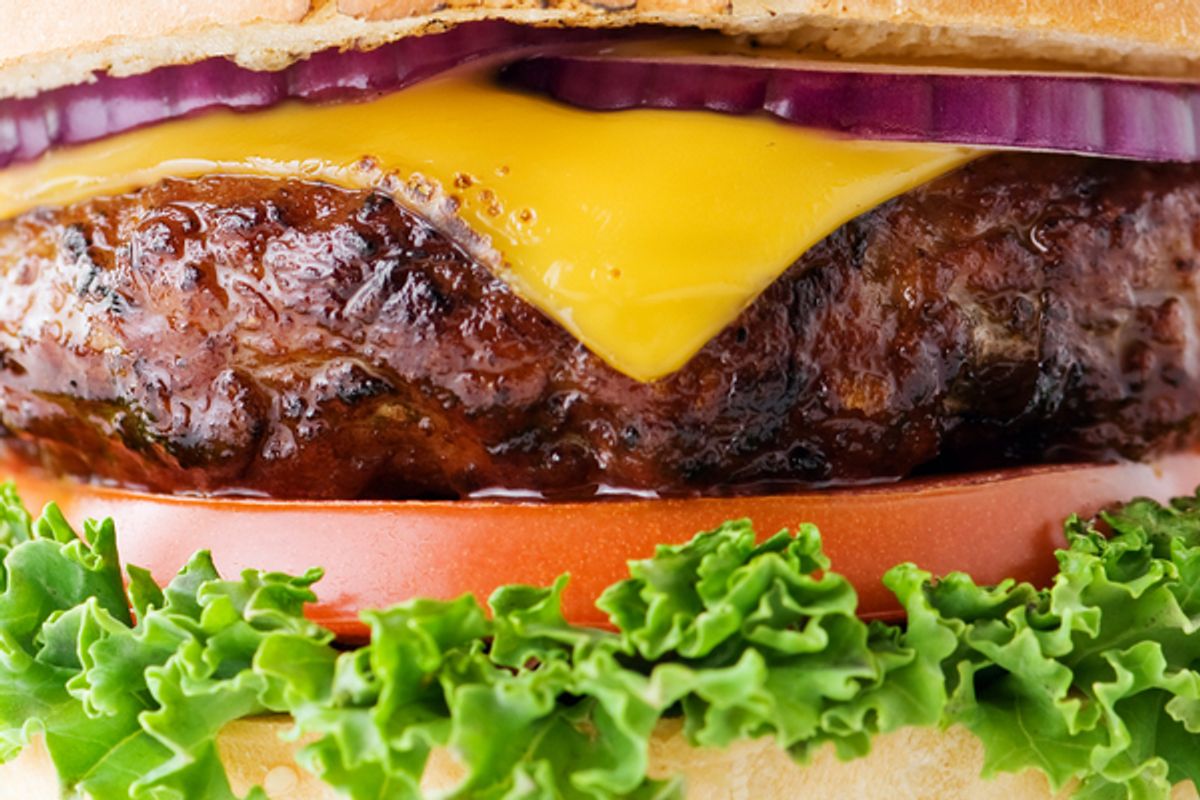 In 2005, the USDA rolled out a new food pyramid reducing red meat’s place in a healthy diet. Recently, an advisory committee developing the 2015 Dietary Guidelines for Americans, which are revamped every five years, said Americans should eat less red meat and processed meat in favor of a "diet higher in plant-based foods." Committee members wrote that a red meat-based diet "has a larger environmental impact in terms of increased greenhouse gas emissions, land use, water use, and energy use," compared to plant-based and Mediterranean-style diets.

This further inflamed the meat industry, yet the industry is not giving up. Here are the liest Big Meat spreads to try to subvert healthy diet advice and retain its profits.

Lie #1: There is no science linking red meat to cancer, stroke and heart attacks.

This is the meat industry's story and it is sticking to it, like Big Tobacco maintaining cigarette safety until the bitter end. The North American Meat Institute (NAMI) calls the new guidelines "flawed" and "nonsensical," and cites “inconsistencies” in the links between red meat and health problems in a 44-page rebuttal to the new guideline proposals.

Yet a quick glance at the medical literature shows nothing nonsensical. The first search term under "red meat" on the U.S. National Library of Medicine website is "cancer" where 1,065 research entries are found. The third search term is for “colorectal” cancer where there are 452 research entries. Other top search choices include "cardiovascular disease," "heart," "breast cancer," "diabetes" and "red meat consumption and mortality.”

Lie #2: Meat today is "leaner" than it used to be, and better for you.

The new guidelines absolve cholesterol from contributing to heart disease but blame saturated fat. So meat producers are trying to downplay how much saturated fat is in red meat. "Today’s beef supply is leaner than ever before with more than 30 cuts of beef recognized as lean by the government’s own standards," boasts the Iowa Cattlemen’s Association. "The fat content of lean red meat has reduced substantially over the past few decades. A change in farming methods and butchery techniques now means that lean beef contains as little as 5% fat, lean pork 4% fat and lean lamb 8% fat," agrees another pro-red meat website. The North American Meat Institute even goes so far as to say that ham and processed meat can be “lean."

There is another risk from meat fat which is especially prevalent during barbecue season: dripping fat creates carcinogens called "heterocyclic amines" and "polycyclic aromatic hydrocarbons," health experts warn. And even when red meat is lean, it may still be a heart risk. Increasingly two components found in meat—Trimethylamine N-Oxide and Neu5GC—are viewed as a key mechanism that drives the heart risks through causing inflammation in the artery wall.

Lie #3: Meat is an ideal protein because it is "nutrient dense."

Meat's biggest virtue, boasts the meat industry, is that it is "nutrient dense," meaning rich in protein, vitamins, minerals and amino acids. Meat promoters say meat is superior to other protein because it provides "satiety" that other foods lack. Not only do you feel fuller for longer, the satiety factor can even make you lose weight—in the same way Snickers bars are a diet food.

"For long-term weight loss, improvements in satiety levels—a measure of the state of fullness between meals—have been demonstrated in people who opt for protein-rich foods like lean red meat as part of a reduced calorie, moderate fat diet," says a red meat website.

And even if you don’t actually lose weight eating red meat, you won't gain it, says NAMI. "Processed meats, even consumed twice daily for a week, allow Americans to stay within daily calorie goals.”

Of course, other protein foods like nuts and legumes are also dense and provide satiety and calories and are proven to have benefits beyond those of red meat. Recent research in the American Journal of Clinical Nutrition found an "inverse association between nut consumption and the risk of all-cause and cardiovascular disease mortality in US male physicians."

The North American Meat Institute admits that salt "plays a critical role in the production of meat products” especially processed meat. But rather than acknowledge the role of excessive salt in high blood pressure, heart attack and failure, stroke and damage to the kidneys and blood vessels, NAMI thinks salt is a good thing. Salt "is essential for human health and development, particularly in regulating the body’s electrolyte balance, preventing dehydration, and maintaining many of the body’s cellular functions," says NAMI. It "improves the flavor, texture, and safety of meat, especially processed," and hydrates "muscle proteins" while it "allows a gel structure to form during cooking." Pass the Slim Jims.

Preservatives like salt also keep meat safe by retarding the growth of germs like listeria, salmonella and E. coli, says NAMI, though it does not address why so many pathogens are in the meat to begin with. Nor does NAMI address other common preservatives in meat that AlterNet has reported onlike nitrites, ammonia gas and carbon monoxide.

Defending a food simply because it has "palatability" and people like it certainly puts the cart before the horse. You could say the same thing about cigarettes. Toddlers, after all, like cough syrup and dogs like chocolate. Still, NAMI charges that instead of "demonizing" red meat, the new guidelines shouldemphasize "proper portion size and smart choices, which still allows consumers to continue enjoying the foods they love as they build an overall healthy dietary pattern that includes fruits, vegetables, whole grains, and lean protein”—a philosophy also known as Cutting Down Slowly.

NAMI charges that the new guidelines are insensitive to minorities whose diets include more salty, processed and cured meats because they ignore importantcultural differences. Big Meat even plays the elitist card, pretending that healthy diets without saturated fat are some kind of rich prerogative. In truth, the poor suffer the most from obesity, diabetes and cardiovascular disease from cheap fast food diets which include cheap and processed meat.

It never fails. When producers of controversial products are up against the wall, they scream "consumer rights." That is how California's GMO labeling Proposition 37 was defeated. Groups like the Center for Consumer Freedom (formed by Philip Morris in 1995) pretend that harmful lifestyles and preventable cases of lung cancer or diabetes are an individual’s right and don't raise everyone's healthcare costs and squander health resources. Right.

Sen. John Thune (R-S.D.) and 29 other legislators from meat-producing states strike such a tone in a recent letter to USDA Secretary Tom Vilsack and HHS Secretary Sylvia Burwell about the guidelines which moved the North American Meat Institute (NAMI) to create a change.org petition called Hands Off My Hot Dog.

“We stand together as people who value personal choice and reject taxes on foods that elite academics deem unhealthy. We assert ourselves as intelligent, free thinking people capable of making decisions that are best for our families’ nutrition needs, traditions and personal budgets,” says the Hands Off My Hot Dog petition. “Our great Declaration’s preamble declares that the pursuit of happiness is an inalienable right and for the 95 percent of Americans who enjoy meat and poultry, their food traditions are integral parts of their lives and their happiness and should not be impinged upon by nutrition despots who seek to impose their personal choices on others.” Take that!

So far, the petition has 2,500 signers compared with a pro-guideline petition that got 150,000 signers.

Lie #7: The government doesn't have any business telling us how to eat!

“It is hard to believe that the very agency tasked with promoting agriculture would encourage people not to eat meat,” Sen. Thune wrote in his letter to officials. “From the short-lived Meatless Mondays, to misguided dietary guidelines, farmers and ranchers deserve more of an ally in the USDA, rather than an adversary. Misleading dietary guidelines would not only confuse consumers, but would also harm South Dakota’s livestock industry.”

While it is true that part of the USDA’s charter is to “provide leadership on food, agriculture, natural resources [and] rural development,” that leadership includes “nutrition, and related issues based on sound public policy [and] the best available science.”