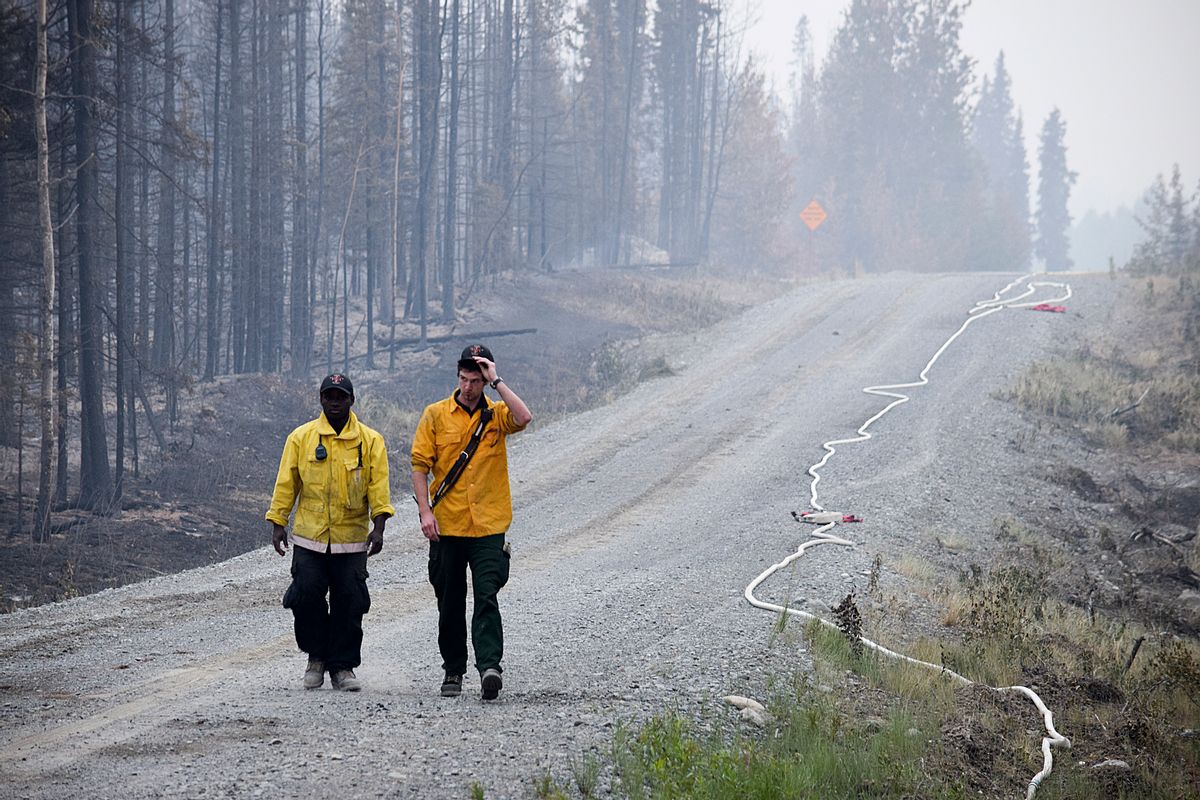 In this June 16, 2015 photo, two Nikiski Fire Department firefighters walk on a road near a fire-ravaged forest left behind by the Card Street fire in Sterling, Alaska. The wildfire moved rapidly northeast toward the Kenai National Wildlife Refuge and authorities have evacuated the Upper and Lower Skilak Lake campground. (Rashah McChesney/Peninsula Clarion via AP) (AP)
--

Here's the immediate problem: Alaska is on fire. Wildfires have been raging all week in the northernmost state: two major ones are currently being fought near the communities of Sterling (#CardStreetFire) and Willow (#Sockeyefire), while more than fifty smaller blazes are demanding firefighting crews' attention across the state. The Card Street fire exploded in size Thursday evening: at 12,000 acres, it's officially the nation's top wildfire priority.

The sheer number of fires, said Pete Buist, a spokesman for the state Division of Forestry, "in Alaska terms is not the end of the world" -- 2004, which saw a record 6.7 million acres burn, demonstrated just how catastrophe the state's wildfire season has the potential to get.

But crews have been preparing for a season marked by unusually hot, dry weather -- and following a winter marked by below-average snowfall -- that can exacerbate the blazes. Any associations you might have with Alaska being a generally chilly place, actually, were belied by last month's heat wave: with average temperatures 7.1 degrees above normal, the state had its hottest May in 91 years of record-keeping. Here, via NASA's Earth Observatory, is what that deviation looked like: North American land surface temperatures from May 17–24, 2015, compared to the 2001–2010 average for the same eight-day period. Shades of red depict areas that were hotter than the long-term average; areas in blue were below average for the week. White pixels were normal, and gray pixels did not have enough data, most likely due to excessive cloud cover.

Meteorologists attributed the unusual heat to a "kinked jet stream that is sending air masses in a more north-south flow than the more typical east-west direction" -- a pattern that may be connected to two typhoons in the Pacific.

In the long-term, the problem gets much scarier. Thanks to climate change, the state, with the rest of the Arctic, is currently heating up at twice the rate of lower latitudes, and its weather, as one state meteorologist, who was only sort of joking, put it, is "broken." Earlier this year, Slate's Eric Holthaus did a deep-dive on why that's happening:

Alaska’s recent surge of back-to-back warm winters comes after a record-snowy 2012, in which the National Guard was employed to help dig out buried towns. Then, about two years ago, something in the climate system switched. The state’s recent brush with extreme weather is more than just year-to-year weather variability. Alaska is at the point where the long-term trend of warming has begun to trump seasonal weather fluctuations. A recent shift toward warmer offshore ocean temperatures is essentially adding more fuel to the fire, moving the state toward more profound tipping points like the irreversible loss of permafrost and increasingly violent weather. If the current warm ocean phase (which began in 2014) holds for a decade or so, as is typical, Alaska will quickly become a different place.

Pull back a little further, and we all have reason to be concerned, not least because Alaska is, as Holthaus puts it, "a canary in our climate coal mine." In a study out just this week, scientists with the University of Alaska at Fairbanks reported that the state's glaciers lost 75 gigatons of ice per year between 1994 and 2013, meaning the region alone has likely contributed to several millimeters of sea level rise over the past two decades. They concluded that “Alaska will continue to be a primary contributor to global [sea level rise] through the end of this century."

The record heat and low snowfall experienced this winter, again, is making a bad situation worse. “The lack of snow means that the glaciers can initiate melt more rapidly,” study co-author Anthony Arendt, a research scientist at the University of Washington in Seattle, told the Washington Post. “So if it’s a warm summer this will be a pretty bad year for the glaciers in Alaska."

About those wildfires, by the way: Alaska's been seeing more and more of them lately. According to a recent study, total acreage burned in the state has increased fivefold since 1943, an increase attributed to human activity like logging and development, but also to the broader shift in climate. And there's reason to believe that those fires, by speeding up the thawing of the permafrost and thus releasing trapped greenhouse gases into the atmosphere, will end up contributing to more climate change. Experts call that a "positive feedback loop." It's best understood, though, as a disaster in the making.