"Blacks in America have lived with terrorism for centuries": Monstrous history at the heart of the Charleston massacre 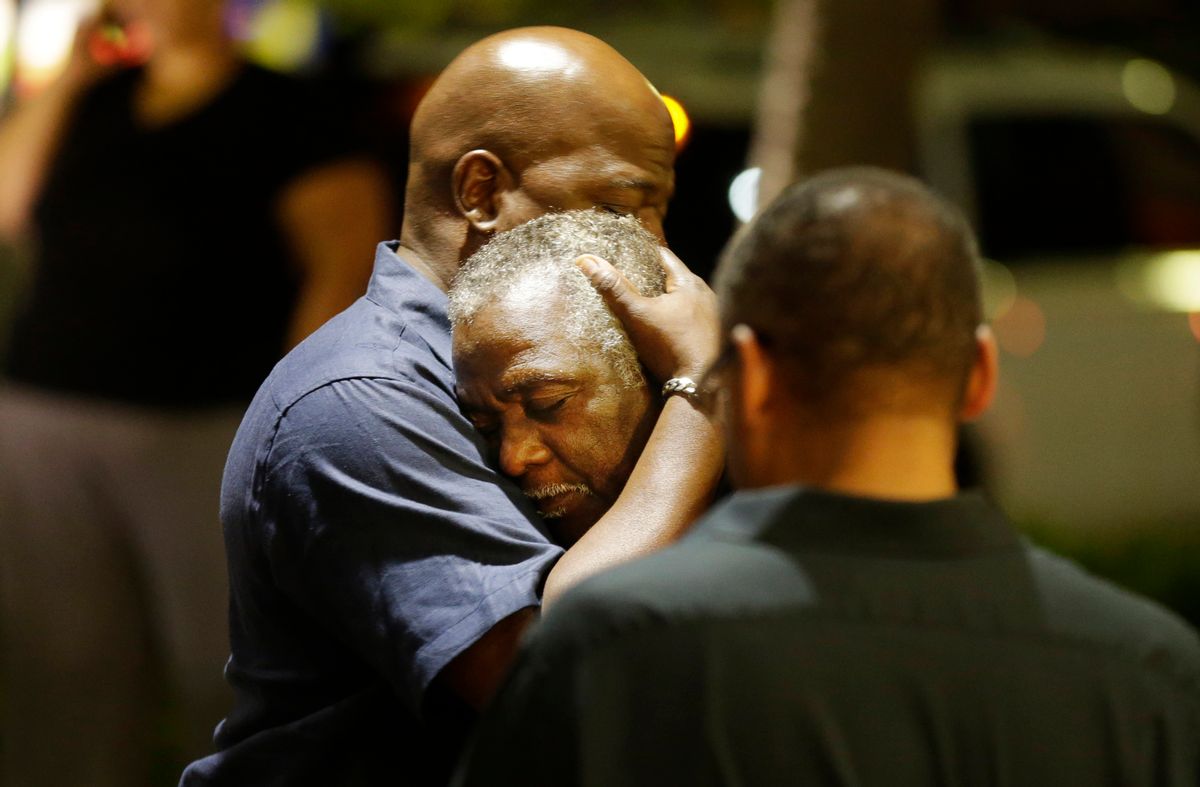 Worshippers embrace following a group prayer across the street from the scene of a shooting Wednesday, June 17, 2015, in Charleston, S.C. (AP Photo/David Goldman) (AP)
--

It hasn’t been lost on those commenting on the Charleston shooting that Denmark Vesey helped establish Emmanuel A.M.E. Church.

In June of 1822 white Charlestonians apparently uncovered a slave rebellion plot organized by the former slave. Slaves and free blacks would take over the city arsenals, gather slaves from nearby plantations, and slay the white people—taking control of Charleston. Vesey planned to eventually lead slaves to Haiti where they could be free.

What hasn’t been brought up much yet is just how controversial Denmark Vesey’s legacy still is in Charleston and in South Carolina. In 2010 when a ceremony was held to break ground on the construction of a statue in Denmark Vesey’s honor, a local newspaper columnist responded, “Erecting a statue to honor Vesey is admitting that terrorism is sometimes justified, depending on the cause. But for civilized people, terrorism should never be justified—and neither should Denmark Vesey.”

But the Vesey plot never happened. Some historians have even questioned whether or not there was a plot at all. What we do know is that in its wake, white Charlestonians burned Emanuel A.M.E. to the ground and city officials arrested over 131 slaves and free blacks, releasing 30, transporting 37 outside the United States, and acquitting 23. Vesey and five other conspirators were hanged on July 2 at a site at Blake’s Lands, just beyond the city limits, an open space alongside the Cooper River. After they were hanged, their bodies were given over to the surgeons.

On July 12, two more conspirators were hanged, and then on July 26, the city prepared to hang 22 more. A crowd gathered to watch this terrifying pageant meant to strike fear in the hearts of anyone considering the overthrow of slavery. And it was a terrifying sight, but not in the ways city officials had imagined it would be. The condemned men were to stand on one of three long benches placed against the walls of The Lines where nooses had been thrown over from the other side; it was a most basic gallows. But the drops were too short and the men gasped for air and kicked their feet. A police captain walked along shooting each man. Over the next few weeks, five more people were hanged. More blacks were executed in Charleston that summer than in any other Southern slave conspiracy.

Everyone remembers Vesey’s plot but few remember the violent and misguided response. White Charlestonians panicked and sought retribution but not a solution. The city remained under military watch for most of the summer and officials reinforced laws that shaped the lives of slaves and free blacks. The city also established a city guard and built an arsenal and barrack that would later become The Citadel, South Carolina’s military college, about a block from where Emmanuel A.M.E. stands today.

In the wake of the post-slave plot executions, some Charleston officials patted themselves on the back for a job well done. One claimed, “It is consoling to every individual…to be able to say that, within the limits of the city of Charleston, in a period of great and unprecedented excitement, the laws, without even one violation, have ruled with uninterrupted sway; that no cruel, vindictive, or barbarous modes of punishment have been resorted to; that justice has blended with an enlightened humanity.”

But not every white citizen of Charleston concurred. In a letter to her sister in Philadelphia, Mary Lamboll Beach lamented, “Ah! Slavery is a hard business,” she wrote, “and I am afraid we shall in this country have it to our bitter cost some day or other.”

I think we know what that bitter cost is—the racist violence that has been and continues to be perpetuated against black people in this country.

This time it is a young white man who has committed mass murder in Vesey’s church. They will call him a monster. They will say that he was mentally ill. They will say he shouldn’t have had access to a gun. And maybe all of that is true in a way, but the reality is that he is a product of a racist country that gave him the green light to shoot.

In the 19th century people were shocked that their slave would revolt. In the 21st century, people are shocked that a white man would sit patiently through a Bible study and then kill nine human beings. But massacre is nothing new to my home state.

In 1968, in my hometown of Orangeburg, SC, just down the road from Charleston, 3 black men were killed and at least 28 injured when state troopers gunned them down at a protest. A local leader I quoted in a book I wrote about the Orangeburg Massacre noted, “blacks in America have lived with terrorism…for centuries.”

Here we are again. Another massacre. If the repeated shootings of unarmed black men by white police officers doesn’t do it, will this mass murder open people’s eyes to the very real terror that black people in America face?