Fox News is wrong about Charleston: Religion isn't a victim of the massacre, it's a weapon 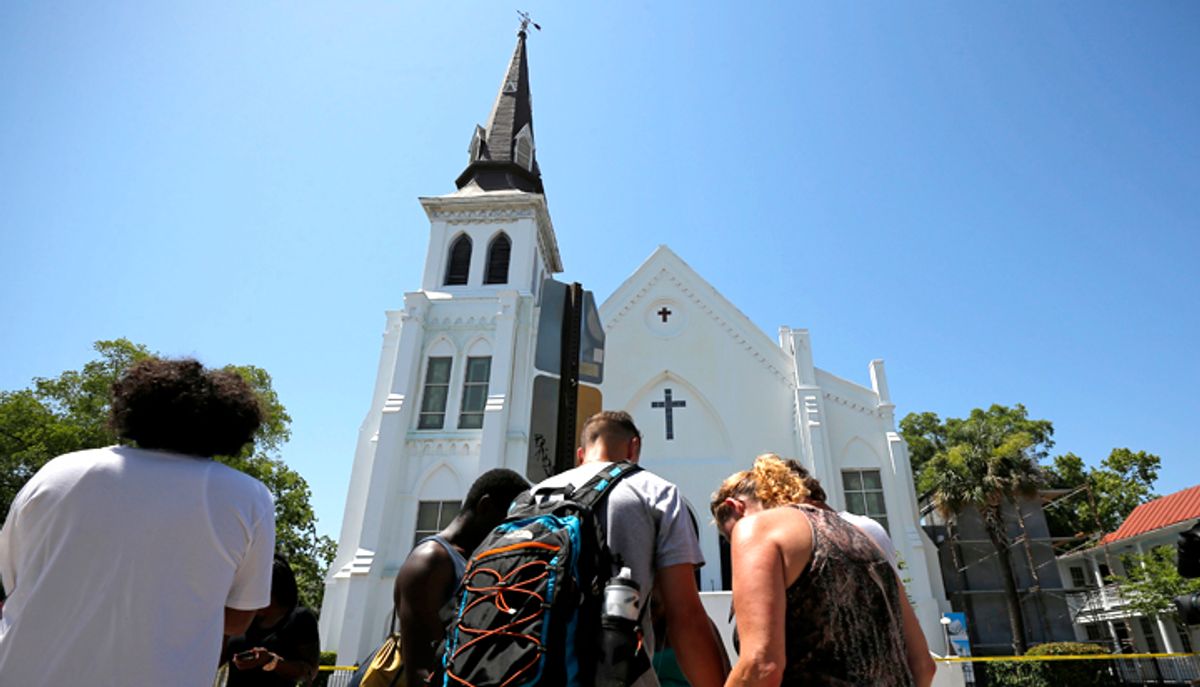 Last night, a young man in Charleston, South Carolina, walked into a church, sought out the weekly prayer group, sat with them for an hour, and then got up and shot them. When he walked out, nine people were dead.

It strains credulity to cast this mass murder as anything but a hate crime. The South Carolina police immediately identified it as a hate crime. So did the FBI. News outlets are calling it an act of domestic terrorism. Yet some insist on denying that race was a factor, even though the lone adult survivor told authorities that Dylann Storm Roof said to the group of black worshipers: “You rape our women and you’re taking over our country — and you have to go.”  Then he reloaded.

But Fox & Friends has long been insisting there’s a War on Christianity. In some minds, this shooting just proved those fears were justified. These narratives have primed Roof to become the Bizarro twin of Rachel Dolezal, whose self-identification as a woman of color could be trotted out as evidence that “Anti-Whiteness” is real and so is #BlackPrivilege. (Why else would a white woman choose to present herself as black unless she wanted the perks -- like, say, being arbitrarily spared by a man who just killed your entire prayer group, because he wants you to tell his story to the world?) As for Roof, whose supporters have already started a group on Facebook, accusing fingers are now pointing at this massacre as confirmation that white Christianity is under siege.

For example, this nugget popped up in my Facebook feed:

“I doubt this is a racially motivated crime. It's a crime against Christians, we all need to be mindful because we are being labeled as the root of Americas problems. We'll see more and more humanist terrorists [sic]. Prayers for the survivors, and that the shooter is quickly apprehended.” #CharlestonShooting.

In the minds of the paranoid faithful, it’s not about race, you see, even though the shooter is a white man who targeted a black church, and let’s never mind that Dylann Storm Roof proudly sports the flags of apartheid-era South Africa on his jacket, and a Confederate license plate on his car. It’s entirely possible, though as yet unconfirmed, that Roof is a Christian, making this massacre the religious equivalent of an uncivil war. Not to mention a deadly sin. Not to mention a violation beyond the pale of what a just and free society should tolerate.

Yet by walking into a black church that welcomed him, the shooter trampled on taboos so profound that scales are finally beginning to drop from shocked eyes. Neither the “Batman” shootings in a Colorado movie theater nor the elementary school horror at Sandy Hook were sufficiently grotesque to pierce the usual veils of denial, because these “gun-free zones” were also outposts of liberal values. But a historic Protestant church in the South? The shooter is practically begging America to confront its toxic legacy of slavery, to examine the distortions of politics and religion in the service of crass venality.

He’d targeted a branch of the Methodist Episcopal Church. What is that, exactly? To New England ears, the combination rings oddly, as the denominations are like oil and water. It is the first form of Methodism in the United States. In 1844, a schism emerged: One side supported slavery, the other was profoundly against it.

Pro-slavery and anti-slavery factions ultimately forced the Methodist Episcopal Church to split into Northern and Southern branches, with the political schism intensifying when Abraham Lincoln became president, and the Civil War erupted in 1860.

The history of race and racism inside the Methodist church is a window into the workings of religion and race in the U.S. in general, providing the necessary framework for the Emanuel A.M.E. congregation in Charleston, whose members sought solace in prayer  and sanctuary in the arms of the church. Their spiritual needs were being guided by Clementa Pinckney, a black pastor and former state senator, who now figures among the dead. This shooting cannot be separated from the long history of violence against black churches in the South, including the KKK bombing of the Baptist church in Alabama that killed four little girls in 1963. The attack galvanized the Civil Rights Act, which passed the following year.

None of these  men, women and children were targeted because of a war on Christianity. They died because religion is being used as a weapon.

Even the most prosaic murder rips through the social contracts governing a functioning society. But when the blood of innocents is shed in the house of the Lord, the act of killing surpasses those laws wrought by men to instead become an ontological rupture. It is why we describe ourselves “shaken to our core” by this latest mass killing spree, as if something greater than murder has occurred. It is an affirmation that the devil is dancing and God is dead. A full-throated obscenity in our midst.

To many, church remains a sacred space, a place of grace and peace and refuge, the last bastion of a nostalgic ideal where the church was the center of a white-picket-fence community. Not the mall, the gym or the bar. The church welcomed all, and bless you for joining us to worship in His name. The shooter ripped away that sense of security, cruelly showing that nothing, now, is sacred, not even the sacred cow of a mythic past where everyone was socially climbing ladders inside the American Dream. Those ladders have been yanked away. And so we are left, staring helplessly into the abyss of American Dread, unwilling to look away, unable to call it by name.

This kind of incommensurable violence threatens the conceptual order that makes it possible for us to claim ourselves human beings, distinct from all other animals that walk and fly and crawl because we alone are made in God’s image. But history has weight. History carries. And history will keep on repeating itself, until we collectively choose to change it. Until then, church is no longer a place of grace, but a graveyard for mourners silently weeping for justice.