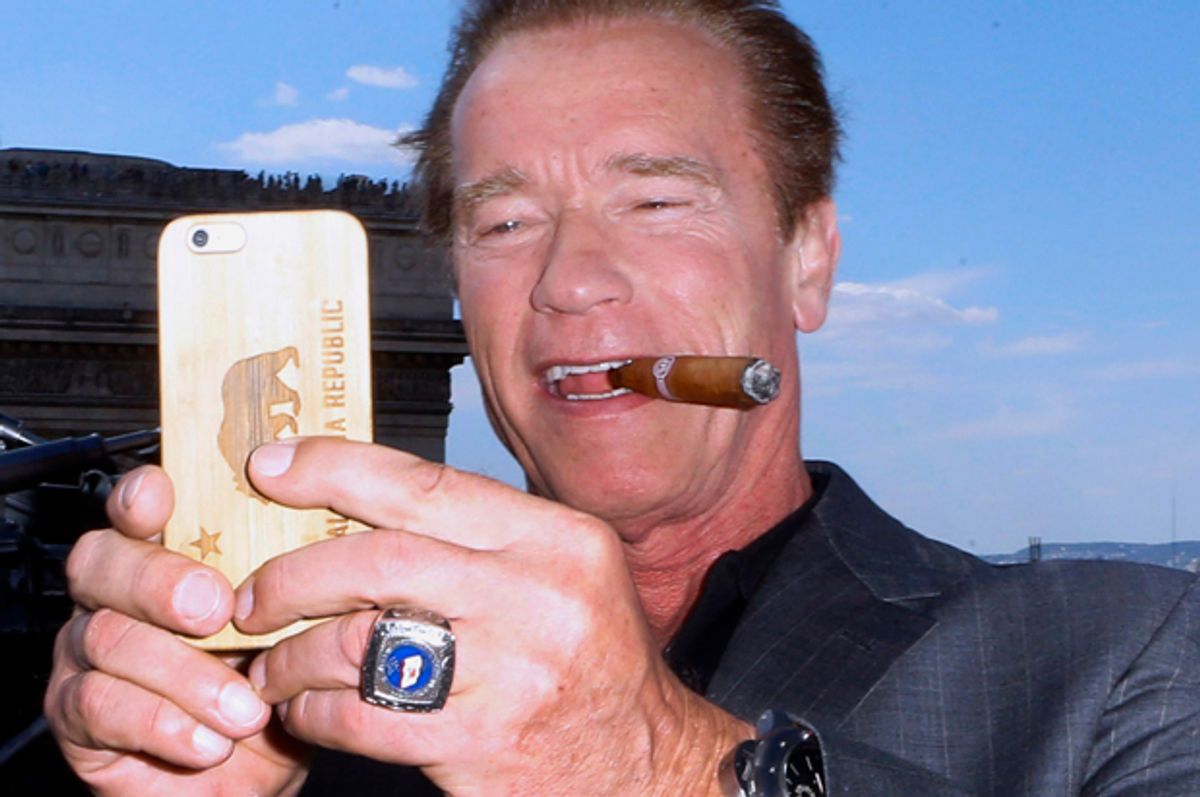 Summer is the time for reboots and sequels – and there’s no shortage of them now or over the year that follows. “Ted 2,” a new “Gremlins,” a new “Point Break,” more “Vacation” sequels, a revived “Alvin and the Chipmunks.” The flood of these movies is supposed to distract us from how brain-dead and out of ideas mainstream Hollywood has become.

Most of these will be forgettable, a few will be awful, and, by accident, one or two might be pretty good. But one I will not buy is Arnold Schwarzenegger’s reboot. I don’t just mean the new Terminator movie – which is hard to have much confidence in to begin with -- but the video that has lit up online of Arnold goofing at Madame Tussauds and hamming it up around the streets of Hollywood. “Arnold Pranks Fans as the Terminator...for Charity,” as it’s called on YouTube, tries to distract us from how bad a governor and what a mendacious human being Arnold is.

The video shows Arnold dressed in black leather, posting as a wax dummy and shocking people when he comes to life. (This actually does shock us a little bit – his acting is so wooden it's hard to say if people would be able to tell the difference.) Arnold’s signature tone-deaf sense of humor (“don’t bump my selfie stick”) is in full display. He grimly orders a guy, who doesn’t seem to recognize him, out of his own truck, and then tells him he’s just kidding. Funny!

Of course, Arnold’s not just doing this as a shameless movie plug, but as a charity thing for afterschool programs. I like afterschool programs, too. But when a politician – and just a few years back, this native of Austria was exploring the idea of running for U.S. president – starts advertising the good they are doing with their charitable work, it’s usually a sign that they’ve got something up their sleeve. And given that as governor, he tried to cut billions from public schools and went after nurses and teachers, I'm not sure about his commitment to the lives of the little people.

Arnold has been casting around for something to do with himself after leaving office after eight unimpressive years as California’s governor, and his acting career post-Governator hasn’t quite caught despite occasional billboards of him around L.A. holding various firearms.

Back in 2003, he ran largely on the deficit accumulated by his predecessor, and then, after eight years, left the state with the same kind of deficit. His promises were emptier than even the typical politician: "We have to make sure everyone in California has a great job. A fantastic job!" That one worked out great.

His friendship with Nazi war criminal Kurt Waldheim was also a bit creepy, and not just because Schwarzenegger Sr. was a National Socialist and because Arnold himself once said "I admired Hitler, for instance, because he came from being a little man with almost no formal education, up to power. I admire him for being such a good public speaker.” And calling lawmakers who disagreed with him “girlie men” is the kind of macho BS he'd get called on if he tried it now.

His race for governor, though, may’ve been his low point. When evidence began to come out about his many years of sexually harassing women on movie sets, and the Los Angeles Times devoted substantial resources to tracking them down, he both attacked the paper for “trash politics” and sort of admitted they were right. It was a moment of truly Nixonian sleaziness. "I always say that wherever there is smoke, there is fire," he said in San Diego. "So I want to say to you, yes, I have behaved badly sometimes. Yes, it is true that I was on rowdy movie sets, and I have done things that were not right, which I thought then was playful. But I now recognize that I have offended people. And to those people that I have offended, I want to say to them, I am deeply sorry about that, and I apologize."

He put his hands under a woman’s skirt and grabbed the breasts of women he’d just met and now he realizes he offended people?

Arnold also gave another of the most strained apologies ever in San Bernardino:

Oh, and there’s that love child had had with the maid, and the years of lying to his wife about it. (No one should be surprised after this trip to Rio.)

To be fair, Arnold did some good things during his years as governor, including environmental legislation. However unimpressive he was most of the time – his real gift seemed to be charming starstruck pols over cigars or doing photo ops on the backs of motorcycles – he mostly governed as a moderate Republican. Journalists who know him tell me he is much smarter than he seems.

But between the Hummer driving, the macho narcissism of his body building, the endless number of joyously violent movies, the affairs and lying, the only thing scarier than a wax Terminator suddenly saying, “I’ll be back” is the thought of Arnold’s return to public life. That’s a sequel we really don't want to see.