The President wants Democrats to trust congressional Republicans on this. If only it were so easy... 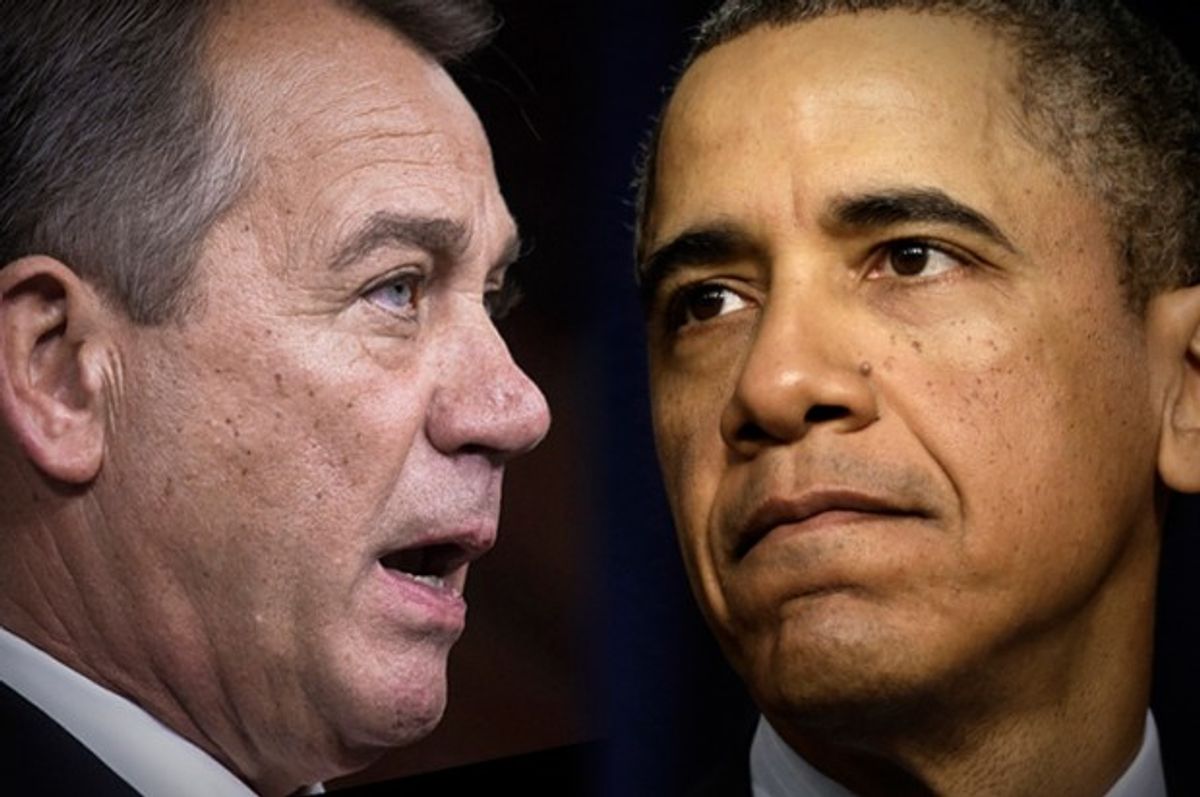 Trade promotion authority for the president to negotiate trade deals is far from dead, despite a humiliating defeat for the Obama administration on the floor of the House last week. Multinational corporations spanning the globe desperately want this, because without TPA, also known as fast-track, there's not likely to be any Trans-Pacific Partnership (or the other big deal in the pipeline, the Transatlantic Trade and Investment Partnership.) The Obama administration and Republican congressional leaders have flexed every neuron in their collective brains to work out a complex legislative strategy to move TPA, and an extension of the Trade Adjustment Assistance program, to the president's desk.

The strategy to pair TAA with TPA did not work: House Democrats weren't willing to play along with the vote-splitting game, so they killed TAA -- something they like -- in order to take down TPA. The new strategy involves decoupling the legislation. The first step in the new gambit was successful yesterday afternoon: the House passed TPA with a bare majority.

Let's say that Senate Democrats pass TPA and and TAA. TPA goes to the president's desk, TAA goes back to the House. At that point, as we explained yesterday, the next move is President Obama's. He has vowed over and over again that he wants both TPA and TAA on his desk. If anti-TPA Democrats take him at his word, then, they have leverage: they can simply reject TAA to ensure that TPA doesn't get signed. But if President Obama changes his mind and signs TPA into law before TAA gets to his desk, then House Democrats will have lost and might as well go ahead and vote for TAA.

The White House's public posture has been that he won't sign anything until TPA and TAA both come to his desk. But, as Vox's Jonathan Allen reports today, that may not be what he's saying privately to lawmakers (emphasis ours):

What Schultz stopped just short of saying — and this is important — is that the president would veto TPA if he doesn't get TAA, which Democrats support when they're not trying to undermine other legislation. Rep. Jim Himes, a Connecticut Democrat who backs the trade bills, said Thursday that he's been assured by the White House that the president would sign TPA "in anticipation of" Congress sending him TAA. That is, he would sign TPA into law before TAA makes it through Congress.

This would be a major gamble from the White House. It would take away Democrats' reasons to block TAA, sure. But Obama also run the risk that congressional Republicans would stab him in the back. Something they're very much capable of doing!

Republicans do not like TAA. They see it as welfare. If people lose their jobs as a result of trade agreements, they should just pull themselves up by their bootstraps and get new jobs, doing... whatever people skilled in one trade do after that trade has been eliminated! Grr!

The White House claims that it has John Boehner's word that TAA will come to the floor. But let's entertain a couple of possibilities:

• Boehner brings TAA to the floor in good faith with the expectation that it will pass, but rank-and-file House Republicans have other plans. They all vote against it, because they do not like the program and see a good opportunity to drive a stake through it.

As Vox's Allen writes, the White House's pitch to pro-trade Democrats is to "trust Republicans." Just get TPA to his desk, and then those friendly neighborhood Republicans will move TAA toot-sweet. Good luck with that.