Rand Paul's demented promise: I'll do to America what Sam Brownback did to Kansas 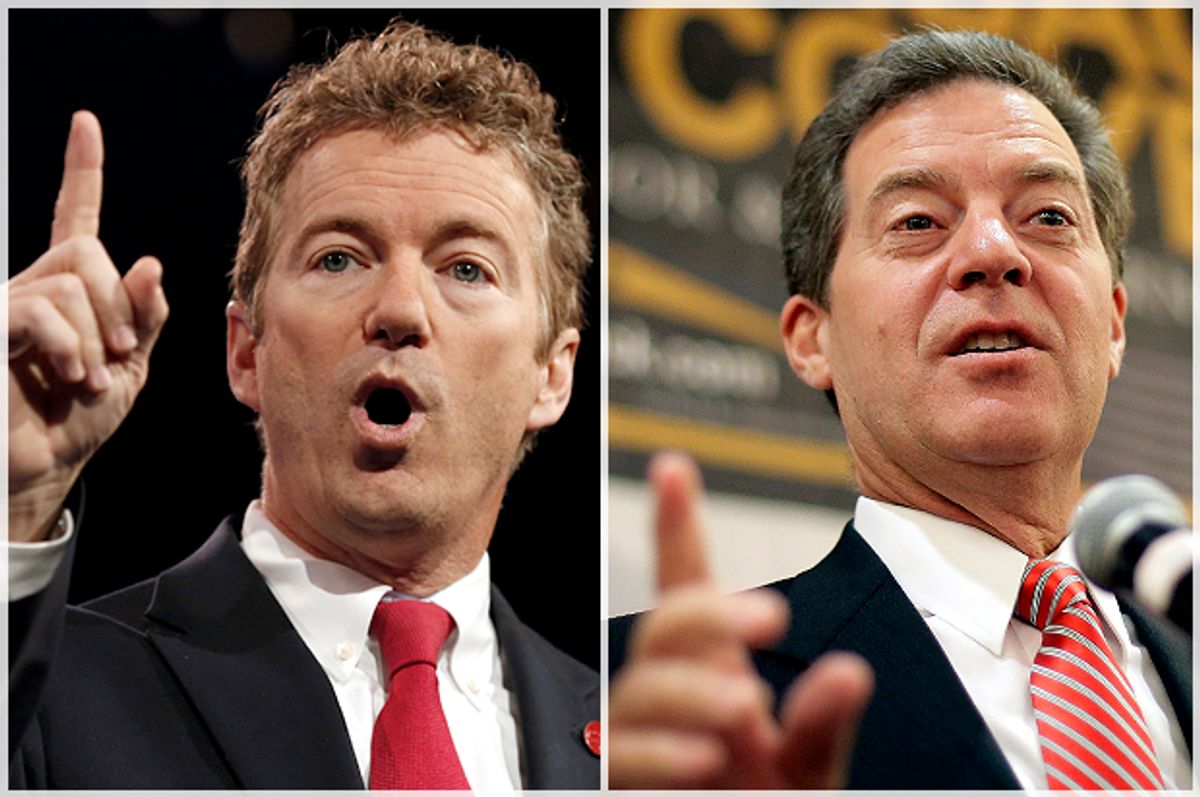 Libertarian-ish Republican presidential candidate Rand Paul debuted his new plan to “blow up” the federal tax code yesterday, and if you haven’t read Jim Newell’s scorching take on it, then there’s something deeply flawed with you and you should remedy it immediately. The gist of Paul’s plan (replacing the current tax structure with a 14.5-percent flat tax) is the gist of basically every Republican tax plan: massive transfers of wealth up the economic ladder with a few paltry scraps thrown to the middle class that allow Republicans to claim they’re focused on “working families.”

As Paul’s Wall Street Journal op-ed notes, he crafted this plan with the assistance of some of the high priests of supply-side economic theory: frequently and flagrantly wrong bozo Stephen Moore, flat-tax evangelist and dimwit billionaire rights activist Steve Forbes, and the also frequently wrong Art Laffer, who launched the trickle-down revolution that’s given us over three decades of bad economic policy. Anyone familiar with these knuckleheads and the economic philosophy they espouse should already know what they’re promising with Rand Paul’s tax scheme: huge tax cuts aimed primarily at corporations and the wealthy will supercharge the economy and produce untold millions of jobs and untold trillions of dollars in tax revenue.

Rand’s op-ed describes the effect as a “steroid injection” right into the economy’s underdeveloped buttocks:

Here’s why this plan would balance the budget: We asked the experts at the nonpartisan Tax Foundation to estimate what this plan would mean for jobs, and whether we are raising enough money to fund the government. The analysis is positive news: The plan is an economic steroid injection. Because the Fair and Flat Tax rewards work, saving, investment and small business creation, the Tax Foundation estimates that in 10 years it will increase gross domestic product by about 10%, and create at least 1.4 million new jobs.

I’m intrigued by the “steroid” metaphor, and not just because it implies that Paul’s plan is unnatural and will have myriad undesirable side effects. (What does economic bacne look like?) Mainly it interests me because it’s very similar to a metaphor used by another politician who promised great things from his Art Laffer-inspired tax plan: Kansas Gov. Sam Brownback.

Brownback came into office intending to transform Kansas into a laboratory of conservative economic theory, and he consulted with Laffer – who earned a cool $75,000 for just a few days’ work – to craft the tax plan of supply-siders’ dreams. It obliterated taxes on small businesses and deeply cut tax rates for top earners, all with the assumption that the cuts would quickly kick the state’s economy into overdrive. Brownback’s preferred way of describing his plan was to liken it to an injection of adrenaline. Removing taxes on small businesses, Brownback boasted at a 2012 economic conference, would be like “shooting adrenaline into the heart of growing the economy.”

Laffer and Moore were no less sanguine about the immediate impact of the tax scheme Brownback had cooked up. They co-wrote a September 2012 paper for The Laffer Center For Supply-Side Economics in which they argued that tax cuts in states like Kansas would produce “near immediate and permanent” economic benefits:

The quality of schools also matters as does the state’s highway system, but it takes years for those policies to pay dividends, while cutting taxes can have a near immediate and permanent impact, which is why we have advised Oklahoma, Kansas, and other states to cut their income tax rates if they want the most effective immediate and lasting boost to their states’ economies.

Those immediate benefits never materialized. Kansas’ economy lagged badly after Brownback's cuts went into effect and it continues to stumble. The tax cuts resulted in massive revenue losses that plunged the state into a budget crisis that it hopes to fix by slashing spending and raising taxes on the poor.

But Laffer and Moore, of course, don’t think anything has gone awry. They once promised a “near immediate and permanent” economic boost from Kansas’ tax cuts. Now they’re telling people to be patient because tax cuts take time to work. “You have to view this over ten years,” Laffer told the Kansas City Star earlier this year. “It will work in Kansas.” Moore is similarly incredulous at people who claim that the Kansas tax cut experiment hasn’t worked. “As for Kansas, the tax cut has been in effect a mere 18 months,” he wrote last July, “not a lot of time to measure the impact.”

Of course, now they’re promoting a new plan with Rand Paul, and it will be like a “steroid injection” for the economy instead of an adrenaline shot to the heart. Maybe they’ll be right this time. But even if they aren’t, they’ll never admit to being wrong.