The GOP's staggering Charleston cowardice: Why are so many Republicans so scared of admitting the truth?

When it comes to the Republican Party, terrorism in South Carolina will never, ever be described as such 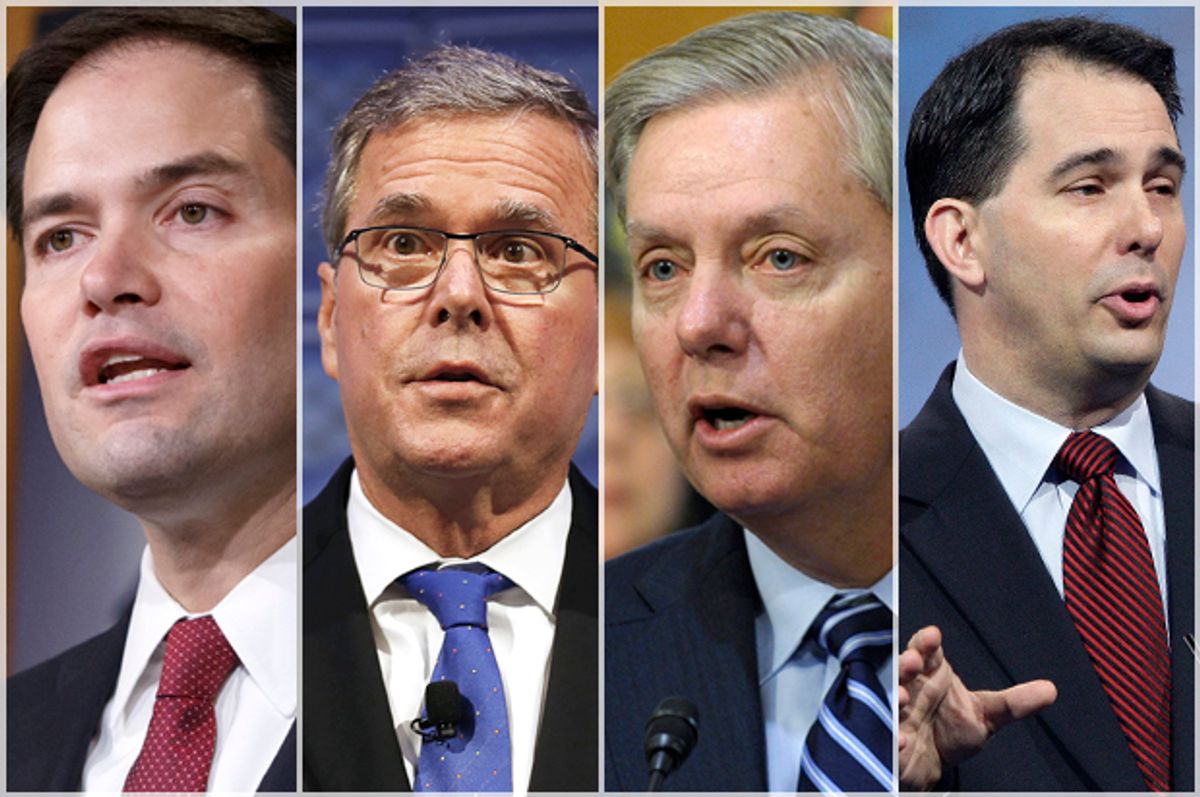 It's an odd feature of American life today that so many people are frightened to death at the prospect of a Muslim jihadist perpetrating an act of terrorist violence, even as they accept mass killings as if they are routine.  It happens with such regularity that it's almost as if Americans see them as acts of nature, like hurricanes or earthquakes. And yet the mere possibility that someone inspired by ISIS might do exactly what Americans motivated by political grievance, social isolation, racist hatred, mental illness or some mixture of all of them do -- with some frequency -- strikes people as a fundamental threat to all we hold dear. Maybe it's natural. But it's also irrational.

America has a major problem with mass murder, virtually all of it carried out using guns. In fact, our high level of violence generally is one of the defining characteristics of our "exceptionalism." It's true that there are Lone Wolf would-be terrorists inspired by Islamic extremism. But that is far from the only terrorism this country faces. It's not even the worst terrorism this country faces.

In a startling coincidence, just two days before the Charleston massacre an op-ed in the New York Times reported on the growing right-wing terrorist threat in America:

Despite public anxiety about extremists inspired by Al Qaeda and the Islamic State, the number of violent plots by such individuals has remained very low. Since 9/11, an average of nine American Muslims per year have been involved in an average of six terrorism-related plots against targets in the United States. Most were disrupted, but the 20 plots that were carried out accounted for 50 fatalities over the past 13 and a half years.

In contrast, right-wing extremists averaged 337 attacks per year in the decade after 9/11, causing a total of 254 fatalities, according to a study by Arie Perliger, a professor at the United States Military Academy’s Combating Terrorism Center. The toll has increased since the study was released in 2012.

Other data sets, using different definitions of political violence, tell comparable stories. The Global Terrorism Database maintained by the Start Center at the University of Maryland includes 65 attacks in the United States associated with right-wing ideologies and 24 by Muslim extremists since 9/11. The International Security Program at the New America Foundation identifies 39 fatalities from “non-jihadist” homegrown extremists and 26 fatalities from “jihadist” extremists.

You may recall a few years back when the Department of Homeland Security issued a report warning about a surge in right wing extremism, including white supremacist violence, and was met with a furious response:

In fact, in the horrific massacre in Charleston this week, we can see the systemic structure of our All-American terrorism, much of it perpetrated down through our history by White Supremacists. The church where the murders took place is a monument to our terrorist past going all the way back to the 1800s, when  Denmark Vesey led a slave rebellion  that was plotted in that very church. It's extremely unlikely that this young racist murderer chose that place at random.

(A) involve acts dangerous to human life that are a violation of the criminal laws of the United States or of any State;

(i) to intimidate or coerce a civilian population;

(ii) to influence the policy of a government by intimidation or coercion ; or

(iii) to influence the policy of a government by mass destruction, assassination, or kidnapping; and

(C) occur primarily within the territorial jurisdiction of the United States.

There are reasons for this, none of which have anything to do with religion. It has always had everything to do with the role the churches play in politically organizing the black community. White supremacists still see these institutions the way they did when Denmark Vesey organized a slave rebellion -- as a threat. They are where black people have empowered themselves for centuries.

That history didn't stop certain members of the right-wing from trying to be too cute by half in the wake of Charleston by making the ludicrous assertion that this latest terrorist act must have been an attack on Christianity. As usual, the most imbecilic commentary came from Fox and Friends' Steve Doocey who said:

Extraordinarily, they called it a ‘hate crime,’ and some look at it as, ‘Well, because it was a white guy and a black church,’ but you made a great point earlier about the hostility towards Christians. And it was a church. So maybe that’s what they were talking about. They haven’t explained it to us.”

Doocey undoubtedly has little knowledge of the history of terrorism against African American churches -- he has little knowledge of anything -- so perhaps it's unfair to expect him to go off Fox's message of right-wing victimization. He was joined by conservative African American commentator E.W. Jackson in this absurd assumption, who should have known better. And Senator Lindsay Graham has absolutely no excuse for this comment when he appeared on The View

“There are real people who are organized out there to kill people in religion and based on race, this guy’s just whacked out. But it’s 2015. There are people out there looking for Christians to kill them.”

Unfortunately for these conservatives who very cleverly tried to fit this heinous crime into their own narrative of religious victimhood, the perpetrator of this crime made it very clear that this was an act of racist terrorism. It's embarrassing that they even tried.

Throughout the last 24 hours the right has been doing the usual handwringing over the "politicization" of this mass murder as if it wasn't inherently political. Dylann Roof politicized it when he stood up in that church, shot 9 people and told one woman that he was letting her live so that she could tell people why he did it: "You are raping our women and taking over the country.” One of the people he assassinated in cold blood was a prominent black politician. That is the terrorist act of a right wing extremist and the political statement of a white supremacist.  He was following in a very long tradition of such terrorist acts and political statements.

The question is why so many Republicans are unwilling to admit this obvious fact. Why do they object so strenuously to anyone looking too closely at this surge in extremist activity? Who are they afraid of offending?