Black faith is under attack: How to make sense of white supremacy's Charleston crimes

For generations, Black Americans have turned to the Church for safety & comfort. Here's how to reclaim that space 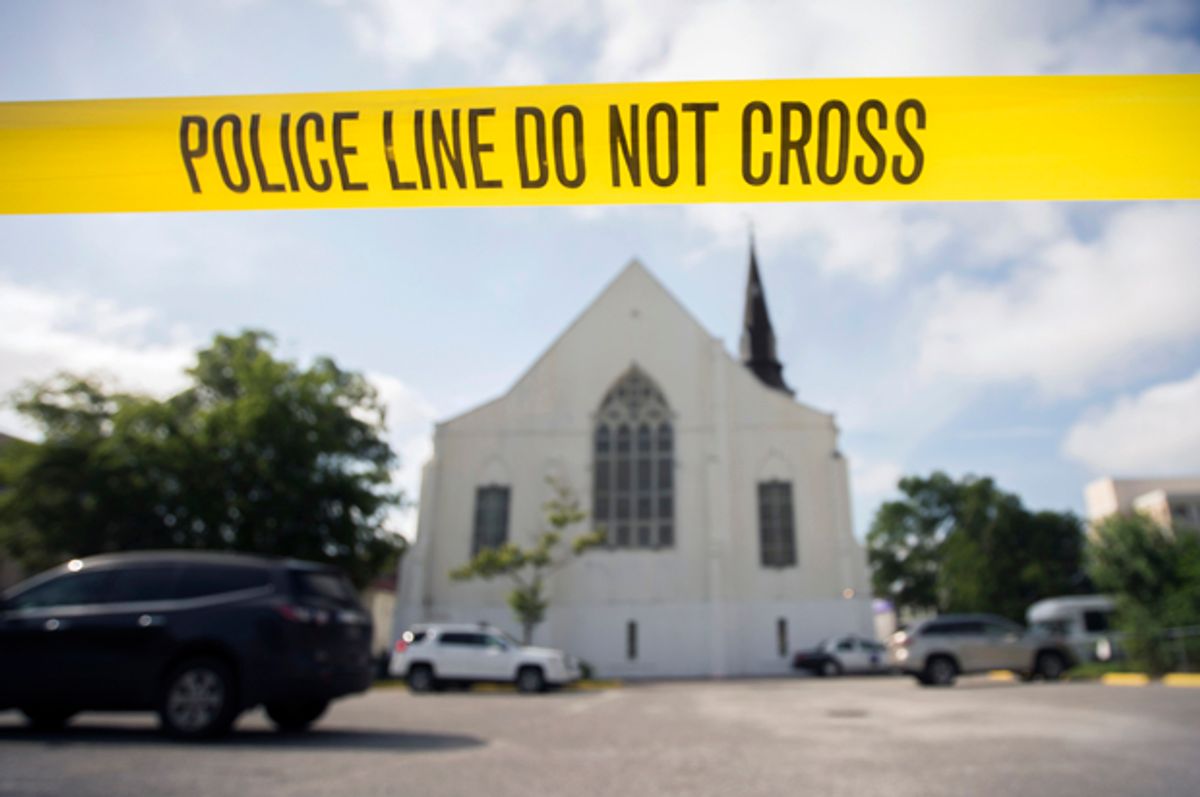 When I woke up on Thursday morning, the world was different (again). While I slept, nine people were murdered attending Wednesday night Bible study at Emanuel African Methodist Episcopal Church in Charleston, South Carolina. Rev. Clementa Pinckney, Sharonda Coleman-Singleton, Cynthia Hurd, Tywanza Sanders, Myra Thompson, Ethel Lee Lance, Rev. Daniel L. Simmons, Rev. Depayne Middleton-Doctor, and Susie Jackson lost their lives during a midweek service in which they welcomed a newcomer, Dylann Storm Roof, who would later turn a gun on them, careful to leave a living witness to recount the details of what happened. It does not escape me that it was witnessing -- a term used to refer to an act of Christian discipleship where one shares their faith with nonbelievers -- that likely resulted in Roof’s invitation to join the weekly gathering, and it was the need for an (eye)witness that led him to intentionally spare the life of one of the victims.

The racist and terrorist act was premeditated and deemed a hate crime, even though some media pundits insisted that it was motivated by antagonism towards Christianity, not black people. I believe it was both. The shooting was not only an assault on black humanity, it was an attack on black faith, which is one of the few things black folk have left in the face of so much loss, despair and ongoing oppression. For generations, black folk have turned to their religious faith and to the church for comfort during times of social injustice (as evidenced in the rich and storied history of Emanuel Church).

Now, one of the few safe spaces that black folk can seek out for refuge has been turned into a crime scene.

Roof’s targeting of a place of worship is an attempt to compromise the safety and sanctity of the black church. Before Wednesday night, the black church seemed to be one of the few places left where black folk could assemble in public and feel seen, recognized, heard, loved and welcome. (We know from the not-so-distant past that those spaces are not the private communities in which we live, not store parking lots, not Walmart stores, not public parks, not street corners, not swimming pools, not even our homes.)

And, truth be told, while traditional black churches are safe spaces from white supremacy, they have long been unsafe spaces for folk who are gender non-conforming, same-gender loving, or women. It is important, as we hold up the black church as a whole after this tragedy, that we also hold it up to scrutiny, so that as we do the work of making church spaces safe again, we make sure that they are safe for all of us, all of the time.

I believe this moment is an opportunity for the black church to re-establish itself through the proven resiliency of black faith, and become a safe and welcome space for all believers. This is a moment to understand that in order to fight and resist white supremacy we must also dismantle and fight its co-conspirators: homophobia, transphobia, and sexism. Many times churchfolk and skinfolk are afraid of the wrong things. It is white supremacy, not nonheterosexuality, that threatens the lives and legacies of black folk in this country. It is white supremacy, not premarital sex or babies born out of wedlock, that jeopardizes our survival. It was white supremacy, not insanity, that caused Dylann Roof to walk into a black church intending to walk out with blood on his hands. We need healing that is corporate, collective, consistent and accountable.

The victims of the shooting should not have to be martyrs, hashtags, or statistics to show, once again, that our country continues to fail at holding white supremacy accountable for the death it perpetuates. This is a moment of love but also of accountability. We can hold well-meaning white allies accountable for being speechless while we are being senselessly murdered, and being sensitive and offended when we express our outrage. We can hold our policymakers accountable, insisting that the Confederate flag, a symbol of anti-black hate, be removed from government spaces (to make them safe for people of color). We can hold our churches and places of worship accountable, requiring inclusivity over conservatism, and demonstrating agape love out in the open.  We can hold ourselves and our loved ones accountable, in all the ways we need and all the ways we know, because, as Audre Lorde taught us, our silence will not protect us.

We are living in a moment where being black is equally commodified and criminalized, where black people are fighting for dignity, security, humanity and the very right to blackness. This moment is a reminder that in a so-called post racially progressive world, being black remains simultaneously the most marketable, profitable, co-optable and dangerous identity marker one can hold. To be black is to be vulnerable no matter where you are and no matter where you go. To be black is to carry a marker on your skin that racists will use to identify you and in some cases kill you. Despite claims of colorblindness, or so-called transracialism, the black victims in church on Wednesday night could not claim whiteness to save themselves. It was, in fact, the pervasive lie of whiteness that cost them their life.

If ever there was a place where black folk believe themselves to be free, it is within the walls of the church. There we dance, cry, pray, praise, shout, sing and testify. The doors are always open. Despite the personal challenges I have with the church, it has remained a beacon of hope, a place of healing and possibility, a refuge in times of trouble, and a safe space for lost souls and people in need, regardless of race. As a non-church-attending black woman who identifies as a Christian, I refuse to relinquish my faith to this tragedy. I refuse to allow Roof’s hate to be the end of the story. I refuse to concede that we cannot, as a people, carve out spaces for each other and make room for one another (including difference) within and without the four walls of the church.

This is for white girls who pretend to be black girls when white supremacy isn’t enough. This is for black Christians who believe respectability will save our lives in the face of perpetual anti-black hetero-patriachal white supremacy, when evidence to the contrary is consistently given. This is for those of us seeking hope and holding on to faith but lacking patience. This is not enough, but it is a beginning.