"Sick in the Head," Apatow's new book of interviews, is full of comedians showing each other the love 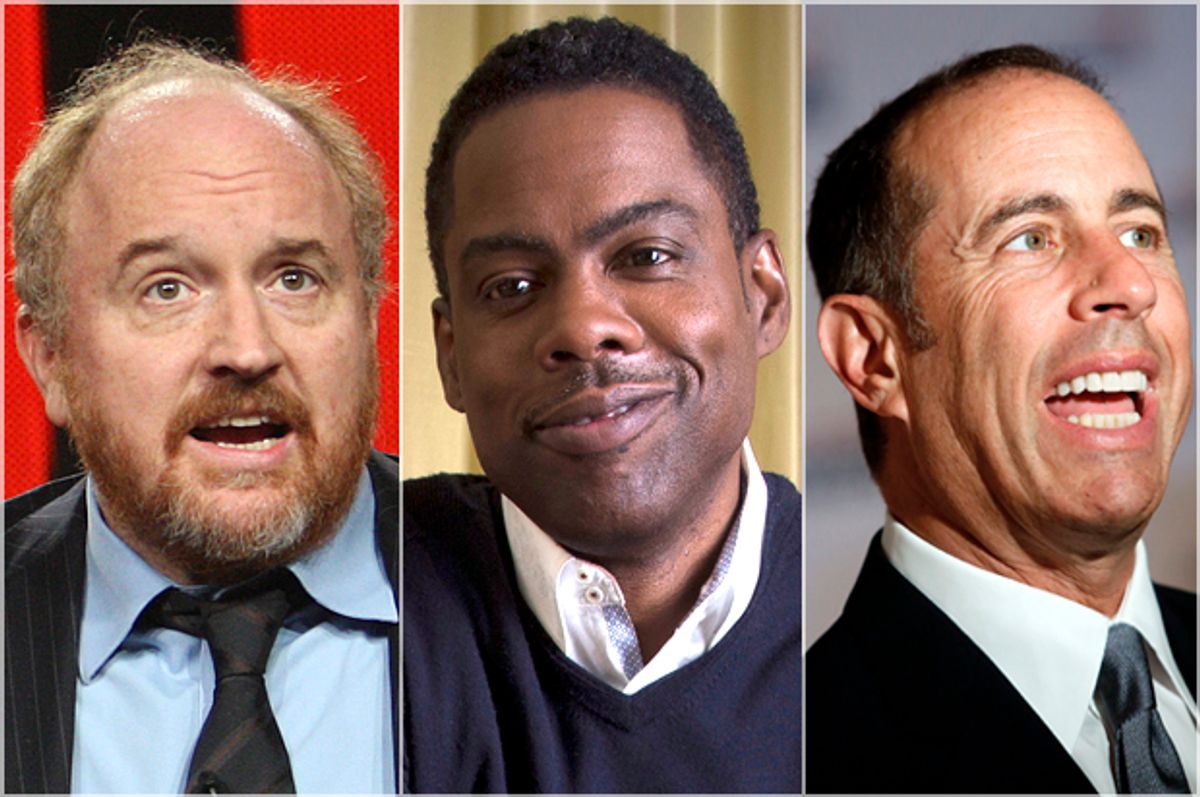 Judd Apatow’s new book, “Sick in the Head,” consisting of 37 interviews conducted with other comedians over the years, is essentially a love letter to comedy. As Apatow writes in the introduction, “I have been completely obsessed with comedy for about as long as I can remember,” explaining that “by my fifteenth birthday, my obsession was full-blown. I needed to become one of them. The question was, how to do that? And the answer seemed clear: Meet them. Talk to them. Get to know them. Learn their secrets.” As a teenager, Apatow interviewed a number of his idols as part of a high school radio show he hosted, and “these interviews would inform the rest of my life. They contained the advice that would help me attain my dreams."

The resulting book, which features interviews spanning four decades with comic luminaries from Michael O’ Donoghue and Garry Shandling to Amy Schumer and "Key & Peele's" Jordan Peele and Keegan-Michael Key, contains personal tributes to each of Apatow’s subjects, from praising Louis C.K. (“one of those people who are so brilliant and funny and uncompromising that sometimes I need to avoid their work”) to gushing over Lena Dunham (“every moment with her has been a joy”).

But Apatow isn’t the only one who showed up for the love fest. Indeed, the book isn’t just comics talking to comics, much of it is comics talking about comics, praising their contemporaries and the comedic idols that came before them, and name-checking the industry luminaries who have inspired and guided them throughout their careers. Here are eight of the book's fondest moments of comic-on-comic praise:

In an interview from 2014, Colbert spoke about his admiration for David Letterman -- whose "Late Show" desk he will be taking over in the fall -- describing himself as Letterman's "ur-audience." As he put it: "His show started in ’82, the year I started college. Dave was it. Johnny was great, I loved Johnny. I’m the youngest of eleven children, and my elder sisters would wake me up to watch Carson with them because they didn’t want to watch it alone. I would be like a toddler watching Carson with them, but Dave — Dave was like us. Dave was stupid. And I loved it. His disrespect was to his own form.”

Rock had a lot of praise for his fellow comics, from Eddie Murphy ("the funniest man on earth") to Richard Pryor (Rock said being praised by Pryor was one of "the highlights of my life"), but perhaps his strongest words were for stand-up legend Jerry Seinfeld. As Rock put it: “Jerry’s got no fucking pressure. God bless him, Jerry Seinfeld, one of the greatest comedians of all time and one of the cockiest bastards to ever live … To his credit, he writes some of the best jokes ever. He really does. I mean, they’re like Billy Joel songs, you know what I mean?… That shit’s American. Everybody likes those records. And Jerry Seinfeld writes jokes like that. Everybody gets those fucking jokes. I’ve seen that guy work fucking Mexican crowds, black crowds, it doesn’t matter. It doesn’t matter. He’s fucking cocky and kills every night.”

In this interview from 2005, the late Harold Ramis spoke fondly and at length about his longtime collaborator Bill Murray, despite the fact they had hardly spoken since a falling out in the early '90s. As he put it: “I’m attracted to outlandish and excessive human behavior. Any experience with Bill Murray is better than any other experience because he does things no one you know would ever do. Every ride with Bill is a potential adventure. I say this with love and considerable distance, because I don’t talk to him and I don’t see him."

In a fascinating interview with Louis C.K. from 2014, before the sexual assault allegations against Bill Cosby reached a cultural tipping point, C.K. spoke out about his childhood admiration for the now-disgraced comic (Apatow -- who would later come to be one of Cosby's most staunch critics -- also referenced his admiration for the comic in his introduction to the book, with the caveat that he "was going to talk at length about Bill Cosby, but I can’t, in good conscience, because he has more sexual accusers than I have had partners.")

As C.K told Apatow: “My first love was Bill Cosby. My friend Jeff had a whole stack of his records; we would just sit and laugh. I loved the sound of it. I loved the sound of his voice and hearing the audience and the nightclub feeling and how it sometimes felt like a concert. I used to listen to how the record sounded. Oh my God, I just like — it put a real lust in me… I wish I could control myself like he did. I wish that I could…talk…like…this…on…stage. Respect the negative space. Respect the silence, let it alone. I wish I had that kind of control.”

The rising star -- who transitioned from the "SNL" writer's room to "The Daily Show" back to "SNL's" Weekend Update desk in less than two years -- talked about running into one of his comedic idols, Steve Martin, at an after-party. As he put it: “I got to talk to Steve Martin about comedy and that was just like, what the fuck. This is the biggest comedian in the world. Like, he was the guy. This was a stadium comic, you know. And I’m saying that to him And he’s like, ‘Yeah, yeah, but that was nothing. That was a long time ago.’ He’s talking to me about comedy as if he’s never done it before. He’s like, ‘What do you do? Do you prepare? How do you prepare? Do you write it down first?’ And I’m like, What the fuck? You’re Steve Martin, man.”

After reminiscing about their stand-up days together back in the '80s, Garlin shared some warm words about Chris Rock, saying: “You know what’s sad? When you see Chris Rock at midnight at the Comedy Store working out his act and what he’s working out is better than anything you’ve ever written. It’s just so sad and frustrating and you’re laughing and you’re going, You fucker. You’re that good.”

Apatow's forthcoming "Trainwreck" collaborator Amy Schumer spoke about her recent appearance on Jerry Seinfeld's web series "Comedians in Cars Getting Coffee," explaining how hearing Seinfeld talk about comedy completely altered her thinking. As she put it, “He completely changed my philosophy about stand-up. He was like, ‘This idea that your generation has about ‘you have to burn your material and start fresh every time’ - it’s just so self-important. Not everyone’s watching everything you do, you know.’ He said, ‘Focus on coming up with your best act for a live show.’" Seinfeld has been the most vocal opponent of the current trend in comedy where comedians overhaul their acts every year, a trend that people like Louis C.K. vehemently disagree with him on. Yet Schumer says that hearing Seinfeld talk "changed [her] thinking."

The "Simpsons" co-creator talked to Apatow about working on "Taxi" with the legendary Andy Kaufman, saying: “I tell Andy stories all the time. How can you resist Andy stories? He invented performance art, just amazing, bizarre stuff. But when you gave him notes, he’d be in that character, and you’d give him notes and it would be like he was Latka with an  American talking fast at him. And then he’d do the note. He’d always do the note.”