My son was murdered in the Isla Vista shooting. I'm spending this Father's Day telling his story

Chris won't be with me to celebrate on Sunday, but I can celebrate his life, and work to prevent more killing 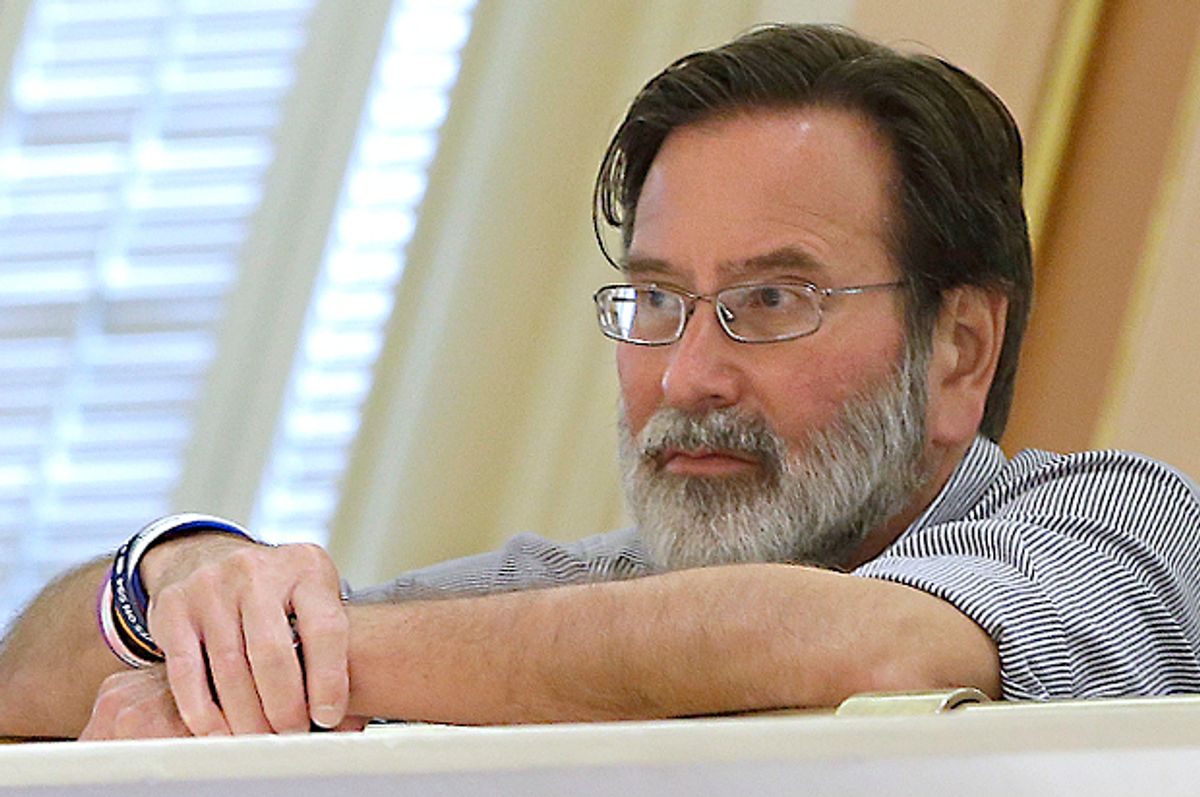 A photo of the author at the Senate debate over a bill to issue a temporary "gun violence restraint order" in Capitol in Sacramento, Calif., Wednesday, Aug. 27, 2014. (AP/Rich Pedroncelli)
--

What does Father’s Day mean for someone whose only child is no longer living? It is something I have struggled with since last Father’s Day, which came less than a month after my only son, Christopher Ross Michaels-Martinez, was shot and killed in the Isla Vista mass shooting on May 23, 2014. He was 20 years old, and he meant the world to me.

The last time I saw Chris alive was on Mother’s Day 2014. Like every day we had together, it was filled with laughs one minute and serious conversations the next. On this Mother’s Day, a little more than a year after his death, without thinking I picked up the phone and did what I do every year – I left a message for Chris’s mother: happy Mother's Day. My brother, who overhead me, was appalled. He pointed out that my message would needlessly upset her, so I called back and left a message apologizing for my thoughtlessness. Surprisingly, she returned my call and left her own message: She was not upset by my message – she was happy to have been Chris' mother. While she will never see Chris graduate from college, never see him get married or have a child, she still was, and will always be, his mother.

Chris won’t be with me to celebrate this Father’s Day, but I’m still his father. And I can celebrate his life, the amazing person he was, and would have become. I recently had the opportunity to meet with a number of Chris’ classmates at UCSB. Some were close friends who shared personal stories of their time together. And others were people who weren’t necessarily close to Chris, but whom he touched along the way. One student in particular told me he never had a social group, never felt like he fit in anywhere. But Chris would always reach out to him and make him feel included. Chris touched his life, and I know there were many more lives he was meant to touch.

Immediately after the shooting I was consumed with anger, and insisted “Not One More” family should have to bury a child because of senseless gun violence. I have chosen to make this my life’s mission. This mission is deeply personal, because by speaking out and sharing my story, I am keeping Chris’ memory alive, allowing him to continue to touch people even though he is not physically here.

I’ve been to statehouses, house parties and rallies all across the country appealing to voters and legislators, pleading with them to consider Chris’ story, and the stories of the 88 Americans who are shot and killed every day.

Over the past year I’ve learned a lot about gun laws and about gun violence. The gun lobby has gotten away with successfully pushing dangerous legislation for decades. But, things have changed: California passed a new red-flag law last year, AB 1014, which will allow family members and law enforcement to ask a judge to temporarily suspend a person’s access to firearms if they have documented evidence that that person poses a serious threat to themselves or others. In Florida, with the help of students, moms and law enforcement, we defeated six separate bills that would have forced colleges to allow guns on campus and allowed guns in K-12 schools.  It was the NRA’s top priority this year in that state. In Oregon, lawmakers just passed a background check bill to finally close the loophole that allows guns to be sold with no questions asked. The victory came just six months after voters in Washington state passed background checks by ballot measure.

But it’s not just the legislative wins that keep me going. I’m inspired by other survivors I have met along the way. I want to fight in honor of the lives of their loved ones, right alongside the life of my son.

Seeing the tragic news in Charleston, South Carolina: nine dead. In a church. Something is very wrong when we can’t feel safe in a place of worship and that community deserves better. We all deserve better.

So on Father's Day I’m celebrating my son’s life and thinking of other fathers out there in our country. I’m sharing Chris’ story, and I’m seeing the difference that we’ve made in the past year. Even though he is not with me, I will always be Chris’ father. So if you see me, don’t hesitate to wish me a happy Father’s Day.

Richard Martinez is a senior outreach associate at Everytown for Gun Safety.