Pennsatucky's redemption: How "Orange Is the New Black" pulled a reverse "Breaking Bad"

We met a clownish Appalachian stereotype in Season 1: Violent, bigoted, dumb. Now, her true self is emerging 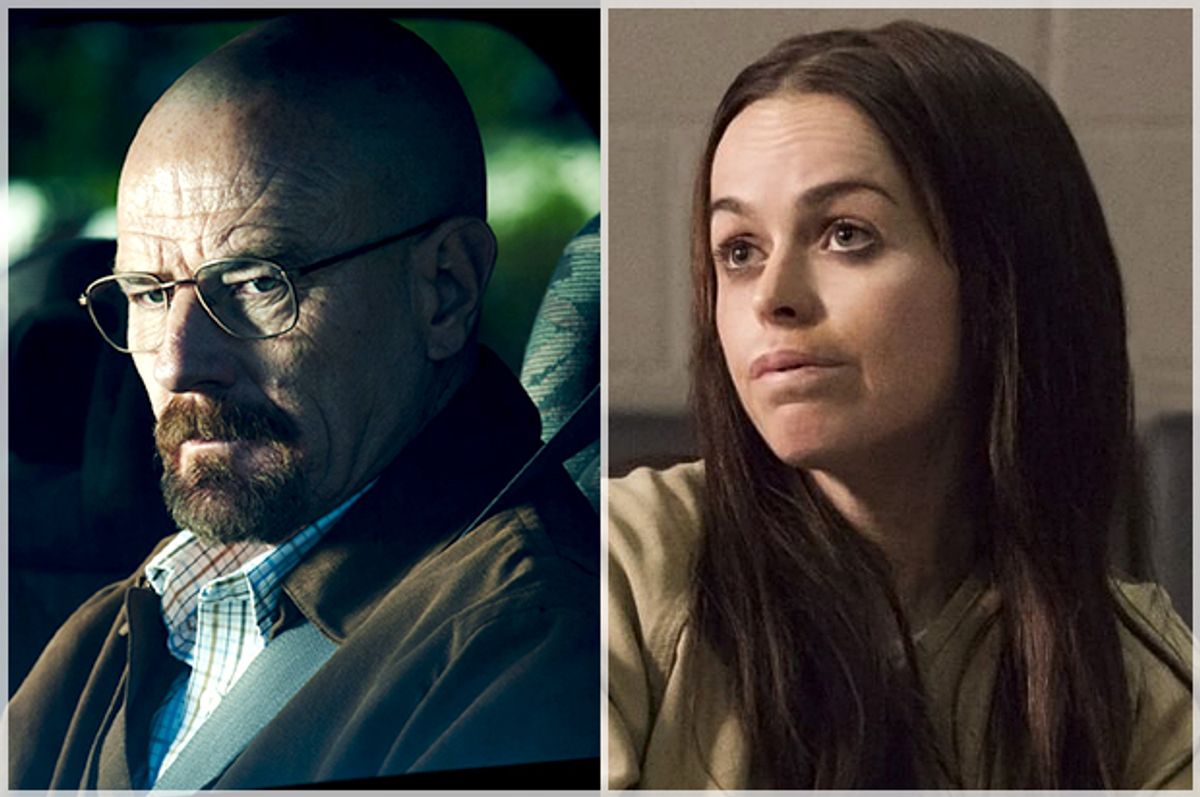 In the first episode of this season’s "Orange Is the New Black," Pennsatucky makes a graveyard out of popsicle sticks shaped like crosses for each of the babies she aborted, each one with its own name. She cries as she prays for them, until Boo, a self-described bull-dyke who has gone from her adversary to friend, gives her a pep talk about how aborting her unborn babies was probably the best thing she could have done for them.

In Season 1, Tiffany “Pennsatucky” Doggett is a villain whose intense racism, homophobia and illusions of grandeur culminate in her attempt to murder Piper. By Season 3 she becomes one of the shows most big-hearted, likable characters—a person who is shown to be multifaceted and capable of thoughtful evolution.

For the past several years, great television has been defined by the archetype of the antihero. Shows like "The Sopranos," "Breaking Bad" and "Mad Men" have centered on the lives of morally corrupt men, whom we learn to sympathize with and even admire.  "Orange Is the New Black" has always offered a radical spin on this by showing how complex female antiheroes can inspire as much admiration and awe as any male criminal mastermind. This season, however, "OITNB" goes beyond that central premise, by showing viewers that what has been most compelling about the antihero is not necessarily their propensity for evil, but their propensity for change.

On the surface, Piper’s shift from wide-eyed Pollyanna prisoner to cold-eyed criminal seems the more obvious connection to Walter White’s subtle transformation from good, moral man to supervillain in "Breaking Bad." In reality, Piper Chapman is one of the least interesting characters that we encounter this season. Her evolution does not seem surprising or revealing in any meaningful way. Piper has always shown the possibility of being cutthroat—now that it is clear her affectations of kindness don’t glean respect in prison, she becomes as much of a bully as the characters she feared in earlier seasons.

No, the true star of Season 3 in regards to subtle transformation belongs to Tiffany. Her slow shift from two-dimensional stereotype of a “white trash meth head” to a fully evolved person is a direct inverse of Walter White’s descent into evil in "Breaking Bad." Many of our initial expectations regarding Walter White and Tiffany Doggett's propensity for good and evil had to do with our assumptions regarding each character’s social class. Tiffany's impoverished background, rotting teeth, simple-minded religious beliefs, and thick dialect made her a caricature of "white trash" even before she threatens Piper. In contrast, Walter White's mild-mannered demeanor, educated background, and middle-class lifestyle always offer him the comforts of being perceived as good, even when he starts to do truly terrible things.

This season all of those assumptions are readily cracked open as we see Pennsatucky express grief at her mistakes and loyalty to her friends, and betray a deep desire to love and be loved. Pennsatucky’s friendship with Boo, which started as a ploy, has become a genuine friendship, with each character betraying a tremendous amount of care for the other. Moments of dialogue between the two show core elements of both their personalities. In one scene Boo expresses shock that Pennsatucky doesn’t feel the need to brush her teeth and Pennsatucky replies using her own strain of logic that porcelain plates don’t need to be brushed. Throughout this season, Pennsatucky’s ignorance is shown to be a product of her home life—a mother who forced her to chug mountain dew so that she could pick up bigger social service checks and who greeted her daughter’s period with a depressing sex talk about how she’ll need to learn to endure the pain of penetration and a warning not to get blood on the couch.

Pennsatucky’s childhood and adolescence becomes the backdrop with which we explore her relationship with new security guard Coates. They share a mutual crush that quickly becomes exploitative, as Coates uses his unchecked power to manipulate, ploy and eventually rape her. Moments with Coates are juxtaposed with moments from Pennsatucky’s youth and her first boyfriend Nathan, who is shown treating her with love, respect and genuine care. In one affecting scene, Tiffany and Nathan watch porn together, which Tiffany had never seen before. She is shocked that the woman on-screen seems to be enjoying sex and even more stunned that her boyfriend is genuinely interested in her pleasure.

Actress Taryn Manning does a phenomenal job inhabiting Doggett’s character fully; her tentative smiles at Coates echo the same furtive glances she gives Nathan at the start of their relationship, one of the only times in her life where we see her being fully loved and respected. Throughout her life, Doggett is abused and taken advantage of, disrespected, neglected and used. In the series, she responds to love wherever she can find it—embracing the religious antiabortion advocates who rally to her side, even though they are also simply using her as a pawn in their own crusade, and jumping at the chance to be Sgt. Healy’s helper when he expresses kindness to her.

Both "OITNB" and "Breaking Bad" play with viewers' expectations about various types of people and whether they deserve forgiveness and redemption. While the last season of "OITNB" focused on sociopathic villain Vee, this season has shifted into a more nuanced exploration of sinners and sin. Cindy goes from pretending to be Jewish in order to get the much better-tasting Kosher meals, to having a true religious awakening that culminates in a mikvah. Likewise, Officer Bennett goes from proposing marriage to Daya, to disappearing completely after spending more time interacting with her frightening family.

By the end of Season 3 it becomes clear that various transformations do not merely betray how characters are changing over time, but also how the viewer is changing in relationship to them. With more information it becomes easier to see Pennsatucky for who she really is, a woman whom life has tried to break in a million ways, but who has never given up on the possibility of redemption. This season’s depiction of Pennsatucky is riveting precisely because even as she evolves and changes, she remains the same core character she was at the very start—we simply have a deeper understanding of who she is beyond the two-dimensional caricature of meth mouth and rage. We see her triumphs and regrets and we see how, faced with the prospect of revenging the man who raped her, that in her heart of hearts she isn’t angry, “I don’t have rage,” she says. “I’m just sad.”