Aziz Ansari & the perils of celebrity feminism: Why coming out for equality can't be enough

Media leave little room for nuanced discussion -- so it's up to feminists not to care, even when they're famous 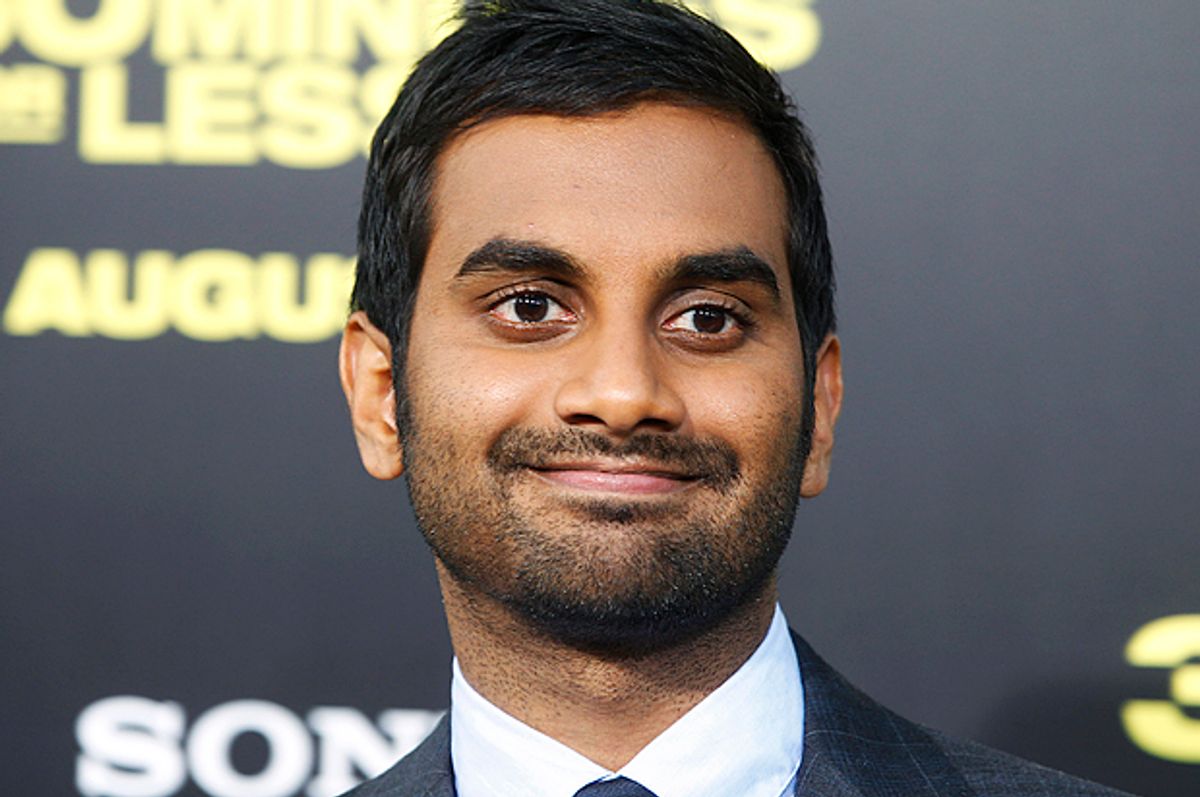 Aziz Ansari is a feminist. You might recall the hubbub of a few months ago over this fact, when he became the latest in a line of celebrities to claim the label, telling David Letterman that being a feminist means “someone who believes men and women have equal rights.” The example he gave to explain his stance -- involving the gender pay gap as it relates, hypothetically, to Beyoncé and Jay Z -- and the other issues he brought up (equal pay, the right to vote, shared domestic responsibilities) were certainly in line with mainstream feminist thinking. Ansari put on a good show.

But his analysis wasn’t especially deep, and ultimately his discussion of feminism pissed a few people off -- perhaps rightfully so. BuzzFeed’s Katie Heaney explained that she was “not impressed” by Ansari’s feminism -- which he outlined as oppositional to the specter of an angry, yelling feminist woman -- identifying it as “a small, easy pill to swallow.” She and other critics also noted that Ansari’s list of key feminist issues were “very particular, and very safe.”

In a later interview with Cosmo, Ansari responded to such criticisms, denying any suggestion that he was “mansplaining” and urging feminist bloggers, in particular, to get their priorities straight:

We just live in this world where people are ready to talk down people on blogs or Twitter or whatever, but to me the test is — let's say you're someone who criticizes things that I said on Letterman. I would just want to sit down and say, "OK, did you really think that I had ill intentions in my heart? Don't you think that what I was trying to say was a positive thing? Did it really seem like I was trying to talk down to women? Did it really seem like that was my intention? Don't you think that, deep down in my heart, I was trying to say something interesting and positive — and funny? Do you really have to write some mean thing? Isn't there much worse shit going on? Am I really the target? Is that really where you want to aim?"

Since then, it seems Ansari has kept on the feminist game, infusing his newfound feminist thinking into his new book, “Modern Romance” -- though it’s not so explicit as before. Ansari’s sociological exploration of contemporary dating (and all its digital, anxiety-inducing weirdness) is “really for everyone,” he told me at an event last week. I’d asked him if he thought there were any important implications of him being a man writing about sex, love and dating -- topics typically written about and read by women -- and he gave a fairly feminist answer, leaving the “feminist” part out.

It’s the sort of answer that reflects that Ansari is living out what he’s preached publicly, at least with regards to how he approaches the general awfulness of being a human dating other humans in today’s world. But a bit later, when faced with a question about why he’d decided to leave the topic of consent out of a book about modern dating -- which, one would assume, would be pretty pertinent, given the ever-expanding feminist conversation around acquaintance rape and campus sexual assault -- Ansari declined to answer.

“It’s a murky territory,” Ansari began. “Honestly, and the thing about bloggers, I’m hesitant to even say anything. I feel like your job is to pull out something I say and make me sound like a monster sometimes.”

Ansari added that he was kidding -- “I know that’s not your goal” -- but I’ll grant him this: That is what would have happened. It would be a lie to say that media outlets don’t seek out the most salacious bits of commentary, pop 'em between some quotation marks and throw the whole thing into a damning headline for clicks. And it would be wrong to suggest that Ansari, by virtue of saying publicly that he believes people should have equal rights, necessarily needs to have a sound-bite-style response to a question about consent. He's already brought this up. As feminists, we’re not required to be experts on every feminist issue -- but we should be talking about them.

And that could be the benefit of celebrity feminism -- the talking part -- if there were room to engage. But without that space, what’s the point?

The seeming pointlessness is not simply because of the media outrage machine, though that plays a role. But, as happened with Ansari’s coming out as a feminist on Letterman, the outrage is often warranted, and has an important place in the conversations that need to be had. It’s sometimes what makes for a conversation, when the sound bites in question aren’t just being aggregated, but analyzed and expanded upon. Hesitation to discuss difficult issues on Ansari’s part might be warranted, but it’s not something that gets us any further along socially.

And that’s what should be the point of celebrity feminism: coming out as someone who thinks long and hard about key feminist issues -- or even just recognizes what those issues are -- and not shying away from them for fear of backlash. Shying away because one feels uninformed is one thing, but there’s a lesson to be learned even from that: get informed. Unfortunately, it’s not quite enough to say before an audience that equality is a good thing. The work of public feminism is much messier than that. And in this world that’s messier still, it should be.