GOP's fear of a black America: The long, racist history which explains Dylann Roof and stains the so-called "party of Lincoln"

Dylann Roof's assault was the latest salvo in the racial struggle we have fought since 1865: Who owns America? 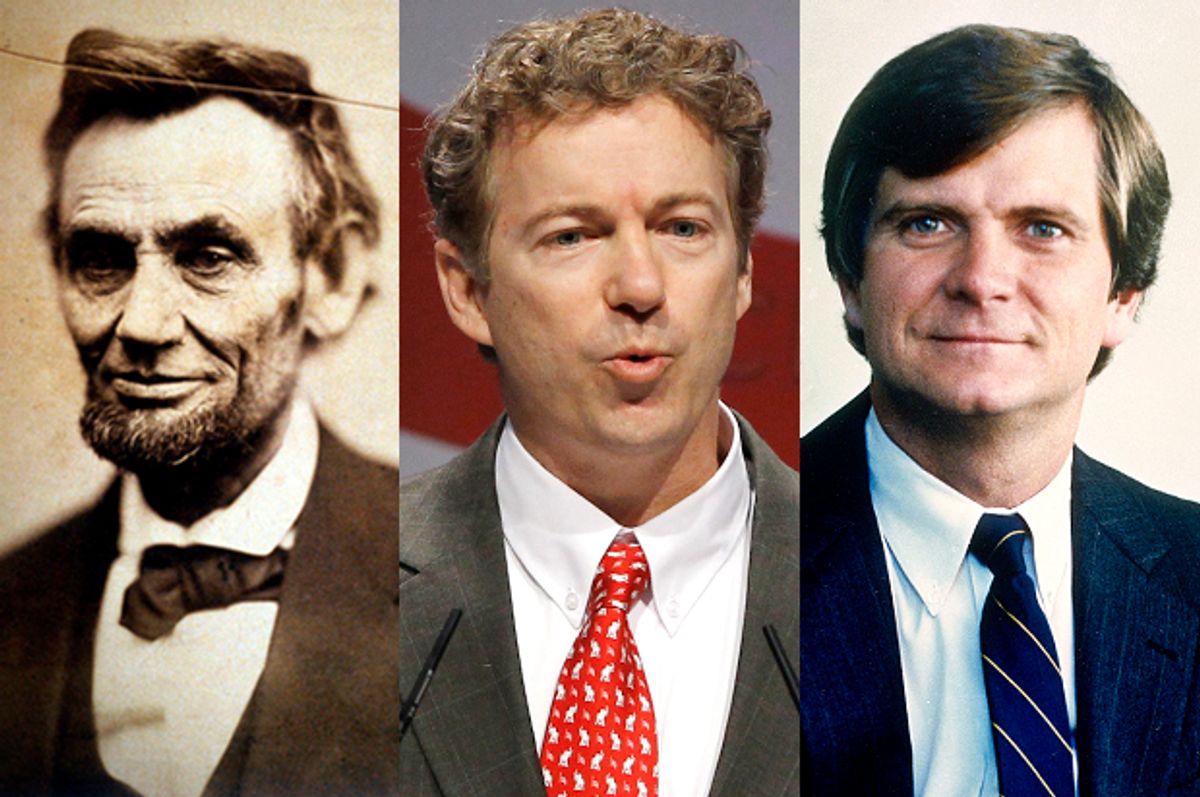 Dylann Roof’s murder of nine people worshipping at Charleston’s Emanuel African Methodist Episcopal Church was not about mental illness; it was not about religious freedom; it was not an “accident;” it does not defy explanation. His attack on nine African Americans in a church was a political attack designed to keep the government in the hands of white men. His bullets were a salvo in the fundamental struggle that we have fought bitterly since 1865: Who owns America?

When the 21-year-old white man killed six women and three men, including pastor and South Carolina state senator Clementa Pinckney, he reportedly said: “I have to do it. You rape our women and you’re taking over our country. And you have to go.” Roof’s words seem bizarre—not just because black Americans make up less than 15 percent of the population but also because he murdered six women—but they made more sense when they first entered the American vernacular. His statement hails straight from the Reconstruction Era after the Civil War, when white Southern men had to come to grips with the fact that they would no longer control the country.

Men like Roof are staring at that same reality today.

Before the Civil War, white Southern Democrats controlled American politics. They used the government to prop up the system of racial slavery that brought money, social status, and political power to wealthy white men. But when Southern leaders tried to spread their system across the nation, northern Republicans, who were largely men-on-the-make, organized to stand against them. Republicans insisted that in America, every man should be able to rise, and should have a say in the government to make sure wealthy men could not manipulate the laws to their own advantage. Once in power, Republicans used the government to give all poor men land, education, and, in 1865, freedom.

In the wake of the Civil War, white Southern Democrats initially refused to face the reality that they would have to share any sort of economic, political, or social power with their former slaves. President Andrew Johnson, himself a Democrat, took over from the slain President Lincoln during Congress’s long summer recess. He pardoned all but about 1,500 white Southerners, and demanded little from white legislatures in the South seeking readmission to the Union except that they ratify the Thirteenth Amendment abolishing slavery. State legislators ratified the amendment, but then promptly set about recreating antebellum conditions of racial servitude with what were known as “Black Codes.” In most states, black people could not own guns, had to sign year-long work contracts, and could be arrested on charges of “vagrancy,” fined, and then bound to anyone who paid their fine. Nowhere could a black person testify in court against a white person, which meant that no black southerner could claim the protection of the law against theft, rape, or murder.

With the return of their states to the Union and with the Black Codes in place, Southern Democrats were poised to retake control of the national government and return it to its prewar defense of property.

But when Congress reconvened in December 1865, Northern congressmen refused to return the same African Americans who had fought for the Union to quasi-slavery under the very men who had spent four years trying to destroy the nation. As a condition for readmission to the Union, Congress put forward the Fourteenth Amendment to give black men legal rights. Southern whites promptly retorted that they would rather remain under military rule than submit to black equality. So northern congressmen passed the Military Reconstruction Act of 1867, which called for new Southern state constitutional conventions to rewrite state constitutions providing for black civic rights. Crucially, the Military Reconstruction Act permitted African American men to vote.

As Republicans began to organize black voters, white Southern Democrats recoiled at the idea of sharing political rights with black men. Democrats railed that lazy black people would destroy the country. They would vote for handouts so they could stop working.

White Southern Democrats tried to keep African Americans from political power by simply refusing to enroll voters. So Congress put the army in charge of voter registration. When both white and black Republicans registered to vote and elected moderate constitutional conventions, white Democrats organized the Ku Klux Klan as a political force to stop the change in government. Before the 1868 elections, members of the Ku Klux Klan murdered at least a thousand African Americans and their white allies. Things were particularly bad in South Carolina, where Klan members killed African American clergyman and state legislator B. F. Randolph at a train depot in broad daylight.

When the votes of black southerners helped to put Republican Ulysses S. Grant in the White House, white southern Democrats howled that black voters were taking over the country. Even though black men were a small minority of the nation’s voting population, they were in control of the government because they could swing an election.

Klan terrorism against black voters increased until Republicans in Congress recognized that it was perverting democracy. In 1871, they passed a law making political intimidation a federal offense, a distinction that enabled Grant to shut down the Ku Klux Klan by imposing martial law in nine South Carolina counties and by having federal courts, rather than local courts, try the 1000 men federal officers rounded up (only 36 were convicted). For the next twenty years, white southerners controlled black political voices by finding ways either to work with black voters or to intimidate them into silence. It was imperative to purge black voters from the system, they insisted, for black Americans only wanted social welfare legislation that would enable them to live without working. Those programs would bleed tax dollars from hardworking white men. Black voters were thus “corrupting” the American government and destroying America itself.

In 1889, a new Republican administration threatened to revive the federal defense of black voting. A new generation of white Democrats combined with increasing numbers of middle-class women working outside the home to turn this political fear into the specter of the rape of white women by black men. Opponents of black political rights explained that in exchange for their votes, political leaders would give government jobs to black men. This would give them the power of patronage, for in the nineteenth century, local positions depended on the goodwill of local politicians. While men gained political favor by promising their votes, women had no votes to trade for a job. So when black men became, for example, school principals, they could force innocent white girls to have sex with them in exchange for jobs as teachers. This social construction of a political fear very quickly turned to the idea that black political power meant widespread rape.

When American judges proved reluctant to convict all black prisoners accused of rape, white mobs dismissed the government as either corrupt or ineffectual and took over the job themselves. By the early twentieth century, white citizens had made the lynching of black men a civic duty.  While the Ku Klux Klan had operated in secret, the vigilantes of the early twentieth century took photographs of themselves with victims. For these citizen-terrorists, only by purging the government of black voices could the nation be made safe.

When Roof said: “I have to do it. You rape our women and you’re taking over our country. And you have to go,” and then made himself judge and jury, he was echoing both a fear and a crazed solution that grew out of the Civil War, when white Southern men had to face the reality that they were going to have to share control the government. That fact inspired terror—and terrorism—among white men in the late nineteenth century. It did so in the 1960s, when, once again, white Americans tried to silence black political voices with terrorism.

Today, Fox News, talk radio hosts, and Movement Conservative politicians have stoked in their followers that same fear of losing control of the government with constant references to freeloading black voters and the “47 percent… who believe the government has a responsibility to care for them, who believe that they are entitled to health care, to food, to housing, to you-name-it.” As in the past, the fear of sharing political power with African American voters who, according to right-wing media, are lazy criminals, has led to horrific violence. After a hundred and fifty years, this pattern should come as no surprise.