It's not TV, it's HB-bro: Welcome to the quasi-hellscape of HBO's brooding, bumbling, baller summer

A look at the dopey train wreck "The Brink," Dwayne Johnson's "Ballers" and the man-feels of "True Detective" 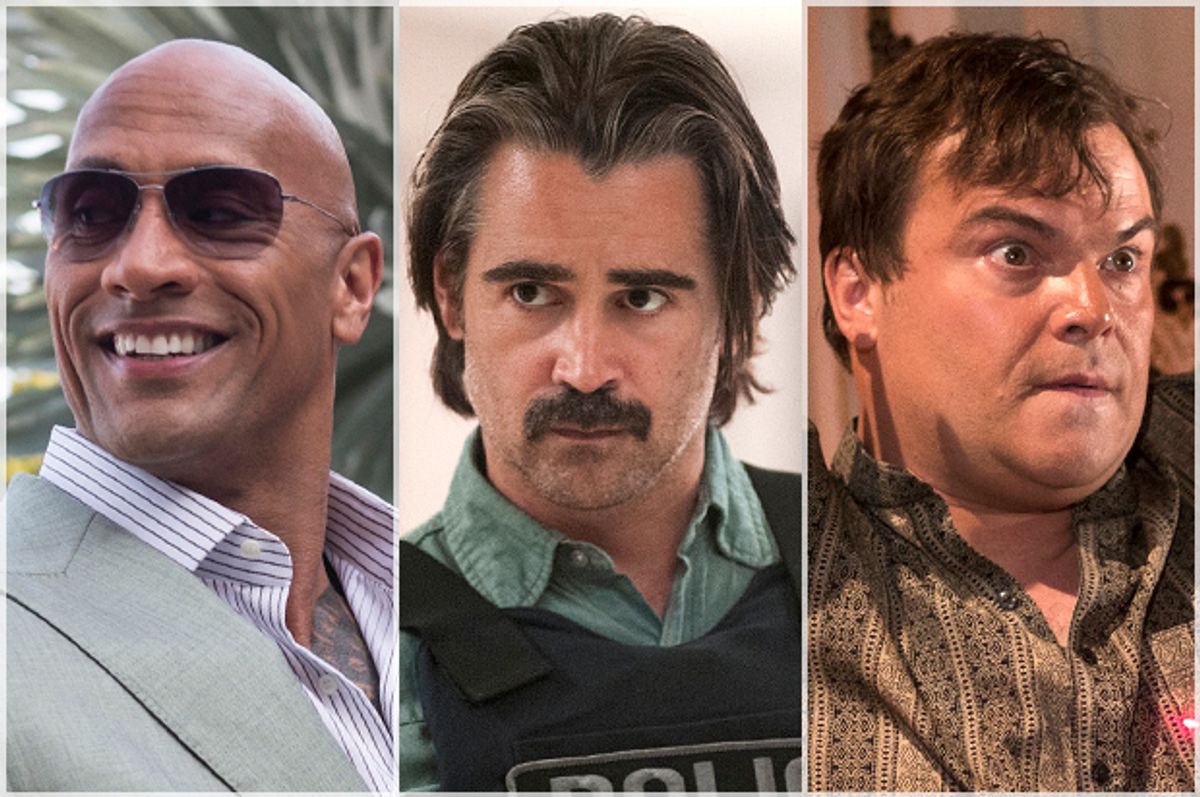 “The Brink,” HBO’s new half-hour show premiering Sunday night, goes tits-up in the first three minutes. Tits-up in that it fails, yes, but also, it fails because there are tits. A few male characters engage in fully clothed conversation. Cut to: A woman in stripper heels and fishnet garters, shoving her breasts into Tim Robbins’ face. “Ballers,” HBO’s other debut of the night, also goes tits-up in the first three minutes, although technically, it’s a little less tits, and a little more ass. (The tits come later.) “True Detective”—the fan-favorite anthology series returning for a new story and a new season on Sunday night—takes quite a bit longer to find the naked female flesh. But not much longer than the middle of the first episode, when one of the characters stumbles into a house full of scantily clad sex workers.

Welcome to this summer’s programming slate on HBO, or as I’m enjoying calling it, HB-Bro. The quality of the three shows airing from June to August varies wildly, but one thing is the same: This is a summer of man-feels. At best, the shows use their male characters’ obsession with mothers and whores and paternity and providing for their families in a way that makes an attempt to analyze the basic contradictions of masculinity as a social construct. At worst, the man-feels are simple, unvarnished pandering to male audiences—at the expense of not just the show’s female characters, but in a larger sense, women, in general. Because, definitively, a summer of the self-absorbed bro is also the summer of the nameless, tits-out slut (there are four in the first 11 minutes of “Ballers”) and the summer of the shrill, named, unsexed wife/mother/sister/assistant (there are three in the first episode of “The Brink”). The continuum of dude has little to no space for real women.

Of the three, “The Brink,” starring Tim Robbins and Jack Black, is inarguably the worst. It’s a global security comedy in the style of Judd Apatow, where a few well-meaning but largely incompetent guys stumble into situations with increasingly higher stakes while in the pursuit of girls, drugs and takeout Thai. It’s screechingly awful, and especially after the incandescent latest season of “Veep,” feels like a sad and poor attempt at imitation. The bro-tropes are almost off the charts: In addition to the naked and the shrill, there’s the withholding ex-wife, the friend’s sister who is super hot and super off-limits, and the somewhat schlubby lead who is not quite as attractive as he’d like to be but is firmly convinced he deserves hot chicks all the same. There’s an element of the show that believes it is weaving dark satire, offering grim perspective on the fact that the world’s nuclear weaponry is really controlled by this clutch of dithering idiots. But mostly the show wants to dick around, both literally and figuratively.

“Ballers,” which will premiere directly after “True Detective,” is a little harder to parse. It draws most from HBO’s ür-bro comedy, “Entourage”—the story, about ex-football players trying to get their lives on track, is saturated with more ostentatious kinds of debauchery. Bottle service in exclusive clubs; Ferraris crashed during a fight; cocaine and gold chains, when applicable. But it’s a little more thoughtful and disaffected, if not toward any clear end. The star of the show is Dwayne “The Rock” Johnson, who has already proven his acting mettle in the “Fast and Furious” franchise. And really, Johnson himself is the best part of “Ballers,” a charismatic, mostly responsive force that is our window to the precarious world of retirement from football. His perspective on the life of the partying ball player is one of nostalgia. But in the absence of forward momentum, the camera turns to looking for shock value anywhere it can. That means tits. In the pilot, “Ballers” pulls an “Entourage” classic move by having a character answer the phone while fucking a naked woman. I can’t remember what the phone call is about. It may not be about anything. It exists just to show the man fucking the woman—and being so dismissive of her charms, or her utility, or her pleasure, that he’ll stop to answer the phone mid-thrust.

Of these three shows—and maybe second to only “Game of Thrones” on HBO’s slate—“True Detective” is the one most subject to scrutiny for its female characters. It’s also the one succeeding most at deconstructing its inner bro. Last year, Emily Nussbaum at the New Yorker wrote very critically about the show’s “shallow deep-talk,” and though I didn’t agree with her entirely, the second season is responding to critique, at times, by cheekily doubling down. The show’s nods toward angsty male feelings are so predictable they’re almost farcical: The first scene is about how a man’s wife being raped affects the man; one character says to another, entirely seriously, “a good woman mitigates our baser tendencies”; and the theme song for the second season, Leonard Cohen’s “Nevermind,” includes the lyrics “I had a name / but never mind … I live the life / I left behind,” evoking some faux-western, faux-historical idea of Real Manhood that is as self-absorbedly vague as it is romantic. A man even contorts his face into wistful faraway angst as a woman eagerly draws his crotch closer to give him a blow job. (I laughed.)

The takeaway seems to be that a female critic (shrill, perhaps?) can’t possibly stop “True Detective” from rolling the way it wants to roll; even the addition of Rachel McAdams as one of the season’s four leads (cop Ani Bezzerides) doesn’t inspire confidence. As HitFix’s Alan Sepinwall wrote: “That [showrunner Nic Pizzolatto] deliberately makes Bezzerides someone who has shed as much of her femininity as possible to survive in a very male, violent world is itself a familiar and well-honored piece of police fiction (see also Kima on "The Wire"), but it also plays as an easy way for Pizzolatto to incorporate a woman into his usual fascination with masculinity.”

Still, with her steely-eyed sidelong looks and her ratty, bleach-highlighted hair, she’s there. She takes up space. Even when naked, she has a name. Even when shrill, she is too textured to be reduced to that. Maybe Pizzolatto can only write women who have molded themselves to conform to not masculinity’s standards for women, but masculinity itself, the thing behind the bro, that makes the bro tick. That might be a more damning critique of this male self-absorption than anything else in the whole show, and it might not be intentional, either. But as a non-bro, non-male viewer of television, Ani is all I have left to pin my hopes on—the final girl of a horror film, in a hellscape of bros.