“No one will ever have sex with me again”: Why I stayed in the closet about my HIV

I was a proud gay man, but I hid a terrible shame. I came out slowly until I could do the unthinkable: Tell my dad 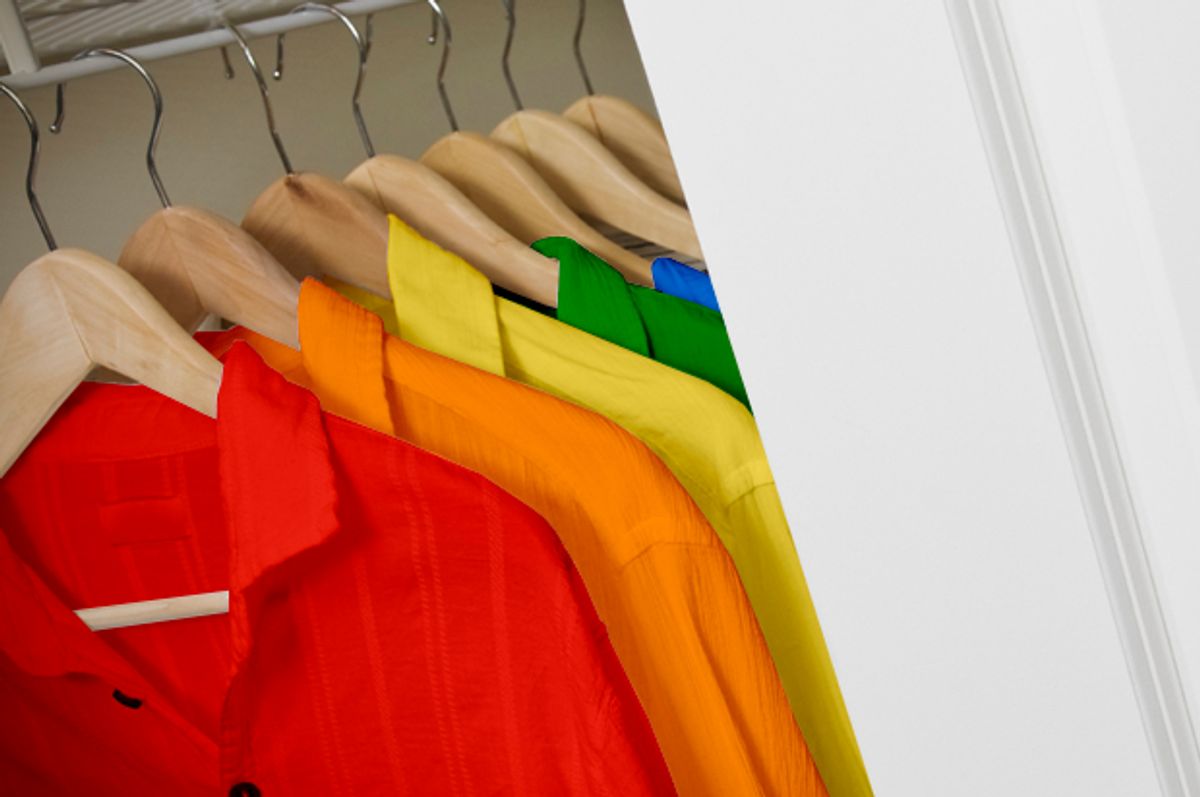 The first person I told about my HIV status was a complete stranger. Despite that initial confession, I spent the next years mostly in the HIV closet, like a bird in a cuckoo clock that only comes out every third hour.

I met the stranger at the bar in New York, where I live. It was a scant 30 minutes after my doctor had delivered my test results over the phone: “The good news is you don’t have gonorrhea. The bad news is you’re HIV positive. But these days it’s a manageable condition.” That was 2002 and I was 34. I came of age sexually in the mid-1980s, when AIDS was a deadly epidemic and safe sex was protocol for gay men. I had a domineering and fiercely protective mother, Mama Jean, who warned me that “a moment’s pleasure isn’t worth a lifetime of regret.”

Feeling as if I’d been hit by a two-by-four, I did what I did best in times of crisis: I headed to a bar near my apartment in New York. I felt someone watching me as I downed my second martini. My face must have looked like a Picasso, all the features in a tortured jumble. The stranger asked me what was the matter, and I told him. Through sobs that would put Lucille Ball to shame, I melodramatically cried, “And the worst part: No one will ever have sex...

Afterward, drunk and shell-shocked, I went home and waited for Michael, my longtime boyfriend and partner. (Like many gay male couples, we have an open relationship.) As soon as he saw my Picasso face he asked, “What’s wrong?” My lips curled inside my mouth as the tears started to flow again. He maintained his unflappable poker face. “What is it?”

“I had an HIV test. I’m positive.” The dam broke again.

“Oh no.” His face cracked – a hairline fracture – but it cracked.

I guttural cried as he held me and caressed my head. Michael, who remains negative, has stood by my side ever since.

A week later I told Mr. Parker, my best friend since college. I told him at Marie’s Crisis piano bar, the site of many heart-to-hearts for us. We got stinking drunk and belted show tunes – “What I Did for Love,” “Don’t Cry for Me Argentina,” “Everything’s Coming Up Roses.” The songs felt painfully prescient or woefully ironic. I made him promise not to tell anyone else. “Of course,” he said. “There’d be some clucking.” The implication was that friends would judge me for my promiscuity. I silently promised myself to never tell my parents.

After that I kept the news in the figurative bottle for the next four years until my problems with the literal bottle forced me into rehab and a step farther out of the HIV closet.

At rehab, everyone was required to testify before the group their 10 consequences of drinking. I rattled mine off in ascending order of importance: biting my assistant on the neck at a party; shouting “I piss on my inner child!” in a crowded restaurant; getting rolled by handsome strangers; losing my job; attempting suicide. When I got to No. 1 on the list, I needed the drum roll from “The Late Show With David Letterman.” “And No. 1 of the Top Ten Consequences of Jamie’s Drinking … Becoming HIV-positive!”

The shame turned to fear. Am I crazy? I thought. It’s one thing to tell a roomful of other alcoholics the exploits of my drinking since many of these strangers had done the same things or worse. But why tell them that I’m positive? They might judge me.

I shut up about HIV for another six years. I told people with whom I hooked up, but even then I thought, I’m telling a complete stranger what I won’t tell my mother. But then again the first person I told was a complete stranger. HIV makes strange bedfellows.

When friends would mention they were positive as casually as I might say, “I’m a Capricorn. I’m an alcoholic. I’m a Joan Crawford nut,” I felt like a fraud and a coward, a liar by omission. When other recovering alcoholics mentioned their HIV status while sharing at a sober meeting, I never raised my hand to say that I identified. I remained silent, sitting not in judgment of the person who shared, but in harsh judgment of myself.

Two years sober and a year after Mama Jean died, I started writing my way out of the closet. I joined an intimate writing workshop where I felt safe to lay the foundation for a memoir. I wrote about Mama Jean. I wrote about my alcoholism. I wrote about my suicide attempt. The act of writing about them brought acceptance until I was ready to go public about these aspects of my life. The last thing I wrote about was my HIV status, but I was undecided about sharing that semi-secret with the world.

Mama Jean went to her grave without knowing. I thought the news would kill her and I couldn’t bear to hear her say, “I told you so.” I regret my decision. It robbed us both of our fundamental roles: me admitting I needed her and she loving me unconditionally.

As I debated whether or not to disclose my status in the memoir, I knew it was time to belly up to the bar and tell my father. All the come-to-Jesus talks had been with Mama Jean. Dad and I talked about movies, my job and the latest gossip in the small Texas town where I grew up and he still lived. Like many men, he was uncomfortable talking about the uncomfortable.

But even then I couldn’t do it until forced. A family member had accidentally found out and threatened to tell him, if I didn’t. It was time to come to Jesus.

I decided to tell him over one of our daily morning phone calls. I ran my fingers through my hair and walked around my apartment in circles for several minutes before I could hit send on the phone.

He answered. “I see on ‘Regis and Kelly’ that y’all are having some pretty weather up there. So what’s happening with—”

I cut off his small talk. My words came like an avalanche. “I never wanted to tell you this, but I need you to know since I may be writing about it in my book.” He already knew the book was about my alcoholism. “I’ll just blurt it out. I’m HIV-positive. I have been for 10 years. I never told you and Mom because I didn’t want y’all to worry.” I spoke so quickly I was almost talking over myself. I didn’t want to give either of us room to react. “And you don’t have to worry. I’ve never been sick. I take one pill a day. I don’t have any side effects. You know these days it’s a manageable disease.” I quoted my doctor whose same words were infuriating when I first heard them 10 years prior. “It’s a chronic condition like diabetes, but not even as bad as diabetes.”

There was silence on the other end of the line. And then. “But you’re OK. You’re going to be OK?”

“That’s what I’m telling you, Dad. It’s not like it was. I’ll die some day, but probably not from this. It’s just a chronic condition.”

He cleared his throat. “Yeah. Yeah. That’s what I’ve been hearing about it. That it’s not even anything big anymore. Nowadays they have some good medicine for it, don’t they?” While Mama Jean would have shrieked melodramatically and fired a barrage of questions – what, when, how, and who gave this to you? – he glossed over the virus and jumped to the good news part.

Then we moved on to the celebrities “Regis and Kelly” interviewed that morning. We both ended the call with a “Love you.” Done. A month after that call, he sent me an article from the Houston Chronicle about the progress in AIDS treatment and the different kinds of HIV meds. His Post-it note read, “Which one of these are you taking?” In one of our phone chats he told me he was going to the annual “Paint the Town Red” gala AIDS fundraiser. It was a casual mention, but it was loud enough for me to hear.

Until I told Dad I was not only in the closet, but still in denial. However, I give myself a pass for that time. We all need doses of benign denial. If we thought of every possible disaster that could visit us – another Republican president, an entire chain of gluten-free restaurants, one more “Real Housewives” spinoff – we’d never get out of bed.

Telling Dad freed me. I wasn’t going to be a liar by omission anymore. I started openly sharing about it at sober meetings. I even joined an HIV-positive sober meeting. The longer I’ve been open about my HIV status, the more people I meet who are positive. Many are in the semi-closet: haven’t told their parents, keep it from their co-workers, only tell select friends. If more positive people are open about it, the more people will see it for what it is in this country (a chronic condition) and the less HIV will be weighed down by shame and stigma.

I’m relieved that my HIV status is no longer a secret I have to manage. Not something to be pitied or celebrated. It’s simply a part of who I am.

Jamie Brickhouse is the author of the memoir “Dangerous When Wet,” recently published by St. Martin’s Press.