The racist disease we never discuss: Dylann Roof, over-policing and the real story about safety in America

People of comfort get freedom and security. People of color and the poor get neither 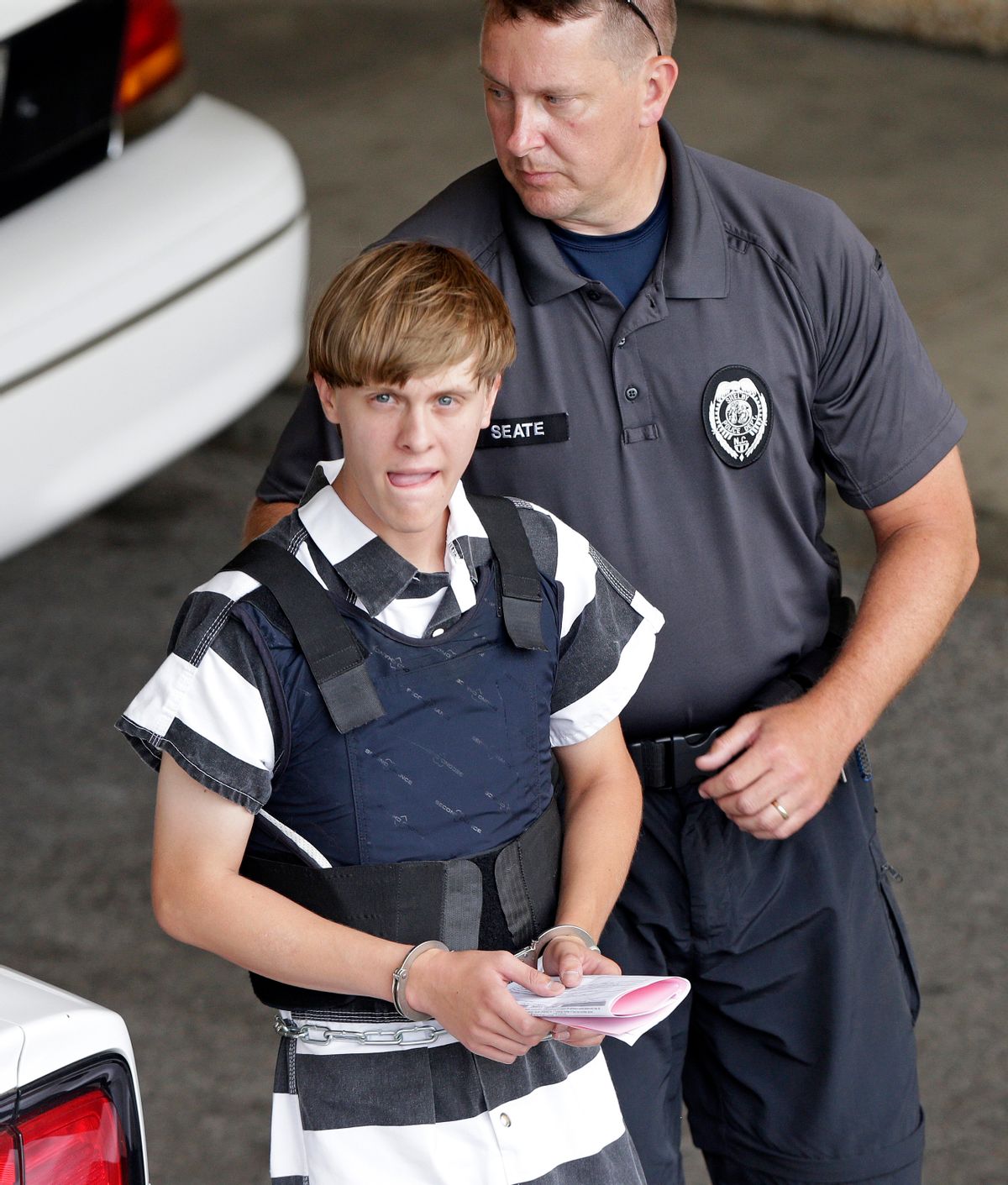 In response to Wednesday's murder of nine African Americans at Charleston’s Emanuel AME Church, President Obama said, “Innocent people were killed in part because someone who wanted to inflict harm had no trouble getting their hands on a gun.”

I’ll admit: When I first read that statement, I thought Obama was talking about the police. Unfair of me perhaps, but it’s not as if we haven’t now been through multiple rounds of high-profile killings of African Americans at the hands of the police.

Indeed, until Wednesday's murders, it seemed as if the national conversation about public safety had dramatically and fruitfully shifted. From a demand for police protection of white citizens against black crime—which dominated political discussion from the 1970s to the 1990s—to a scrutiny of the very instruments of that presumed protection. And how those instruments are harming African American citizens.

It’s tempting to seize on this moment as an opportunity to broaden that discussion beyond the racism of prisons and policing to that of society itself. In a way, that’s what Obama was trying to do by focusing on the threat posed not by the state or its instruments but by private guns in the hands of private killers like Dylann Roof.

But that may not be the wisest move, at least not yet. So long as the discussion is framed as one of protection, of safety and security, we won’t get beyond the society that produced Dylann Roof. Not only has the discourse of protection contributed to the racist practices and institutions of our overly policed and incarcerated society, but it also prevents us from seeing, much less tackling, the broader, systemic inequalities that might ultimately reduce those practices and institutions.

Since the 1960s, when law and order became the rallying cry of the country’s rightward turn, particularly around issues of racial inequality, the notion that safety and security are the primary political goods has migrated across the ideological spectrum. In 1975, the influential libertarian philosopher Robert Nozick declared that a “minimal state”—“limited to the functions of protecting all its citizens against violence, theft, and fraud, and to the enforcement of contracts”—was the only legitimate form of government.

Though critical of the minimal state, liberals have also come to believe that “the ‘first’ political question,” in the words of British philosopher Bernard Williams, is “the securing of order, protection, safety, trust, and the preconditions of cooperation. It is ‘first’ because solving it is the condition of solving, indeed posing, any others.” Meeting those requirements of order, protection, safety, and so on is what distinguishes a legitimate state from an illegitimate state.

Providing for the safety and security of citizens, in this view, may not be a political question at all. It is instead the ground upon which we ask and answer all political questions. Before we can talk about justice or equality, before we can debate the kinds of schools we want or the amount of retirement or medical care we need, we have to be safe in our bodies and secure in our rights (minimally defined). Like the faith in God that once lay at the foundation of political order, the provision of safety and security is supposed to lie beneath or beyond politics. Whether we’re black or white, rich or poor, men or women, everyone needs it, all are entitled to it, no one can dispute it.

Unless we address those deep inequalities and systemic injustices that this security consensus declares to be secondary or ancillary, however, we’re not likely to provide for that security in any kind of universal way. If anything, we’ll make some men and women less safe and less secure.

Not only are blacks systematically under-protected against crime but so are they—and the poor more generally—over-policed by the state. That’s no accident, argues Georgetown Law professor David Cole, for “our criminal justice system affirmatively depends on” inequalities of class and race. It grants broad constitutional rights—against unreasonable searches and seizures, say, or to the defense of counsel—to all citizens. But it interprets those rights in such a way that they are enjoyed by wealthier, more privileged citizens. People of comfort get freedom and security; people of color and the poor get neither. Yet pay for both. “By exploiting society’s ‘background inequality,” Cole notes, the country “sidesteps the more difficult question of how much constitutional protection we could afford if we were willing to ensure that it was enjoyed equally by all people.”

To assume that the state can provide for the safety and security of the most subjugated classes in America without addressing the fact of their subjugation is to assume away the last half-century of political experience. If anything, the discourse of safety and security has made those classes less secure, less safe: not merely from freelance killers like Dylann Roof or George Zimmerman, who claim to be acting on behalf of their own safety and that of white society, but also from the police. As Cole writes, the proliferation of criminal laws and quality-of-life regulations that are supposed to make poor and black communities safer often serve as a pretext for the most intrusive and coercive modes of policing in those communities.

The net of traffic regulations is so wide that everyone will fall within it, and as a result police officers have virtually unfettered discretion to decide whom to stop. That discretion will often be guided by the same prejudices and stereotypes that guide bus and train sweeps. And as a result, minority drivers on the nation’s highways simply do not have the same Fourth Amendment rights as whites.

Far from providing the ground upon which a more expansive vision of social policy can be built, the discourse of safety and security ensures that politics never gets off the ground at all. When we make the safety and security the sine qua non of politics—whether in the form of Nozick’s minimal state or Williams’ “Basic Legitimation Demand”—we start refracting all political problems through that lens. As the political scientist Marie Gottschalk has recently argued:

Problems such as crime, poverty, mass unemployment, and mass incarceration are no longer seen as having fundamental structural causes that can be ameliorated via policies and resources mobilized by the state. Rather, these problems are regarded as products either of fate or individual action....Anyone deemed unable or unwilling to change must be banished—either to the prison or to the prison beyond the prison represented by probation, parole, community sanctions, drug courts, and immigrant detention.

Berkeley Law Professor Jonathan Simon goes further, claiming that our entire society is now organized around the principle “governing through crime.” Social problems are treated as crimes, citizens as victims or criminals, and solutions as punishments.

Given the historic vulnerability of African Americans to the despotic power of whites, whose crimes against them so often went unpunished, it makes perfect semse that the demand for justice should sometimes assume a penal form. Not merely under slavery and Jim Crow, but also today, when the police and private citizens kill blacks with seeming impunity. Of all the things Dylan Roof said to and about his victims, that “you have to go” is by far the most chilling. Seldom have the words of a murderer been so well chosen: not only do they reveal his belief that it is his power, his right as a white man of all of 21 years, to select who is and is not a part of the body politic, who must be gotten rid of and what remains, but they also give voice to an ancient dispensation in this country, a conviction that the only solution to the Negro Question is expulsion or elimination. It was Jefferson who spoke darkly—part warning, part incantation—of “convulsions which will probably never end but in the extermination of the one or the other race” and who said of the black slave: “when freed, he must be removed from beyond the mixture.”

“Justice justice shall you seek,” says Deuteronomy. That puzzling second cry for justice reflects the conviction that a crime unpunished may be, in certain instances, more than an individual wrong. It can also disclose a systemic derangement of power—in this case, a deep and grievous loss of social standing among African Americans. But that’s the point: crimes like Dylan Roof’s or the recent spate of police murders should take us past the politics of safety and security to the abiding social domination that lies behind them.

In 1833, John C. Calhoun, a slaveholder and a racist who had been Andrew Jackson’s Vice President and was now representing South Carolina in the Senate, defended the honor of his state by claiming that “no State has been more profuse of its blood in the cause of the country.” Calhoun was referring to South Carolina’s sacrifices during the American Revolution, but his comments can be usefully read against the grain of this week’s events.

Dylann Roof shed blood for the sake of a racism that, if not quite the cause of the country, is nevertheless not exclusive to South Carolina or the South. To counter that bloodshed, we need to move beyond a politics of safety and security that would seek only to punish or prevent it. For that politics of prevention and protection, of safety and security, has indeed become the cause of the country. A cause that is all too friendly to racial inequality—and all too hostile to a politics that might overcome it.