5 toxic household products you probably use every day 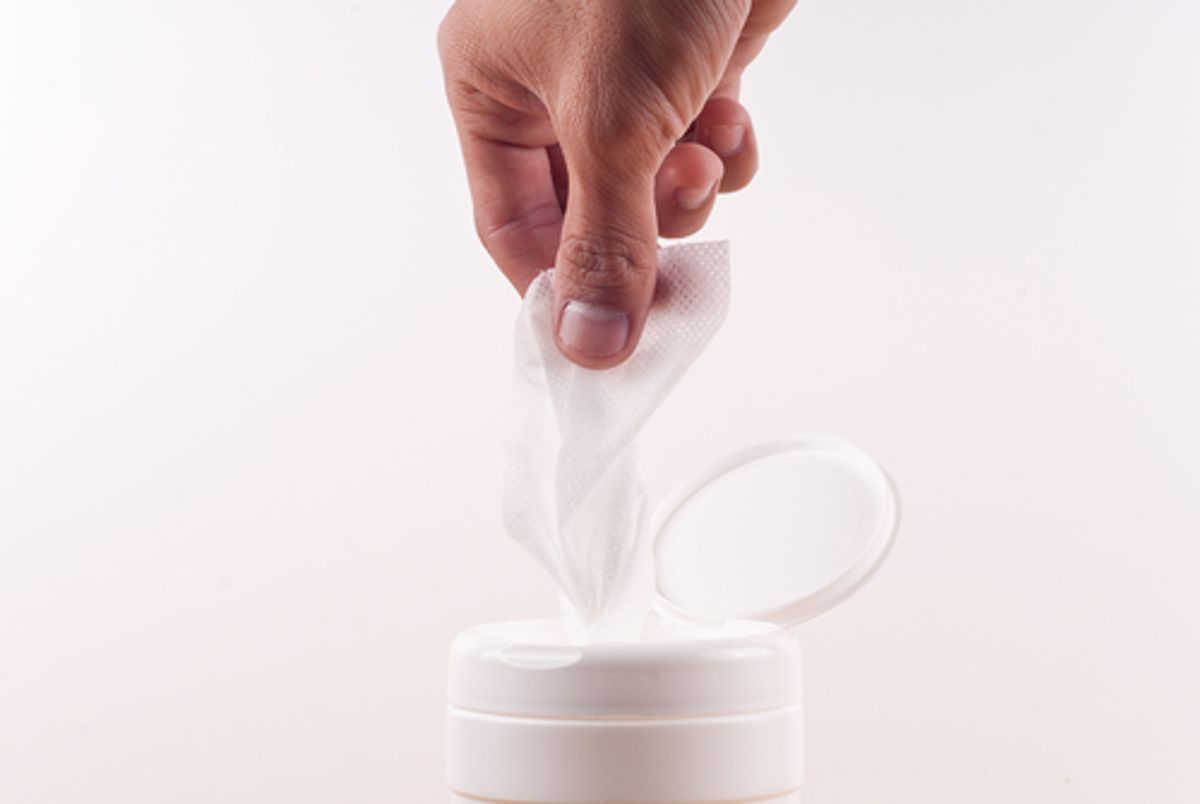 We love the convenience and the comfort they bring us, but some of our most popular consumer products can come at a heavy price to our personal health. We all try being careful, removing the known hazards from our households, yet there are many products that you likely have in your home that you probably didn't know were toxic. Here are five that might shock you:

1. Candles. Few things are better at adding atmosphere to a room than candles. But as those candles fill the room with warm light, they're also filling it up with harmful gases and sediments. And it doesn't always matter whether the candle is paraffin, vegetable oil, or beeswax based. During combustion, all candles release some soot carbon particles that can lead to respiratory problems.

But paraffin wax comes with its own problems. It starts out as a byproduct of petroleum, coal, or shale. After it's extracted from the mix, the paraffin bathes in industrial-strength bleach to give it its signature whiteness. However, this also infuses paraffin with dioxins. Another chemical, Acrolein, a compound linked to the risk of lung cancer from cigarette smoke, is added to paraffin as a solidifying agent.

While the candle industry insists that the final product is inert, studies have shown that the burning of paraffin candles releases benzene and toluene — both known carcinogens — into the atmosphere. And even if you buy a high-end candle, it doesn't make it any safer. The vast majority of candles from retailers like Bed, Bath & Beyond, Yankee Candle Store, and Crate & Barrel are mostly made from paraffin.

To add to all this, artificial dyes and synthetic fragrances are often added to candles, especially those used in aromatherapy. The recipe varies from candle to candle, but the fragrances and dyes — which are often synthetic — can contain toxic plasticizers and solvents, which should be avoided. Also, those extra ingredients also burn, which means additional soot.

If you can't live without your candles, consider those made of beeswax or vegetable oils, and with natural dyes and perfumes.

While most candles have all cotton wicks, a small percentage still have metal wire cores. Before 2003, many of those metal-cored wicks contained lead, but the Consumer Product Safety Commission banned lead in wicks that year. Today, these wire cores are mostly contain zinc. But if you're worried that you have an old candle with a lead-core wick, try this test: Take a piece of notebook paper and rub it at the top of the unburned wick. If it makes a mark resembling that of a graphite pencil, it's likely has lead. Otherwise the wick itself is likely safe.

2. Dryer Sheets. There are few scents as addictive as warm laundry pulled from the dryer, thanks to the olfactory magic of fabric-softener sheets. They're simple enough products, nothing more than thin polyester sheets coated with chemicals to soften fabric fibers and give clothes that irresistible scent.

But like with candles, the fragrance found in sheets from brands such as Downy and Bounce might pose health risks, as toxins can permeate those sheets and transfer to your clothes and skin. It is also released into the air from dryer vent emissions, which are not regulated. And because the fragrances the manufacturers use are trade secrets, have no way of really knowing exactly what they contain.

A study, published in the August 2011 issue of the journal Air Quality, Atmosphere and Health, indicates that scented laundry items can contain numerous carcinogens, including acetaldehyde and benzene.

It's probably best to ditch the dryer sheets altogether, but there are less toxic options if you insist on using them. Seventh Generation makes dryer sheets out of chlorine-free recyclable paper, instead of polyester. The company also discloses all the ingredients of their sheets, which includes a plant-derived softening agent. They contain no fragrances or masking agents.

3. Baby Wipes. Not only are baby wipes used by most parents to help keep their kids clean and comfortable, they've become a staple in many households without small children and used for many things, such as a toilet paper substitute, makeup removal, and to clean personal electronics screens.

While there is a lot of misinformation and panic posted on Internet sites about the actual ingredients of wipes, there are also some real causes for concern. Some baby wipes contain the compound Bronopol, which is also found in shampoos and other personal-care products. Bronopol, used in place of alcohol, is as an antimicrobial agent that can release low levels of formaldehyde as it breaks down. A volatile organic compound, formaldehyde can irritate the eyes and throat and cause headaches and dizziness. It has also been classified as a probable human carcinogen by the Environmental Protection Agency.

Baby wipes may also contain phthalates, a common family of household chemicals often used to soften plastics. You'll often find phthalates in many plastic household products and toys, but they're also used in some baby wipes to help soften the lotion and support the fragrance. As the manufacturers of wipes don't need to disclose all their ingredients, its difficult to pinpoint which ones contain phthalates. However, SafeMama.com suspects those that contain perfumes (notably some styles of wipes from Pampers, Huggies, Johnson's, Rite Aid, and Publix) also contain phthalates.

The chemical industry maintains that there are no studies to suggest that routine phthalate exposure presents adverse health effects, but many consumer, environmental, and medical advocates disagree. Studies over the years have raised red flags. Phthalates are known endocrine disruptors, and unlike adults, infants do not have developed endocrine systems. Even more disturbing, researchers have found phthalates in the urine of infants whose mothers used baby products containing the chemical.

The Environmental Working Group, environmental health research and advocacy organization, has safer alternatives to baby wipes and other infant-care products on its Skin Deep Cosmetics Database. They point to Water Wipes, Honest Wipes, gWipes, Kinder By Nature, and Treehouse Natural Wipes as being far less toxic. They also give high marks to VADA Wet Wipe Solution, which can be used with organic cotton wipes.

4. Markers. Permanent and dry-erase markers from manufacturers like DriMark, Sharpie, Prismacolor and Crayola are both a favorite tool and toy in many households. But that pungent aroma they might emit can be a hint to their toxicity. Markers are often rich in chemical solvents, including xylene, which is a neurotoxic aromatic hydrocarbon that can leave people feeling sick even after exposure to trace amounts. You've probably noticed how it can irritate your eyes, nose, and throat when you first remove the marker's cap. Other common complaints are headaches, breathing difficulties, dizziness and brain fog after exposure to markers, even those that are labeled as "Non-Toxic."

Xylene is a byproduct of petroleum and coal tar. Beyond its use in markers, it's used as an industrial solvent. It's also found in gasoline, rust preventatives, and some paints and varnishes. It's rapidly absorbed by the lungs and enters the blood system almost immediately after exposure.

Long term effects from low-concentrations xylene exposure aren't as clear, but it's recommended that pregnant women should avoid exposure to markers or other products that emit xylene fumes.

5. Carpets. As much as you may love that "new carpet smell" when it's first installed, that famous scent is actually the carpet off-gassing hazardous volatile organic compounds including toluene, bromine, benzene, formaldehyde, ethyl benzene, styrene, and acetone. Routine exposure to these chemicals are known to cause headaches, throat and eye irritation, allergies, confusion, and drowsiness. Synthetic carpets that contain nylon and olefin fibers are typically the worst offenders.

Regular exposure to significant levels of these toxins can pose long-term problems, including learning and memory impairment, birth defects, decreased fertility, and diseases of the liver, thyroid, ovaries, kidneys, and blood. Benzene is a well-known human carcinogen and formaldehyde is probable human carcinogen. Some new carpets also contain the moth-proofing chemical naphthalene, which is known to produce toxic reactions, especially in newborns. Also, found in some carpets is p-Dichlorobenzene, a carcinogen also known to produce fetal abnormalities when tested on animals.

But it's not just new carpets that cause a problem. While older carpets no longer off-gas these chemicals, over time dust mites and their droppings begin to permeate the nap. The droppings cause severe allergic reactions in many people, and researchers are just beginning to correlate dust mite exposure to asthma. Household dust can also have high levels of lead, as the heavy metal still permeates our soil from the days of leaded paint and gasoline. We also add toxins into our carpets when we walk on them with our shoes, tracking in contaminated dirt and pesticides from the outdoors. Also, almost any toxic substance we use at home, from paints, to bug sprays, to candle or fireplace soot, can settle into carpet fibers and stay trapped there for years.

If you're not yet inspired to get rid of your carpeting, investing in a quality HEPA vacuum cleaner can help remove a lot of the toxins without throwing them back into the air.

You can also buy carpeting certified as "Green Label Plus" by the Carpet and Rug Institute, which evaluates them for low emissions of volatile organic compounds. However, those carpets tend to be on the expensive side. But a good alternative to wall-to-wall carpeting is to use area rugs made of natural fibers such as hemp and corn husks that can be removed from a room to be washed or beaten outdoors. And you don't have to go to a specialty retailer for these rugs. Large retailers such as Wayfair, Overstock.com, Home Depot, and Staples sell both types of rugs.