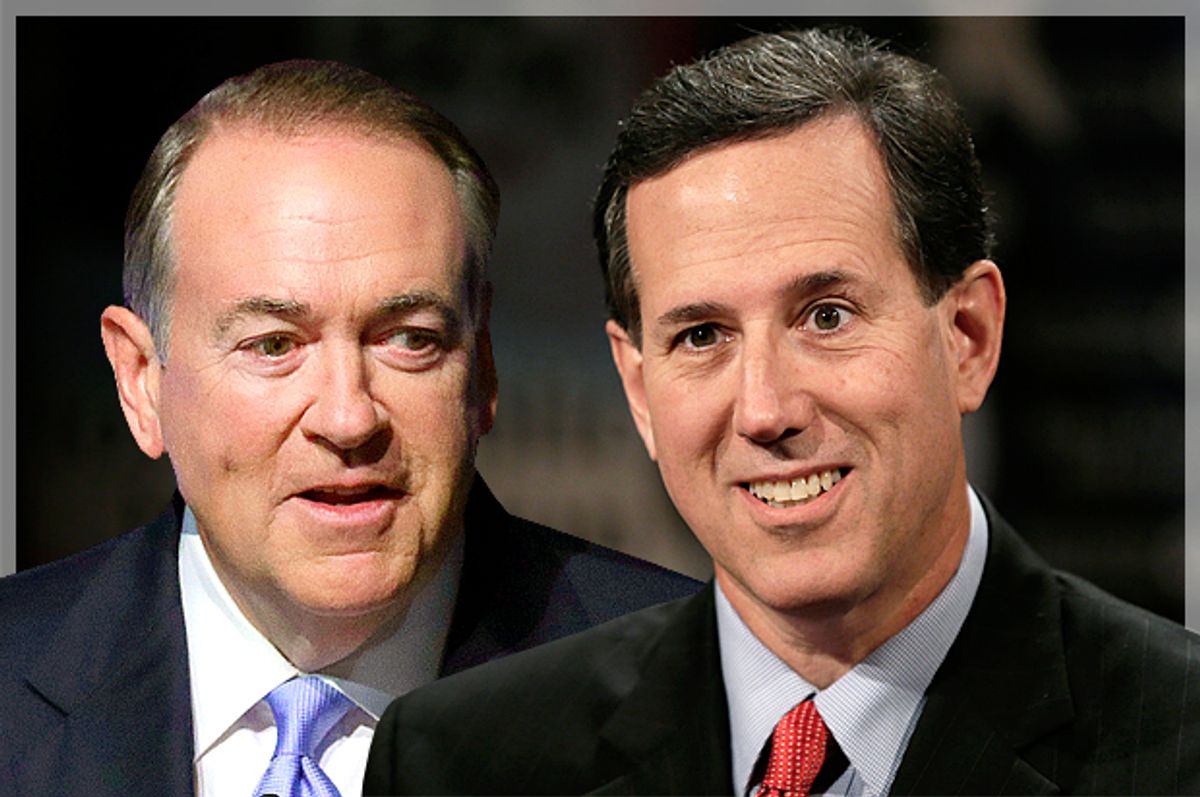 In the days since 21-year-old white supremacist Dylann Roof shot and killed nine people in a historically black church in Charleston, South Carolina, it has become abundantly clear that the handlers for the Republican presidential nominees have begged their candidates to avoid the subject of race -- in whatever form that conversation might take.

On Thursday, former Pennsylvania Senator Rick Santorum and current South Carolina Senator Lindsey Graham both claimed that Roof's primary motivation for gunning down parishioners at the Emanuel African Methodist Episcopal Church was a hatred of "religious liberty." He was, they asserted, just one of many "people out there looking for Christians to kill them."

On Friday, for Florida Governor Jeb Bush followed their lead, speaking about the events in Charleston at length without ever mentioning, for example, that Roof told police that he staged the attack in order to start a race war.

After it was revealed that the blurred out symbol on the front of Roof's car was a Confederate flag, Sen. Graham unwittingly demonstrated just how confused conservative thinking on race is at the moment, telling CNN that the flag is "part of who we are" in South Carolina, before quickly confessing that to many "it's a racist symbol." Whether he meant that cherishing "a racist symbol" is a "part of who" South Carolinians are -- or whether he simply excluded African-Americans from the royal "we" and was only referring to white people when he made is statement -- Sen. Graham's statements revealed precisely why the rest of the GOP field is so eager to avoid discussing racially charged issues like its base's love of the Confederate flag.

And that was before photographs of Dylann Roof posing with it were discovered on Saturday.

On Sunday, two presidential hopefuls tried proving that they had learned from Sen. Graham's mistakes when they were asked about the flag. On "Meet the Press," Chuck Todd asked former Arkansas Governor Mike Huckabee whether he was "comfortable displaying the Confederate flag in public."

On ABC's "This Week," Santorum told Martha Raddatz that he had no position on the issue because "I'm not a South Carolinian." Unsatisfied with that response, Raddatz pressed him, and Santorum replied by saying that "these are decisions that should be made by people."

"I don’t think the federal government or federal candidates should be making decisions on everything, and opining on everything," he added. "This is a decision that needs to be made here in South Carolina."

The only prominent Republican candidate who would take a public stand on the issue isn't even running for president in 2016 -- Mitt Romney, who tweeted the following on Saturday:

Republicans' caution on all racial issues is perhaps best summed up by -- of all people -- Ben Carson, who on Monday published an op-ed in USA Today chastising his fellow prospective nominees "who dare not call this tragedy an act of racism, a hate crime, for fear of offending a particular segment of the electorate."