How "Fox & Friends" became the most repugnant show on Fox News

In the aftermath of the Charleston tragedy, "Fox & Friends" has descended to new and uncharted levels of idiocy 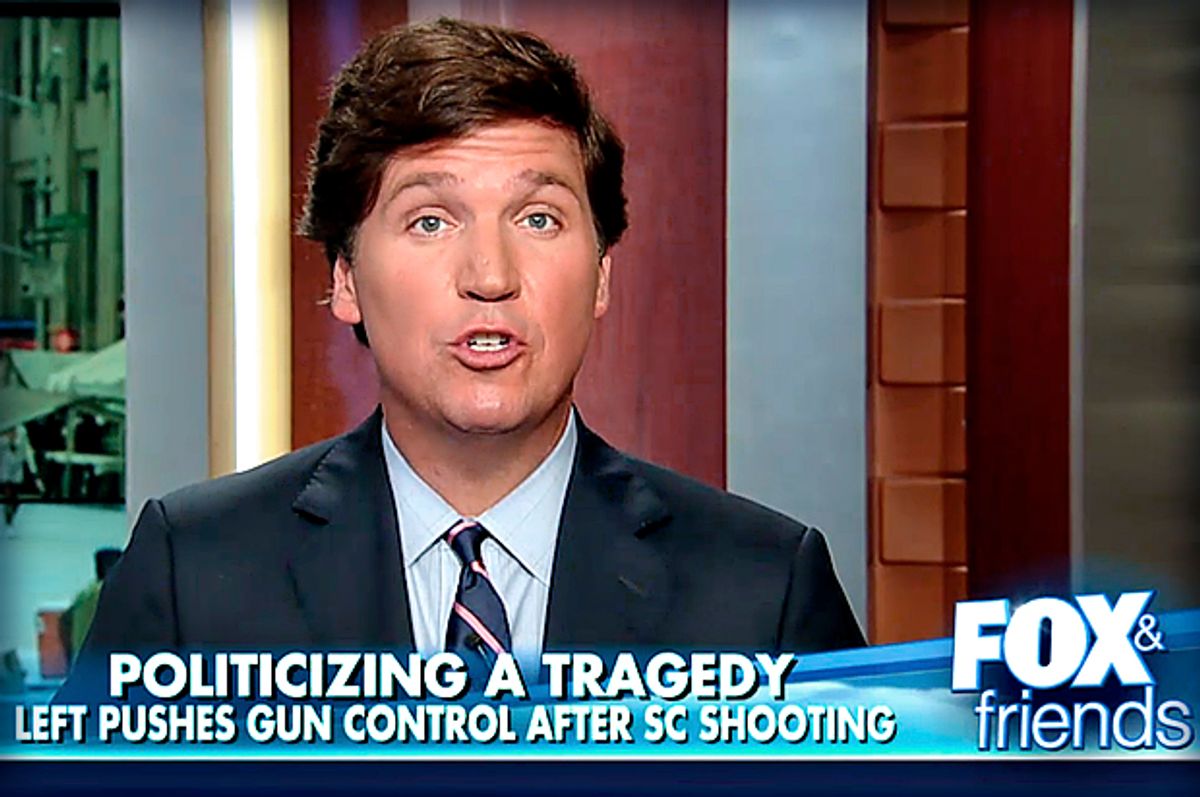 An unexpected side-effect of the heart-wrenching gun massacre in Charleston is that the coverage on "Fox & Friends" has managed to reach all new depths of hideousness, even for the typically horrendous Fox News Channel. It's a high-water mark (or low-water mark) in what appears to be a ramping up of the awfulness on that far-right morning zoo. Indeed, 'Fox & Friends" could very well be the newly crowned most vile show on that network, recently outpacing the other contenders from the rogues gallery: O'Reilly, Hannity and "The Five."

We'll circle back to this point, but first let's review a sampling of what these giggling couch tumors, Steve Doocy, Elisabeth Hasselbeck and Brian Kilmeade (and that's not even to mention Tucker Carlson on the weekend), have crapped out over the last several days covering the shootings in Charleston.

Right out of the box, Doocy, Hasselbeck and Kilmeade, along with their guest, the right-wing nutjob Pastor E.W. Jackson, declared that the massacre was part of an obvious shooting war against Christians. All this while it was being widely reported that the alleged gunman, Dylann Storm Roof, had said, "I have to do it. You rape our women and you’re taking over our country. And you have to go." Did Doocy, Jackson and the panel think Roof was referring to Christians? While it's true that Christians such as the Duggars, for example, have been up to some rather terrible things, Roof was clearly referring to black people, especially considering he killed eight of them.

Somehow, "Fox & Friends" discovered a way to stir the Charleston shooting into their broader "war on religion," which has heretofore centered around "religious freedom" laws and same-sex marriage. So, now, we're expected to believe that every time a person of faith is shot, even when the actual motive is perfectly clear, the shooting will be lumped into this Christian persecution complex.

(Incidentally, Jackson, appearing later on a far-right radio show, blamed the massacre on gays, academia, liberals and President Obama. This was the premiere go-to guest during the breaking news coverage of Charleston on "Fox & Friends.")

If that wasn't enough, Doocy wondered later in the show why the gunman was able to reload five times. According to him, it was because there weren't any good guys with guns in the church at the time. Okay, we're doing this one now. For the record, here are a few locations where "good guys with guns" happened to have been present: Columbine, Virginia Tech, Tucson; not least of all, there were numerous good guys -- with Uzi submachine guns, no less -- outside the Washington Hilton when President Reagan and James Brady were gunned down in 1981. (The Secret Service never fired a shot at John Hinckley, Jr., who was merely tackled to the ground.) But Doocy, as well as his BFFs at the National Rifle Association, agree that arming pastors and parishioners is the best option for thwarting future mass-shootings. What could possibly go wrong?

As an aside, there was one redeeming moment during the good-guys-with-guns segment, and that was only due to the unintentional comedy it provided. At one point, Brian Kilmeade tried to do some math out loud, wondering why Roof had to reload five times if he only shot nine people. Kilmeade seriously asked, "Did he just miss a lot?" In case Kilmeade happens to read this, we'll help him out: No, Brian, Roof obviously shot each victim multiple times, effectively annihilating them. Also, Brian, you shouldn't be doing math on television.

Speaking of which, on Friday's edition of Fox & Friends, Kilmeade asked out loud, "Now we have to deal with race and gun issues? No." It's a shame, isn't it? Nine African-Americans are killed by an apparently racist gunman, and poor Brian Kilmeade and his co-hosts "have to" power through the headache of talking about race and gun control. Poor, poor Kilmeade. Let's all take a moment to shed one tear for the sentient goblins on Fox & Friends.

Again, all of this occurred over the span of two shows, and there are likely other horrifying things we missed.

So, by the time Tucker Carlson suggested this weekend that if Barack Obama was serious about gun control, the Secret Service should give up its guns too, "Fox & Friends" had already descended so far into a state of repugnant incoherence that this felt almost tame.

Admittedly, it's a lot of fun to laugh at these doofuses. That said, Fox & Friends is responsible for setting the tone of Fox News Channel's broadcast each day. The message that echos out across all shows is injected like black-tar heroin by Doocy, Hasselbeck and Kilmeade -- who, by the way, could be replaced by their "Saturday Night Live" doppelgängers, and no one would notice.

One thing's for sure: there's now an effort afoot to make this the most harrowing program on that network. Just casually perusing media watchdog sites, it's easy to observe that the number of Fox & Friends articles have far outpaced some of the other usual suspects. (Is serial hate-monger Eric Bolling even on that network any more?)

Broadly speaking, the most watched cable news network is anchored by this increasingly poisonous trio of spasmodic demons who more closely resemble the Three Stooges fixing the plumbing than serious news and commentary professionals. Let that sink in.