Republicans are just this screwed: Why Mitt Romney is trying to save the party from itself

The former nominee is using whatever sway he has to prevent the party from defending, say, awful racist flags 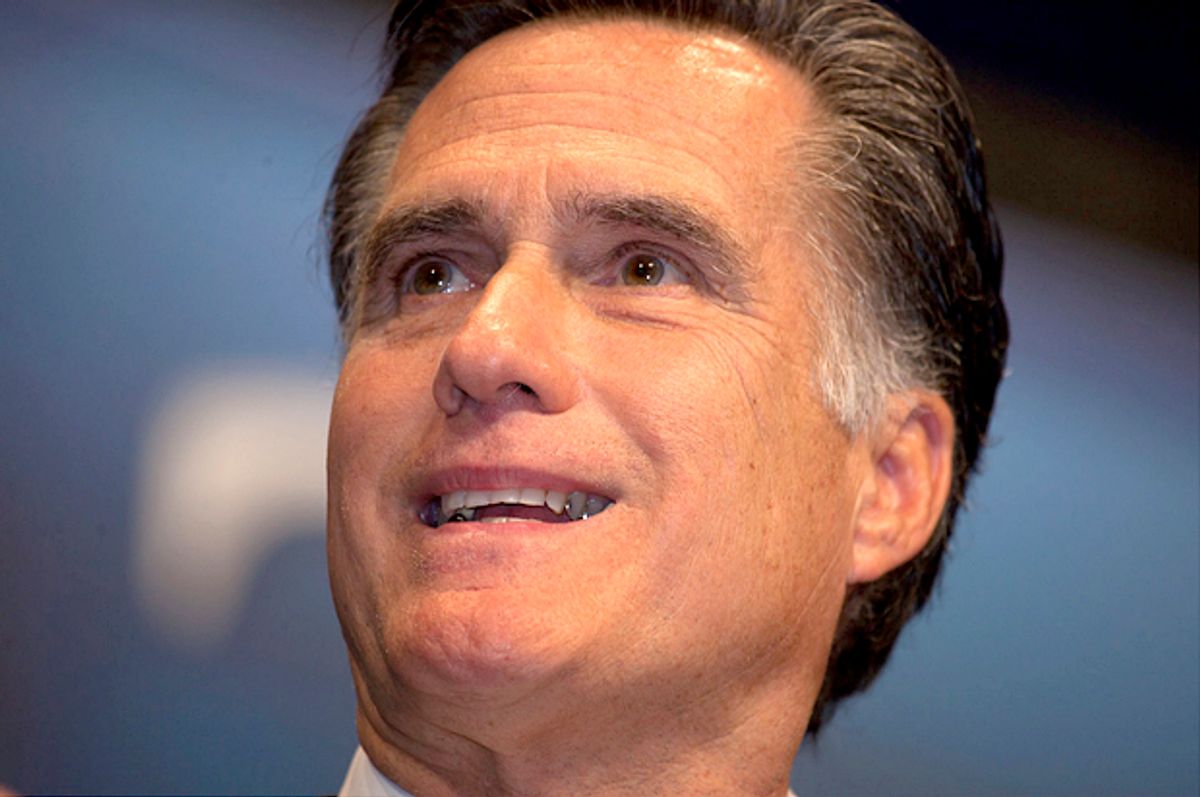 You never know what's going to be the question of the week in a field of ~15 Republican presidential candidates. Should vaccinations be mandatory? Would you have authorized the invasion of Iraq knowing what you know now? Does President Obama love America? One person makes a strangely idiotic comment and then reporters ask everyone else in the field the same question, hoping to see how they all negotiate the twin interests of winning favor with the party base and common sense.

The question this week is an old one that, for terrible reasons, has not been resolved to satisfaction by 2015: should the Confederate flag be removed from the South Carolina Capitol grounds? This... should not be a difficult decision, but it is, because lots of Southern white people absolutely love this flag, and if you take it down, you'll be hurting the feelings of their great-great-great-granpappies who died to protect slavery or whatever. As then-congressman Lindsey Graham explained it to the New York Times in 2000, when the Confederate flag battle was raging during another presidential contest, "Bubba" is a fragile creature who might not be able to get out of bed in the morning if his treasonous slavery flag is no longer waving in the winds.

''There is a guy out there named Bubba,'' said Mr. Graham. ''He grew up when public schools got integrated. He goes to work every day. There are women and African-Americans in the workplace and he's fine with that, but he thinks the whole world is against him and has rights he doesn't have. He thinks the flag is the last thing he has going for him and he's not going to take it down. I don't want to step on Bubba's feelings. There are no groups sticking up for the Bubbas of the world.''

Much to Bubba's chagrin, the debate has resurfaced in the last few days after a white supremacist went into an historic black church and murdered nine people. Maybe it is time to take down this avatar of white supremacy from the public grounds of the first state to secede from the Union?

Ehh, not so fast. It was once again Lindsey Graham, now a senator running for president who needs to win his home state to have any chance of competing for the nomination, who urged caution. He explained to CNN that the Confederate flag "is part of who we are" as South Carolinians, which isn't a very flattering depiction of South Carolinians' self-identity. He added that while "others" might see the flag as "racist," "the problems we’re having in South Carolina and around the world aren’t because of a symbol, but because of what’s in people’s hearts." Here Graham is suggesting, on the one hand, that the Confederate flag is so central to Southern identity that it must fly on public grounds, while on the other hand dismissing it as just some dumb symbol. Which is it? Does it matter, or does it not?

It was up to one figure to save the Republican Party from such an ignominious portrayal.

First of all, good on him. And surprisingly, it's not something that he's only able to say now that he's out of politics: he's maintained his position that the flag should be removed from South Carolina state grounds since at least his first run for the presidency.

Some have argued that Romney did not do Republican presidential candidates any favors here: that he's putting them on the spot when he's got nothing at stake. Is it so dastardly a move, though? Now that he's no longer running for office himself, he's well respected among Republicans. None of the candidates themselves want to go first in calling for the removal of the flag. Romney's assuming that duty himself and urging others to follow his lead once the seal has been broken. Progress is cautious -- there's still a lot of "I don't like the flag myself, but this decision is up to the glorious people of South Carolina!!!!" -- but the field is beginning to move in the proper, less-racist direction.

This is how Romney sees his role this year: to prevent the party from nominating another Mitt Romney, i.e. someone who takes such deplorable primary stances that he's damaged goods in the general election. As Politico reported during Romney's Utah summit last week, Romney aims to use his stature as a former nominee, as well as the resources he shepherds, to gently nudge the party back in the right direction whenever, say, racism begins to take hold:

Mitt Romney is working with an unlikely collaborator — Sheldon Adelson, the billionaire casino mogul who bankrolled Newt Gingrich’s 2012 campaign — in the hopes of ensuring that the GOP primary produces a mainstream conservative without any of the mayhem that marked his own race.

The two, who speak monthly, aim to convince the wealthy contributors bankrolling various candidates to work together to avoid the kind of primary election chaos that Romney believes laid the seeds for his defeat in 2012. The former Massachusetts governor is also considering endorsing a candidate to achieve his goal.

They’re unmistakable signs of Romney’s newly assertive role in the Republican Party but also of his determination to guarantee the GOP an unbloodied nominee with broad-based appeal.

He'll have his work cut out for him.