"True Detective" recap: "Everyone gets touched"

The moody crime drama returns strong with a dead body, a missing person, a gangster and three damaged detectives 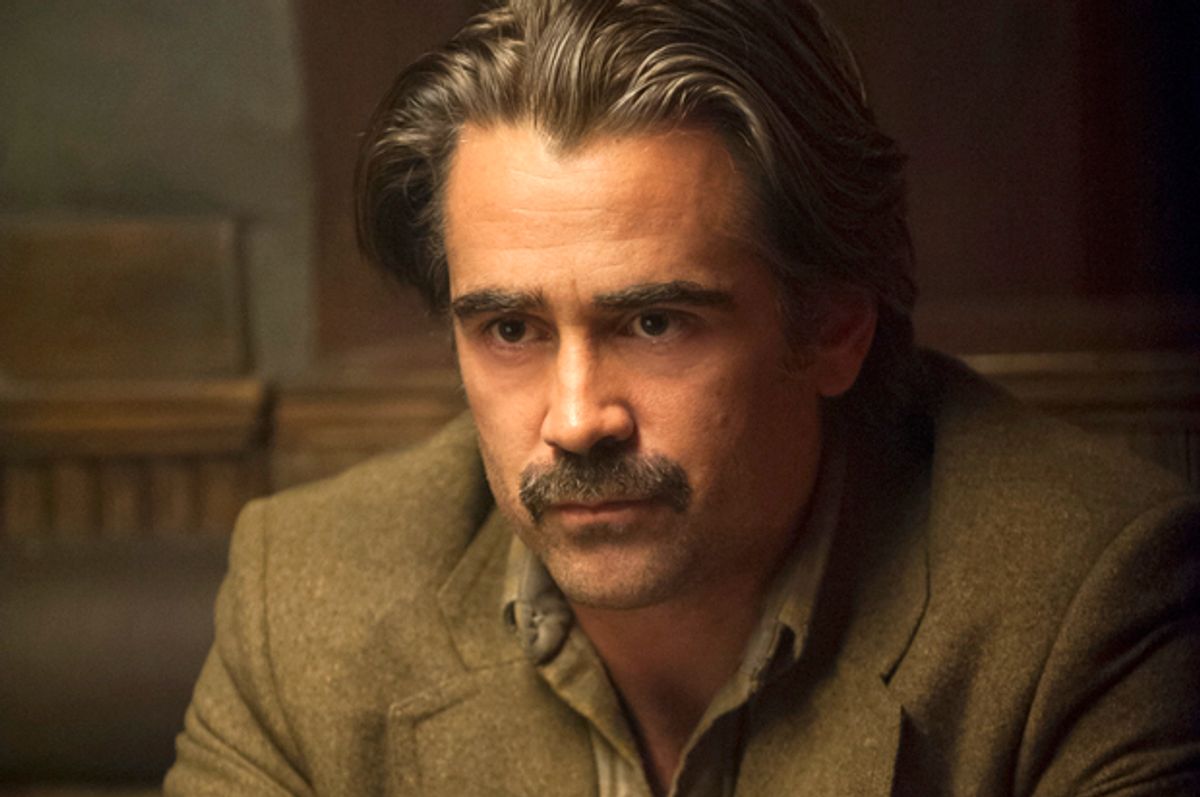 “True Detective” enters into its second season with an enormous amount to prove; a chip on its shoulder, almost, from the extraordinary amount of hype and expectation baked into season two. Season one of the show was a sleeper hit, an overnight phenomenon; season two was bound to be a disappointment to someone or other before it even made it to screen. It has not helped that the series’ showrunner, Nic Pizzolatto, has expressed prickly resentment towards the press following “True Detective”’s smash success. The entire season is permeated, at this point, with both the need to prove that the second season can be as good as the first—and also a sulky irritation that such a thing would need to be proven at all.

It comes as no surprise, then, that so much of the first episode of this season feels responsive—to Hollywood, to the show’s critics, to ridiculously high expectations. All the male characters in “The Western Book Of The Dead” struggle with different expressions of impotence—which might well compare to Pizzolatto’s own feelings of impotence, or might just be a smart-bro homage to the original smart bro, Ernest Hemingway. 15 minutes in, the episode offers up sex workers clad in the silly trappings of male fantasy—fishnets, plastic high heels, neon wigs. A few minutes later, Colin Farrell’s character Ray Velcoro walks with his partner into a missing man’s apartment, only to find it chock-full of dildos—strewn on the counters, literally, next to erotic paintings of women and a view of a naked woman bathing in a vat of milk. It’s exaggerated to the point of absurdity—an elaborate “fuck you” to viewers of the show who found “True Detective”’s first season a little to self-consciously obsessed with sex, a little too indulgent of male feelings. Lest we have any doubts about Pizzolatto’s feelings towards the press, drunk and unstable Ray puts on a ski mask and beats the shit out of a senior staff writer that is too critical of a major business deal headed by Vince Vaughn’s Frank Semyon, a criminal boss trying to go legitimate. That’s a stance reflected in how all of our characters respond to criticism in just the first hour: Rachel McAdams’ tough cop Ani barely restrains murderous rage towards her “prick” father; Taylor Kitsch’s Paul Woodrugh responds to a formal reprimand by asking sharp questions about the hierarchy above him (when not getting dangerously self-destructive); and Ray, in the first few minutes, says with unearned swagger to a family lawyer: “I welcome judgment.” There are parts of this show that could be subtle, but this isn’t one of them.

So perhaps it’s an indication of the power of admittedly toxic expressions of masculinity that this first episode back, while confusing, is reliably captivating; the landscape of bombed-out industrial suburbia is a concrete playground of corruption, the betrayal of the promise of the American frontier. “True Detective”’s roots are in pulp, in noir; each scene in “The Western Book Of The Dead” would fit into a grim, darkly inked comic book, complete with men in suits, mostly naked women, and the graven lines on the faces of the protagonists, who we are unsubtly informed have Seen Too Much. And this has always been “True Detective”’s strength: The ability to make romance out of the mundane stuff of everyday life, the power to enact man’s struggle for meaning onto the landscape of suburbia.

I say “man’s,” because let’s be real, the addition of McAdams to the cast, as fantastic as she is, does not change the fact that “True Detective” is a story about men. That in itself doesn’t make the story less worthwhile, in my opinion—the commonly accepted myth of masculinity is the most corrosive substance on the planet; any deconstructions are more than welcome, in my book. But look: This is an episode where Paul experiences angst about a blow job, where Ray’s wife’s rape has so utterly destroyed Ray himself that he is reduced to beating up his son’s bullies’ fathers with brass knuckles. Ani’s gained admission to the protagonists’ inner circle by acting, for whatever reason, entirely like how men are expected to—she doesn’t talk about sex, she eschews intimacy, she wears pants, she carries two guns. A good woman, Frank says to Ray, “mitigates our baser tendencies.” What a good woman is, presumably, is not Ani.

The bigger question is whether or not “True Detective,” in its second season, with an unexpected year of success under its belt, can truly skewer what it means to be male—and offer some kind of way out, too, for its tortured characters. In the first season, we saw Marty and Rust alienate everyone and everything—and nearly die—in order to serve their higher purpose; by the end, they concluded that they might not be good men, but they could be the bad men that understood evil, and how it lived in themselves, and use that to take down other bad men. Maybe that would help a little bit, in their own way. Not a happy conclusion, but it’s one that resonated.

So as self-parodying as elements of “The Western Book Of The Dead” are, I saw them as self-aware signaling; this is where the story must start. It’s most prominent in Farrell’s Ray, a character that is on the brink of total collapse, a booze-soaked dervish of destruction, reduced entirely to the id of bloodying those in his way or paying them off with stacks of cash. Through Farrell, Ray has a certain disastrous charm, making him a reeling juggernaut of destruction that you want to watch figure his life out—or die; whatever would end this awful downward cycle. Ani, similarly, is so invested in her hard-ass personality that as convincingly as McAdams sells it, I found myself waiting for the inevitable cracks in her defenses; as useful as armor is, everyone deserves a chance to take it off.

And the real hero of the hour is Vince Vaughn, who turns in a performance I forgot he could deliver—the surprisingly sensitive crime lord who loves and respects his wife, a man who can manifest both vulnerability and ruthlessness. Just as Rust Cohle offered Matthew McConaughey a role few of us had expected of him, Frank Semyon delivers Vaughn in fascinating, deadly form. He seems to sink into the atmosphere of “True Detective”’s second season with an effortlessness the other three characters don’t quite yet exhibit, perhaps because he’s meant to—Frank is the one steeped in corruption, after all.

But most of all, what I loved about “The Western Book Of The Dead” is the moody build-up to the final few minutes, which even without season one’s celebrated director Cary Fukunaga (reportedly, Fukunaga and Pizzolatto clashed on set, leading to Fukunaga’s departure from the show) is still beautifully shot and in its way, indelible. (Fukunaga is replaced on this episode by Justin Lin, who is hardly an amateur.) The big reveal of the episode is that Ray and Frank are working together now, as they did before, and their mingled cigarette smoke is the only source of brightness at their dark dive-bar booth. The camera plays with our notion of space, so that it took me a few moments to realize they’re not just in the same bar, but sitting at the same table—not just accidentally together, but really together.  And that scene, with its haunting folk guitarist/singer (which, hey, “Mad Men” did it first, but I’m a sucker for that kind of thing) and the slow, inevitable build to what we know will finally happen—the meeting of our three police protagonists, from three different jurisdictions, and their suspicious appraisals of each other, casting long glares across a darkened highway. It’s what I expected from the episode, which yes, does cheapen it a tiny bit. But it’s still a welcome thrill, a little like coming home.

I’m interested to see Pizzolatto turn his lens to California, and I’m interested, too, to see him write about two presumably Italian-American characters—Ani Bezzerides and Ray Velcoro are presumably somewhat Italian, as is Pizzolatto himself. There is something fitting about this season beginning on the summer solstice; it’s a time for hot, lazy reflection, and staring up at the stars.