Fox News must be stopped: Why its Charleston coverage has finally gone too far

Ridicule isn't enough. We need to call out the lies and rebut them accurately & loudly. This is more than a "story" 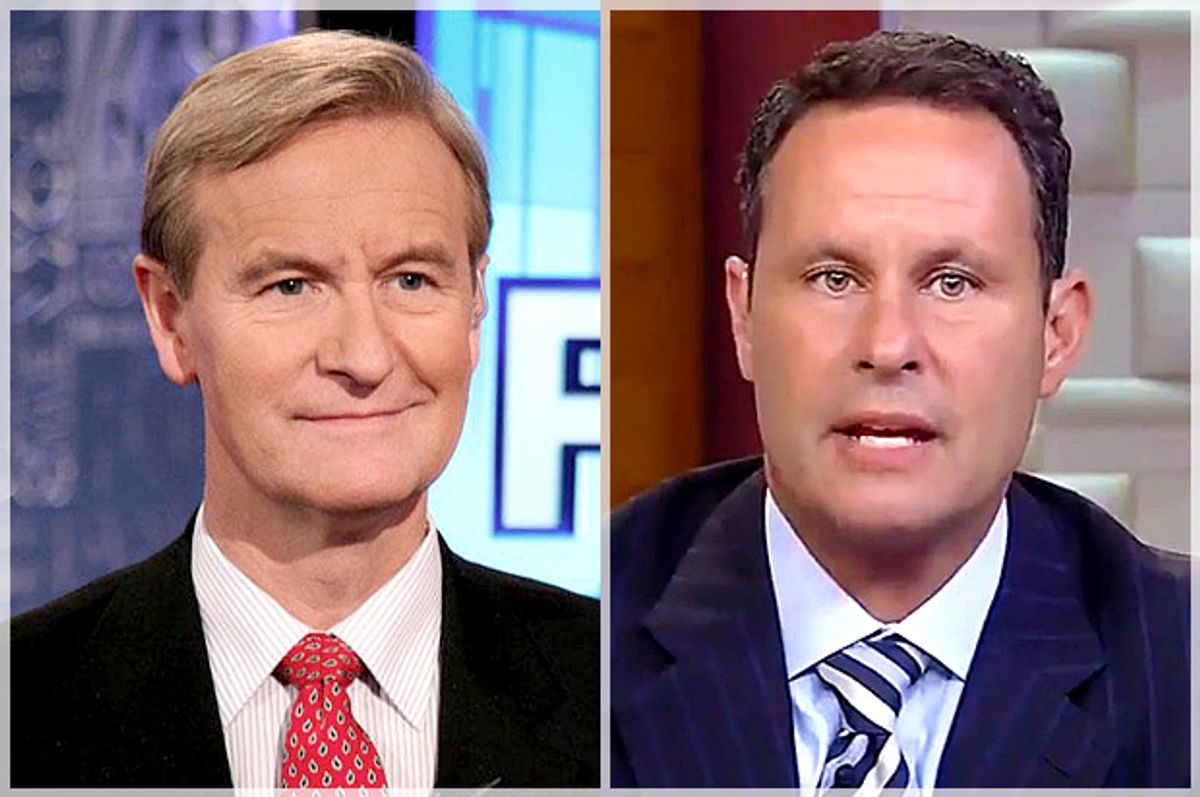 There has been some speculation as to whether Dylann Roof is insane, or was so at the time of the shooting at the Emanuel African Methodist Episcopal Church in Charleston, South Carolina. Certainly the amount of premeditation that went into the mass murder he planned and perpetrated should make us wary about accepting too readily the assertion that he was crazy. But while we might wonder about Roof, there is no doubt at all that for its commentary on this horrific, hate-filled crime Fox News should be indicted in the court of public opinion for its role in this and other racist acts.  The network surely was conscious of what it was doing in aiding and abetting; it surely planned to furnish Roof with an alibi regarding the exact nature of his heinous crime.

I don’t care to debate whether the Fox commentators are sincere when they voice their corrosive ideas, or if it is simply a matter of a herd mentality that kicks in when more than one of them is in a room and the klieg lights are on, but there is no denying that they and Fox make money off this. This is a classic example of sensationalistic yellow journalism. And it’s worse, because it is also ideologically driven and it perpetuates a racist ideology.

How else could Steve Doocy opine on Fox News that it was “extraordinary” that the Charleston church shooting was called a hate crime? How else can Fox wonder if it had a racial element to it when Roof is on record as saying during the shooting that he wanted to kill black people because they are “taking over”?

This combination of warped mentality, groupthink and profiting off tragedy is the hallmark of Fox, but the poison of its commentators is effective because is taps into a history of white supremacist belief that appears widely and perniciously in many guises.

Fox provides a support system for hatred, and in this instance its collaborators include people like Rick Santorum, who in a craven act of opportunism turns a racist attack into an attack on, what else, himself and his political base, the religious right; Lindsey Graham, who argues the same and defends flying the Confederate flag as a sign of Southern pride and defiance; Rick Perry, who called the shooting an “accident” (OK, he has now corrected that — he says he meant “incident,” but what an interesting Freudian slip); and those in the NRA who make this about their cause, the right to own arms. Apparently it’s about everything except race, and, more specifically, white supremacy. I would call this mutual support system that radiates out from the cesspool of Fox News the “Larger Fox Network.”

This network has been particularly active ever since the election of Barack Obama to the presidency, and has adopted the rhetoric and vocabulary, and reasoning, of age-old white supremacy.  As David Remnick points out,

the words attributed to the shooter are both a throwback and thoroughly contemporary: one recognizes the rhetoric of extreme reaction and racism heard so often in the era of Barack Obama. His language echoed the barely veiled epithets hurled at Obama in the 2008 and 2012 campaigns (“We want our country back!”) and the raw sewage that spewed onto Obama’s Twitter feed (@POTUS) the moment he cheerfully signed on last month. “We still hang for treason don’t we?” one @jeffgully49, who also posted an image of the President in a noose, wrote.

South Carolina has undergone enormous changes in the decades since Jim Crow, but it is hard to ignore the setting of this rampage, the atmosphere. Seven years ago, as Obama was campaigning in South Carolina, the Times columnist Bob Herbert visited the state, encountering the Confederate flag flying on the grounds of the State Capitol building and, nearby, a statue of Benjamin (Pitchfork Ben) Tillman, a Reconstruction-era governor and senator, who defended white supremacy and the lynching of African-Americans, saying, “We disenfranchised as many as we could.”

Now, in the face of all this, it is heartening to see so much strong, smart, righteous commentary pouring out, in both the mainstream media and from other sources.  My concern, however, it that after this “story cycle” wanes, what will be the lasting effect? Make no mistake, the Larger Fox Network will still be intact, still spewing its garbage and hatred. We need to do something about that.

As one part of the response I would look to our schools — they are one of our last institutions wherein racism can be exposed in all its forms, critiqued, and fought against.  And those truly sincere about their abhorrence of what happened at Charleston should be prepared to look deep into their own souls, and behaviors.

By many accounts, this is not going to be easy.  Recently Lee Bebout, a professor at Arizona State University, was viciously attacked by white supremacist groups for offering a course titled “US Race Theory and the Problem with Whiteness,” and again Fox played a major role in fanning the flames of racist reaction:

The class, which began on Jan. 12, received national attention Jan. 23 when Fox News correspondent Elisabeth Hasselbeck called the course "quite unfair, and wrong and pointed" on Fox & Friends.

Lauren Clark, an ASU junior who is not in the class or in the English program, said on the show that the class "suggests an entire race is the problem."

The segment ignited a media frenzy, and Bebout began receiving hate mail the day it aired, according to a police report.

Over the next two months, Bebout received at least 70 hostile e-mails from opponents of the class, according to records provided by ASU.

As a young student not in the class or even in the English program (and that might explain a lot) Ms. Clark should probably not be faulted too much for reading past the actual title of the course -- it was “whiteness," not “whites” — but the fact that the supposed adults at Fox could not manage to think twice, or simply think, is telling. Again, it was more to their interest to drum up hatred based on a false charge, and sit back as the situation got uglier and more violent.

On Jan. 29, someone distributed fliers on the driveways of Bebout's and others' homes in his neighborhood with "Anti-White" printed over his face and reading "Arizona State University is Anti-White," according to Tempe police. The act of putting the flier on Bebout's driveway constituted misdemeanor harassment, the report said.

The fliers were labeled "National Youth Front." NYF is a "youth organization dedicated to the preservation of all White people," according to the website for the group, which has a Phoenix chapter of unknown size.

The group is characterized as a "newly formed youth wing of the White nationalist American Freedom Party" by the Southern Poverty Law Center, an Alabama-based civil-rights organization…

In February, commenters on white-supremacist websites posted a photo of Bebout with his family, along with disparaging comments, his contact information and other personal details.

One should note that Dylann Roof was enamored of such groups.

Three years ago, in 2012, CNN ran a story titled “Has ‘whiteness studies’ run its course in colleges?”  The question was prompted by the fact of Obama’s election and what that supposedly signaled: a “post-racial” era.  But its conclusion is what is most interesting now, as we contemplate Charleston, McKinney, Texas, and Ferguson, Missouri, and all the other recent manifestations of virulent racism:

Some believe the idea of racism is shifting entirely. A 2008 poll by USA Today/Gallup and showed that 40% of adults in America think racism against white people is widespread in the United States. A study published last year said that whites increasingly believe that bias against whites is a bigger problem than bias against blacks.

The mass murders at Charleston, and certainly what happened in McKinney, show that this skewed reasoning is on the rise, and the Larger Fox Network is doing all it can to profit from this.  And this means that we need to develop a strong and consolidated set of strategies to fight it.  Besides strengthening anti-racist education, we need to turn to the rest of the media, outside Fox and its ilk.

This is absolutely essential; mainstream and other news venues must not weaken their attention to the systemic nature of racism in America.  We need to continue to file our commentaries consistently, and have our voices heard. We need to call out all the lies the Larger Fox Network spreads and more. It is not enough to ridicule them — we need to present a correct and accurate rebuttal to what they say. And more than that, we need news outlets to give us the space and time to get our viewpoints out there, even if it is not part of a major headline-grabbing news story. This is much more than a “story”; racism and white supremacy are disgraceful and utterly destructive parts of our national history. We need to read about that history, and learn from it.  The alternative looks very bloody.