It's not Fox News' America anymore: Americans want a dialogue on race and gun violence after Charleston

Right downplays guns & racism in wake of latest massacre, but Americans say it's time for a serious discussion

The political nature of last week’s Charleston massacre was evident as soon as its location was revealed. Emanuel African Methodist Episcopal (AME) Church is a historic African-American sanctuary where nine worshippers, including pastor and South Carolina State Senator Rev. Clementa Pinckney, were gunned down by a 21-year-old self-avowed white supremacist after he sat beside them for one hour during a Wednesday night Bible study session.

Yet conservatives, led by Fox News, rushed to silence any talk of motivate that deviated from the deranged lone shooter euphemism we’ve become accustomed to affixing upon white male mass murderers in America.

"Fox & Friends" host Steve Doocy thought it extraordinary that anyone would call the killings a hate crime the morning after the attack while his guest chided people for “jumping to conclusions about race.”

And after President Obama remarked on the need to “think about the issue of gun violence collectively” while addressing the church murders, conservatives lashed out, returning to their predictable refrain that Obama is a “gun grabber” intent on destroying the second amendment.

It became clear that conservatives wanted to sweep the Charleston shooting under the rug as just another tragedy, unpreventable and devoid of any larger lessons. Many 2016 GOP contenders shirked any discussion of race or guns in the immediate aftermath and when the discussion focused on The Confederate Flag flying on government property after images of Dylann Roof, the alleged shooter, posing in front of a Confederate Flag surfaced, many more were quick to chastise the media for politicizing a tragedy.

But according to a new Huffington Post/You Gov poll, most Americans disagree with conservatives and Fox News.

In a poll taken after the Charleston massacre, 83 percent of respondents agreed that “racism is still a problem in American life” and 65 percent agreed that now is the right time to discuss racism in America.

While 49 percent of respondents agreed that in the wake of yet another mass shooting, now is indeed the time to discuss gun control: 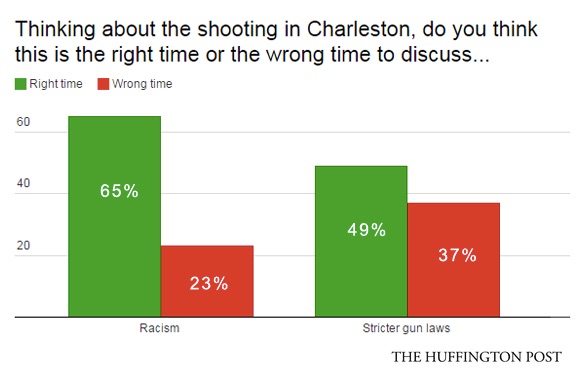 However, gun control remains a highly partisan issue. Democrats were 53 points more likely than Republicans to say now is the right time to talk about gun control.