Bernie Sanders & Cornel West: The radical alliance that could change everything

As the democratic socialist from Vermont tries to do the impossible, the firebrand academic could help 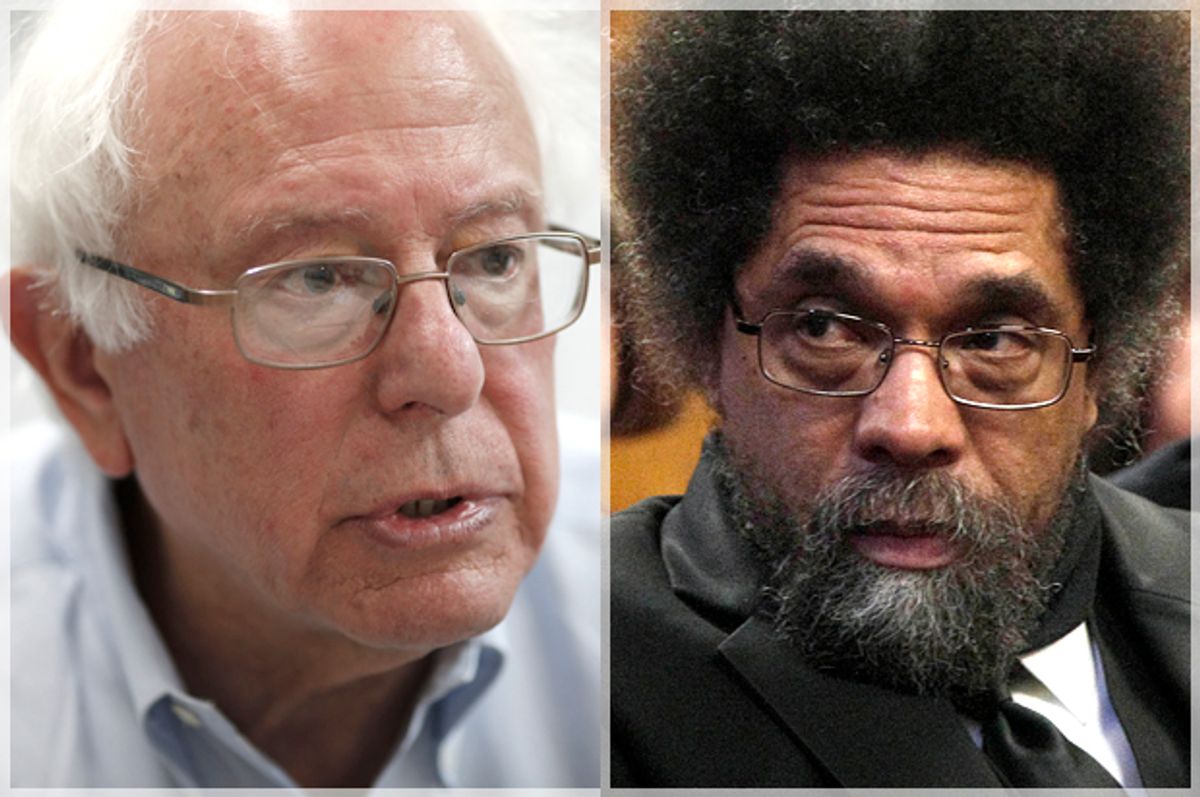 Senator Bernie Sanders' presidential campaign is already enjoying success that few could have predicted. Bernie is a big deal. Well, OK, if you're a white progressive he's a big deal. Otherwise, you may have no idea who he is, according to reporting this morning in the New York Times. The Times' Patrick Healy and Jonathan Martin write that "black voters have shown little interest in [Sanders]" and that "[e]ven his own campaign advisers acknowledge that Mr. Sanders is virtually unknown to many African-Americans, an enormously important Democratic constituency."

But as his presidential campaign gains altitude and attention, Sanders may be on the way to securing the most difficult black progressive endorsement there is: the blessing of Professor Cornel West, one of America’s leading public intellectuals. Celebrity is rare in American academe, but the eccentric West (along with MIT’s Noam Chomsky) is something of a superstar scholar. He's our Slavoj Žižek, but with far better hair and a sense of fashion.

Speaking with Grit TV’s Laura Flanders in early June, the black academic icon was asked by the host if he will be supporting the increasingly popular candidate for president.

“I love brother Bernie,” West replied. “He tells the truth about Wall Street. He really does.”

But West, who feels burned and spurned by President Obama, his team, and the Democratic Party generally, then turned immediately to the specter of Hillary Clinton. Sanders, though an independent socialist in the Senate, is running for the Democratic Party ticket, and West worried aloud about submission to the party hegemon, Secretary Clinton.

“I’m not a Hillary Clinton fan at all,” he said resolutely. “So if he uses his power to hand it over to her I’ll be deeply upset.”

West, ever-critical and stubbornly conscientious, was an early skeptic of then-Senator Obama’s campaign in 2007-08, only to sign on to the Obama team and do 65 events for the candidate after a conversation between the two convinced West of Obama’s progressive bona fides. Similarly, West has withheld a ringing and thorough endorsement of Sanders, citing Sanders’ positions on the Israel-Palestine conflict.

“But I also think, in terms of foreign policy, on the one hand we have escalating anti-Jewish hatred around the world, and we’ve got to fight anti-Jewish hatred under all conditions,” West began. “On the other hand, we have a vicious Israeli occupation that needs to be highlighted, because occupations are wrong.”

West continued: “I don’t hear my dear brother Bernie hitting that, and I’m not gonna sell my precious Palestinian brothers and sisters down the river only because of U.S. politics. The truth cuts over and against whatever the political arrangement is. So we’ve got to be able to somehow keep track of anti-Jewish hatred, which is evil, and occupations of whatever sort—in this case, the vicious Israeli occupation that’s evil as well. And I think Bernie might pull back on some of those issues.”

Senator Sanders has caught some flak for what’s seen by some as a less-than-progressive position on the Israeli occupation of Palestinian territory and its insanely disproportionate responses to extremists’ attacks from Gaza. Much of the recent criticism seems to be founded on a contentious town hall meeting with constituents in August 2014, when the senator and progressive pro-Palestine attendees descended into a shouting match, during which verbal fray he angrily told an interrupting interlocutor to “shut up!”

It must be said that Sanders’ positions and rhetoric on the Israeli occupation are reliably to the left of virtually all of Congress, if only marginally. But it must also be said, however, that being slightly leftward of the pack on Israel-Palestine in Washington is a far cry from active dissent in support of Palestinians’ rights to territory and safety. West voices the frustrations of many who see Sanders’ marginal progressivism on the conflict as much too little to affect the monolithic support which otherwise characterizes both parties. Some might even see Sanders as a curious, misshapen crag on that monolith.

Sanders appears a little (but only a little) freer to buck D.C.’s lock-step approval of Israeli occupation and aggression. The summer 2014 Israeli war on Gaza, which so angered the Vermont town hall attendees, was endorsed by 79 senators (40 Democrats and 39 Republicans) via Resolution 498, which Sanders refused to cosponsor. The resolution was adopted unanimously without a vote, so a refusal to cosponsor is something like a vote against the proclamation. However, Senators are permitted the right to object (which Sanders did not) when unanimous support for a resolution is requested, making Sanders’ refusal to cosponsor the measure something like a whisper of disapproval.

The war on Gaza officially sanctioned by the U.S. Senate left more than 2,100 Gazans dead, 500 of them children, with the Israeli citizen death toll at 6, one of whom was a child. The (very much bipartisan) narrative that Hamas and other extremists’ rocket attacks share any sort of commensurability with the Israel Defense Forces’ assault is vehemently rejected by American leftists and many progressives—that is, much of the base on whose support Sanders’ campaign relies.

Sanders was also the first senator to boycott Israeli Prime Minister Benjamin Netanyahu’s address to congress in March of this year, just half a year after the Gaza war. But Sanders explained his rationale in terms of partisan etiquette, not moral objection to the Netanyahu government’s actions. Sanders cited the crass campaigning he saw in the prime minister’s visit, what he viewed as the “Congress of the United States being used as a prop or a photo opportunity for [Netanyahu’s] reelection campaign.” The internationally recognized criminality of the Israeli state's occupation was left unmentioned as a reason to boycott the address.

That doesn’t cut it for West on Israel and Palestine. But even a passing grade from Professor West is tantamount to an endorsement these days, as West’s critical blade has been ground to a razor-sharp edge in the years since President Obama’s inauguration. West has weaponized his singular word-smithing and placed the president in his verbal crosshairs, calling Obama a “war criminal,” a “Rockefeller Republican in blackface,” a “global George Zimmerman,” a “black mascot of these Wall Street oligarchs,” a “drone presidency” and a “counterfeit.”

Senator Sanders is constitutionally incapable of committing most of the sins West attributes to Obama. While Obama might have been labeled a “socialist” by Republicans, he is in many ways a defender of the neoliberal status quo. Sanders is a proud democratic socialist. A Sanders foreign policy would very likely look less hawkish than Obama’s, and his would certainly be less trigger-happy than a potential Clinton Pentagon.

Though he’s become something of a pariah in black academic circles, West is still a captivating and rousing speaker and Sanders could perhaps use West on the campaign trail. He might not be someone Sanders brings along in Iowa or New Hampshire, but once the campaign trail swings south and to the cosmopolitan coasts, West might be a valuable voice in places Sanders’ unpolished, heavily Brooklynite earnestness doesn’t work as well. And Sanders could be the candidate West thought he was getting in Obama.