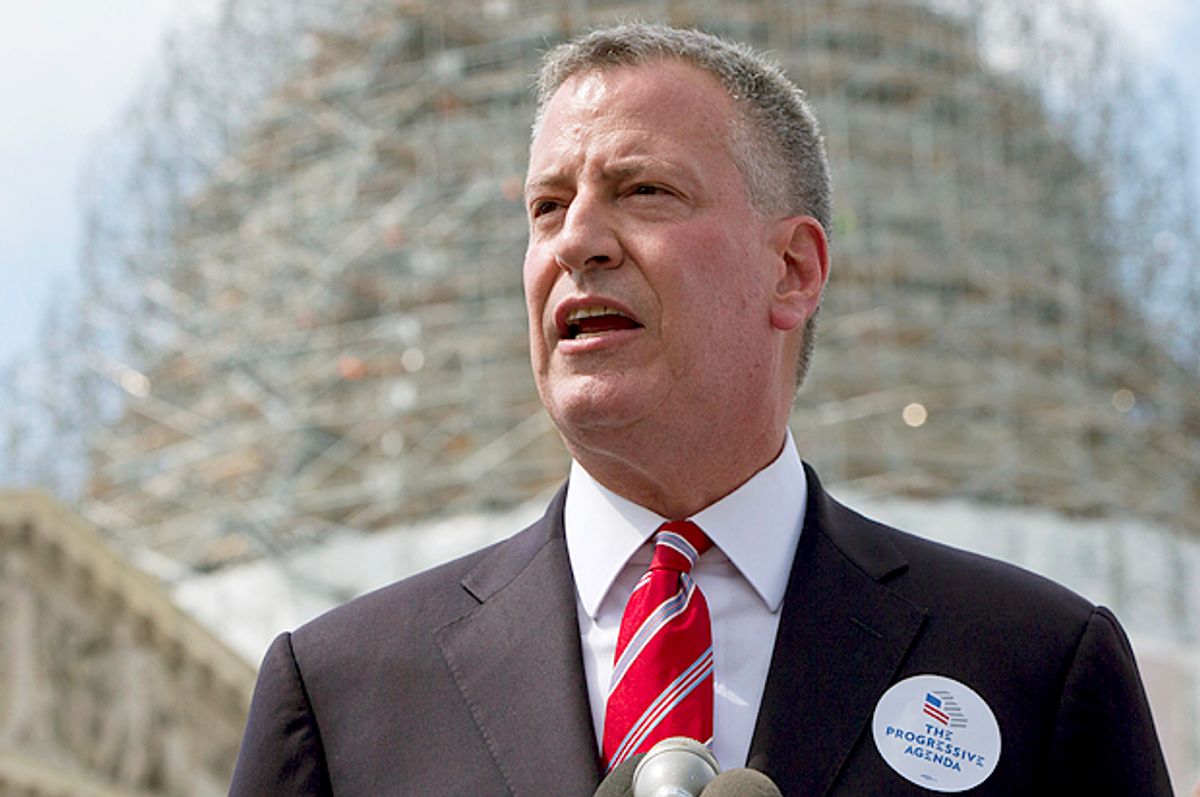 Bill de Blasio has long seemed to have his working definition of intersectional feminism down. For some time, the New York City mayor's talking points have been on-message, with promises that recognize the interplay of gender equality and reproductive rights, the minimum wage, family leave, educational opportunity and immigration. To grapple with the entanglement of progressive issues is messy enough work on its own, but in de Blasio's New York it has been framed as a necessity to achieving not only parity for women and men, but equality for all. It's a nice, lofty idea traveling slowly on a very long road.

And so de Blasio is trying to speed things up. On Wednesday, the mayor's office will announce the establishment of a city commission on gender equity, which emphasizes economic mobility and public safety as they pertain specifically to women and girls. That such a distinct anti-discrimination effort would be instituted by a progressive leader such as de Blasio -- who will announce the commission at an LGBTQ pride event Wednesday evening -- should come as no surprise. But the commission, on which First Lady Chirlane McCray will serve as honorary chair, is still notable for its inclusivity: Promoting "gender equality" isn't just shorthand for boosting women's status, but for improving the lives of transgender and genderqueer individuals, in particular, as well.

“We want city government to view the world through a wider lens, one that lets in a panorama of experience that encompasses all New Yorkers, regardless of gender identity,” McCray said. “We want them to feel like city government understands where they are coming from and where they are going, no matter how they identify or who they love.”

As Maya Wiley, counsel to the mayor, explained to Salon, the commission is purposely intersectional, and is intended to build upon and draw connections between the city's existing partnerships with UN Women and the UN Safe Cities Initiative. Designed to view a spate of issues from a gender lens, Wiley claims the commission will approach discrimination and inequality as issues with extensive roots, which sprout weeds in myriad aspects of life.

"Women are almost half of the labor force," Wiley said. "But we know that far too many women are in poverty, almost 22.3 percent of women compared to 20 percent of men. Women are more likely to be overrepresented in low wage jobs. We know that women are often not paid the same as men. There are also issues, frankly, with domestic violence and safety issues for women and girls."

"But when you actually think about the kind of gender roles and discrimination often face, it doesn’t come to women who are only heterosexual," she added. "Sexual orientation and gender roles have as much of an impact on women who are lesbians, for example, and even more so in terms of the assumptions of what women’s sexuality should be. And it’s extremely important that we as a city and as a nation protect the rights and interests of transgender women."

As far as specifics go, the goals of the commission remain nebulous -- a side effect of de Blasio's recognition that society's gender problem is deeply entrenched and not easily solved, but a hurdle nonetheless. In addition to listing the expected game plan -- "advocate for women, girls, transgender and intersex residents," "make recommendations to the mayor regarding legislative or executive action to improve the lives of women" -- Wiley also laid out some of the commission's primary focus areas, including improvements to public safety, gender-based income inequality, and gender diversity in New York's fire and police departments.

"But we can’t do that," Wiley explained, "unless we broaden the lens and understand that gender is fluid, sexuality is fluid. When we actually help free men from some of the roles and stereotypes that they have to carry, we are actually creating a world in which people can be who they want to be, how they want to be, and still have the opportunity to see themselves and their families and be full citizens of our city."