Sincere calls for stricter gun laws are wrong: Without racial justice, it will backfire on minority communities 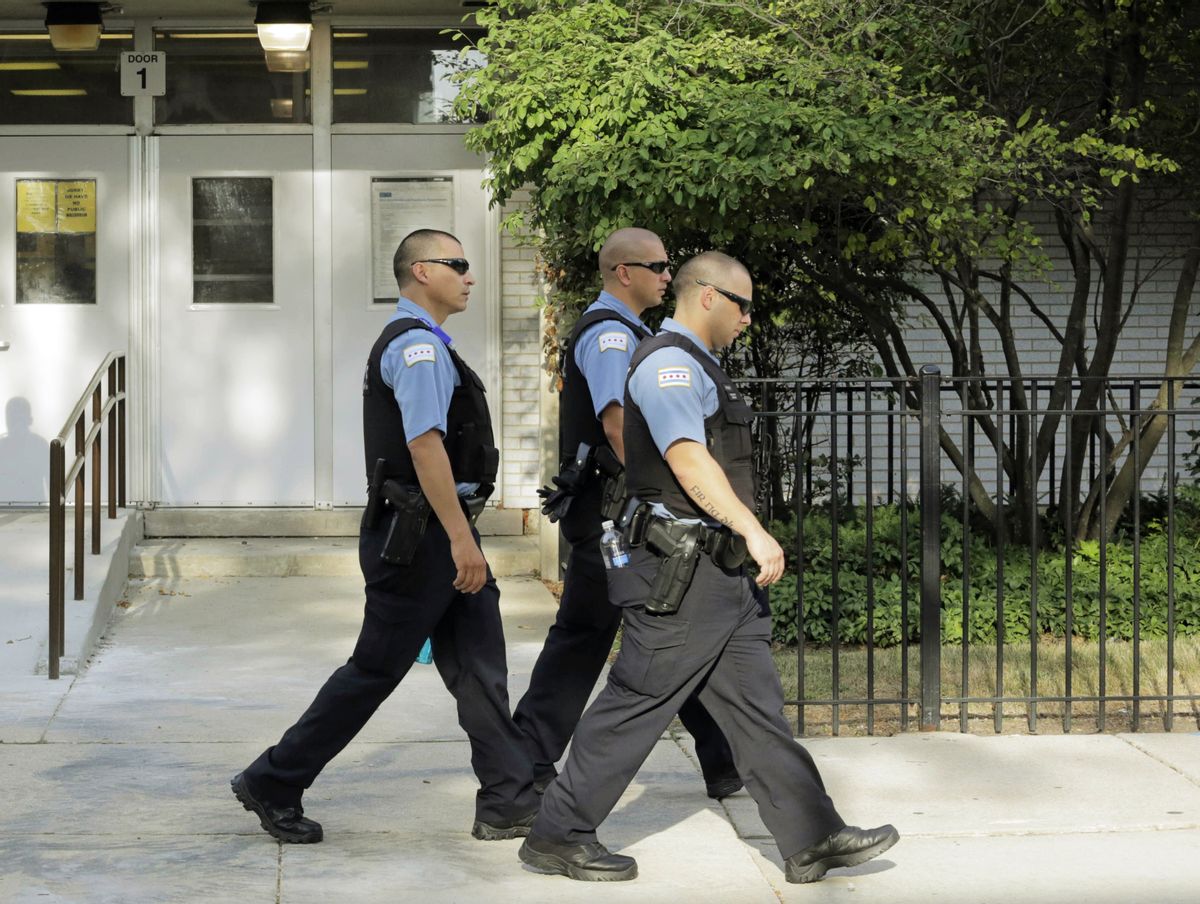 The American Civil Liberties Union of Illinois says that Chicago police officers are employing the controversial "stop and frisk" practice more than officers in New York City, where a judge ruled the widespread practice discriminated against minorities. (AP)
--

The dead are buried, the murderer apprehended, and the shock has started to wear off. Now comes the public reaction to the massacre in Charleston.

Soon after the shootings at the Emanuel African Methodist Episcopal Church in Charleston, South Carolina, the first black president of the United States offered some thoughts on Dylan Roof’s racist attack. First and foremost, President Obama said, recent events were about how "innocent people were killed in part because someone who wanted to inflict harm had no trouble getting their hand on a gun." The killings were also about a "dark chapter in our history," namely racial slavery and Jim Crow. Obama only suggested practical action regarding the first issue, namely gun control.

He did not consider that such measures will make the persistence of the second problem even worse.

It is perhaps counterintuitive to say so but gun control responses to mass killings – whether racially motivated or otherwise – are a deep mistake. The standard form of gun control means writing more criminal laws, creating new crimes, and therefore creating more criminals or more reasons for police to suspect people of crimes. More than that, it means creating yet more pretexts for a militarized police, full of racial and class prejudice, to overpolice.

As multiple police killings of unarmed black men have reminded us, the police already operate with barely constrained force in poor, minority neighborhoods. From SWAT to stop-and-frisk to mass incarceration to parole monitoring, the police manage a panoply of programs that subject these populations to multiple layers of coercion and control. As a consequence, more than 7 million Americans are subject to some form of correctional control, an extremely disproportionate number of whom are poor and minority.

While it is commonly assumed that the drug war is to blame for all this, work by scholars like Benjamin Levin and Jeff Fagan demonstrates that already existing gun control efforts also play an important role. One of the most notorious areas of policing, the NYPD’s stop-and-frisk program, was justified as a gun control rather than a drug war measure. In the name of preventing violence, hundreds of thousands of poor minorities are subject to searches without probable cause each year. Further, a range of Supreme Court-authorized exceptions to standard Fourth Amendment protections against illegal search and seizure derive from a concern with gun violence.

This invasiveness is a necessary feature of criminalized gun possession. After all, policing guns is just like policing drugs. Like drugs, there are a vast number of guns. Possession is far more widespread than can possibly be policed so decisions have to be made about where to devote resources. Furthermore, since possession itself is the crime, the only way to police that crime is to shift from actual harm to identifying and preventing risks. As legal scholar Benjamin Levin argues in a forthcoming piece

“Searching for guns – like searching for drugs – can easily become pretextual, a proxy for some general prediction of risk, danger, or lawlessness.”

In other words, there must be selective enforcement, where enforcement includes invasive searches based on existing prejudices about who is and isn’t dangerous. For example, as research by Jeff Fagan and Garth Davies shows, in the late 1990s, the NYPD used suspected weapons violations to justify numerous stops, even though these stops resulted in fewer arrests than stops for other crimes. And when it comes to individualized assessments of who is dangerous and worthy of punishment, every study shows steep, and unfounded, bias. Michelle Alexander, quotes a former U.S. attorney in her recent sensation, "The New Jim Crow," saying the following:

“I had an [assistant U.S. attorney who] wanted to drop the gun charge against the defendant [in a case which] there were no extenuating circumstances. I asked, ‘Why do you want to drop the gun offense?’ And he said, ‘He’s a rural guy and grew up on a farm. The gun he had with him was a rifle. He’s a good ol’ boy, and all good ol’ boys have rifles, and it’s not like he was a gun-toting drug dealer.’ But he was a gun-toting drug dealer, exactly.”

This isn’t just a point about conscious and unconscious biases towards poor minorities – biases that some imagine can be removed with proper training. No matter how neutral the laws are, their enforcement must remain unequal and unfair. That is because the policing involved would never be tolerated if they affected politically influential groups to the same degree. These policing practices persist because they are disproportionately directed against marginal populations.

Once individuals find themselves arrested gun control reappears as a reason for increasing punishment. Gun possession can be used to enhance sentences for other crimes and even functions as a kind of double punishment when that possession becomes the reason for also tacking on an extra criminal charge. Gun charges are also a part of the excessive and racially unequal over-charging practices that not only contribute to rising incarceration rates but also ends force numerous individuals away from trial and into plea bargains. Poor Blacks and Latinos are easily intimidated by charge-happy prosecutors into accepting plea deals, meaning they never see their day in court. Some even end up admitting to crimes they did not commit just to avoid the possibility of more severe punishments. More criminal gun laws would only feed this deeply unjust system.

There is an unrecognized gap between the justification for gun control and its most likely effect. There is no reason to expect fair enforcement of gun control laws, or even that they will mainly be used to someone prevent these massacres. That is because how our society polices depends not on the laws themselves but on how the police - and prosecutors and courts - decide to enforce the law. Especially given how many guns there are in the U.S., gun law enforcement will be selective. That is to say, they will be unfairly enforced, only deepening the injustices daily committed against poor minorities in the name of law and order.

It is hard to imagine any feasible gun control laws doing much to decrease mass shootings. But it is easy to see how they will become part of the system of social control of mostly black, mostly poor people. There are already too many crimes, there is too much criminal law, and there is far too much incarceration -- especially of black people. To the degree that all that is part of the "dark chapter in our history," given the deep injustice of our society, and especially its policing practices, the actual practice of gun control will continue that dark chapter, not resolve it.

That, perhaps, is why the demands that have emerged from the #blacklivesmatter movement focus not on gun control but instead on demilitarizing the police and investing in “jobs, housing, and schools” for those “black communities most devastated by poverty.”

What happened in Charleston is a horrific tragedy. The criminal law will not solve it. I wish I had a better solution ready at hand. I don't, though I think it would start by freeing our political imagination from instinctively reaching for the criminal law.