White supremacy never had a better friend in a higher position than Calhoun. One of 12 Yale colleges bears his name 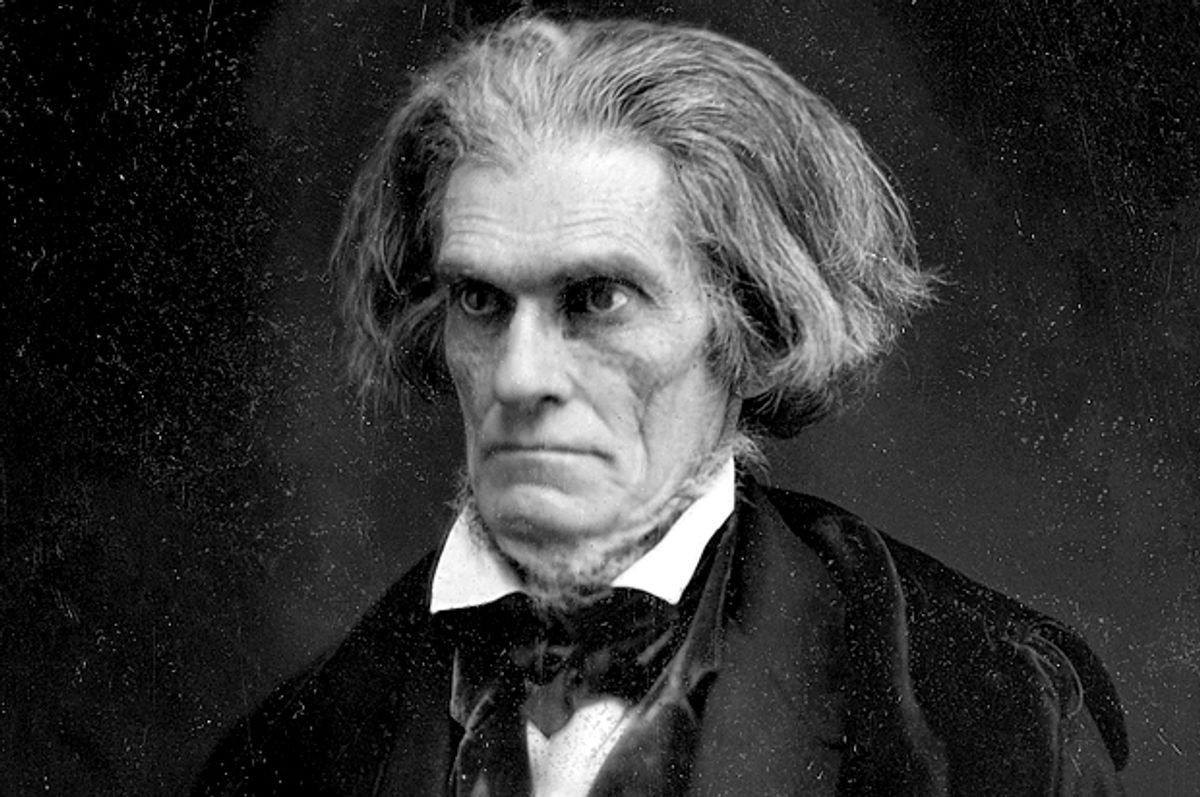 White supremacy never had a bigger, better friend in the U.S. government than John C. Calhoun which is why it’s weird to think of Angela Bassett and Henry Louis Gates Jr. living in a complex named after the Great Nullifier.

And it didn’t happen in the South. It happened at Yale.

Calhoun was Congressman, Senator, Vice President (to Andrew Jackson), Secretary of State, Secretary of War and, in a harder to quantify way, the Mayor of the South for a long period preceding his death in 1850.  His was the most piercing voice championing the arguments that blacks were inferior to whites and that slavery was a “universal condition” essential for the maintenance of any “civilized and wealthy society.”

While other Southern voices tried to frame slavery as a necessary evil, Calhoun averred that slavery was necessary but not evil. In 1931, a time more tuned to rapprochement than reproach, Yale decided to name one of its 12 colleges, which form the spine, heart and lungs of the university, after Calhoun, apparently just because he was a graduate.

Calhoun literally casts a long shadow in Charleston. His statue looms over the city’s main square, atop an 80-foot column, and Emanuel African Methodist Episcopal Church is 110 Calhoun Street.

In both places, Charleston and Yale, there has been push-back against the man who said, in a typical pronouncement:  “Ours is a government of the white man…there is no instance whatever of any colored race, of any shade being equal to the establishment and maintenance of free government.”

Legend in Charleston has it that black folks drove the original Calhoun statue – by Northern sculptor Albert E. Harnisch – out of the city’s Marion Square by directing physical abuse at it.

The actor Roger Guenveur Smith, a Yale alumnus whose mother is from Charleston, told me that the modern Calhoun-on-a-pedestal was the result of African-Americans paying regular visits to the old Great Nullifier statue, placing feces on its lap and setting them ablaze.

Great story. Probably not true. The Harnisch statue included a chair, but Calhoun stood in front of it, pointing in his idiosyncratic way.

In other versions of this story, locals dragged keys and other sharp objects across the likeness of Calhoun.

Probably also not true. The white folks who ran the town never liked Harnisch’s vision of Calhoun and replaced it with a different statue in 1896. It didn’t even last ten years.

Meanwhile, when Chris Rabb, who is African-American, showed up at Yale as part of the class of ’92, he struggled to absorb the notion that he would be living inside the walls of Calhoun College, where the highest ranking official is called “the master.”

“I was pissed,” Rabb said this week on my radio show. “I was insulted, I was shocked, I was mad as hell.”

It got worse. There was a piece of stained glass in the college that showed a black man in shackles kneeling at Calhoun’s feet. Rabb couldn’t take it.  He demanded that the glass be removed and eventually prevailed.

Then he went home for the holidays, and his activist grandparents told him, “You were wrong to do that.”

Rabb’s family told him they didn’t believe in papering over reminders of institutional racism.

This also was the view of Jonathan Holloway, a professor of African-American Studies who became the first black “master” of Calhoun. Holloway has said in the past that he preferred to leave the college’s name and iconography intact as “an open sore” and an opportunity for discussion.

But on Monday, Holloway sent this email to my producer: “I've been opposed to changing the name of the college because I've felt that it absolves Yale from a terrible decision. I have to confess, however, that the events of the last 18 months and especially the monstrosity in Charleston have rattled me. Yes, the historian in me still sees with alarm our national propensity to forget ugliness for the convenience of the modern moment, but the citizen in me just keeps seeing example after example of an inability to imagine that African Americans have a humanity that ought to be respected.”

I should know. I graduated in 1976, part of a largely apolitical post-Panther cohort whom President Kingman Brewster despairingly named “the era of grim professionalism.”

For three of my four years, my roommate was an African-American man, Ken Jennings. He tells me the Calhoun name was a topic of discussion, if not a towering issue at the time. He’s not surprised I never noticed. “A lot of this kind of thing is below the radar if you're not of African descent. I always say it's like being left handed. The world is oriented to right-handedness to the point where righties don't even notice.”

Rabb agrees. “A fair number just didn’t really care. And it wasn’t just white folk…There was a lot of loyalty to the brand, and I found myself fairly lonely in this struggle to make waves.”

Rabb is bittersweetly amused by the way he has become the first phone call for anyone Google-searching this issue.  He’s not a strip-the-name advocate but another person arguing that “this needs to be discussed.” He eventually found, on other branches of his own family tree, powerful white slaver families who bankrolled Yale.

That’s an important truth. Elihu Yale was a key figure in the Indian Ocean slave trade, and the Ivy League wasn’t all that different from the Cotton Belt in its reliance on starter capital stained with the blood of slaves.

Still, there’s something especially noxious about Calhoun and about a name bestowed as late on the American timeline as 1931. What were they thinking?  And what should we think now?