A black church loved us: We were welcomed with open arms, just as Dylann Roof was in Charleston

"You should come back," they said, as we shopped for a church that felt like home. How could we refuse? 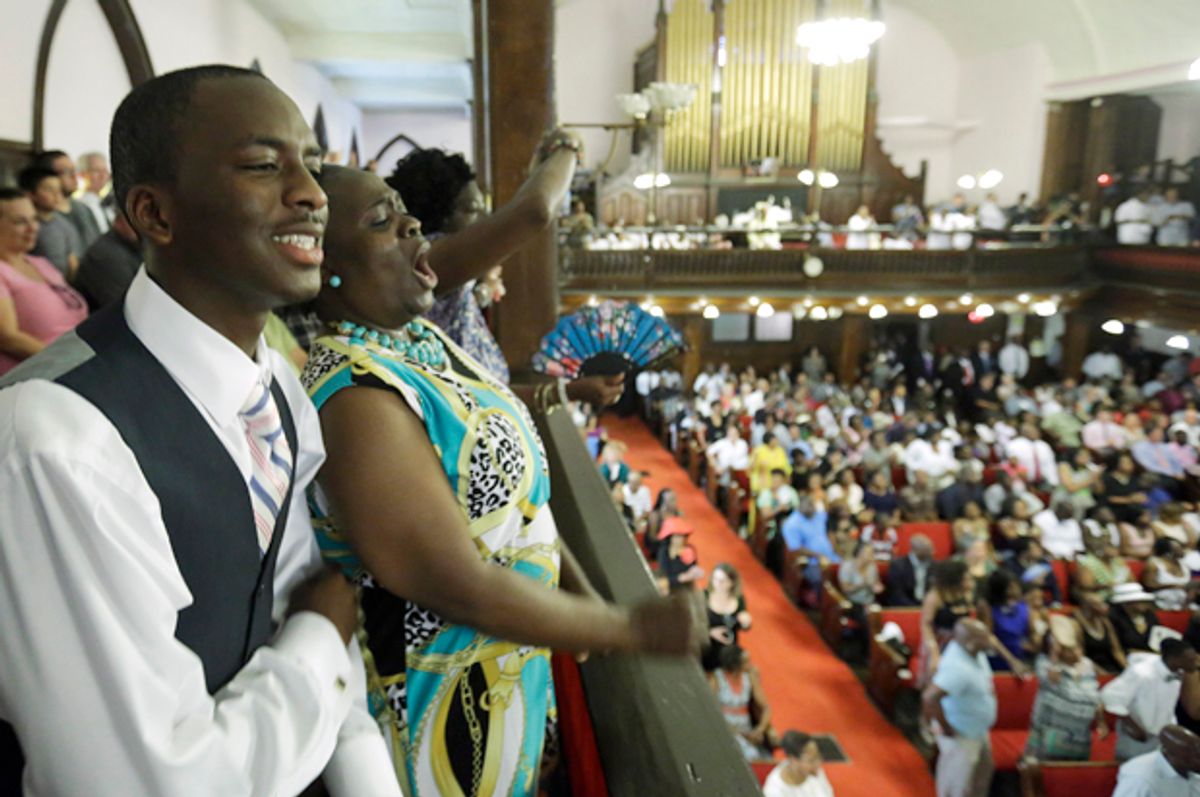 When I first glimpsed the pictures of the victims of Charleston's Emanuel African Methodist Episcopal Church shooting, I let out such a loud sob-moan that my husband looked at me, startled. After all, I didn't know Rev. Clementa Pinckney, Rev. Sharonda Singleton, Alice Hurd, Rev. Middleton DePayne-Doctor, Ethel Lance, Myra Thompson, Rev. Daniel Simmons Sr., or Tywanza Sanders, who died trying to save his elderly aunt, Susie Jackson.

But what set me off was the swirly blue background of many of the victims' photos, which I recognized as church directory pictures. My husband and I had had similar portraits done as members of the Sheldon Street Church in Providence, Rhode Island. It was the second black church we belonged to -- even though neither of us is black.

It was something of a surprise that my husband and I attended church at all. He had not been raised as a regular churchgoer. And for me, since age 9 I'd been practicing Buddhism while also attending church with my Korean immigrant parents. But when my husband, then boyfriend, and I were living in New York, a writer friend introduced us to the Korean Methodist Church and Institute, which had a unique English-language service and community for 1.5- and second-generation Korean Americans -- as well as a Korean-born, but hip, minister for whom my Buddhist practice was "not ideal," but which he tolerated.

Our minister eventually presided over our wedding. My new husband was going to be starting his first academic job in a small town in Ohio and so Pastor Albert researched churches in the area and informed us that to his surprise, this tiny town had two Methodist churches, and so he sent us off with the addresses of both.

First we went to the one closest to where we would be living and found it not unwelcoming, but neutral. The people had obviously lived in the community for a long time, and they all knew each other. The building was new and modern and sterile, in the vicinity of the college's famous conservatory.  The second church, Rust United Methodist, was in an odd part of town, on the other side of a creek and down a side street so obscure and hidden it took us forever to find it.

We almost felt a bit of an "oops" when we walked in and realized it was a black church. However, so many people smiled warmly, said hello, beckoned to us -- I recall an older lady in a marvelous hat even took my elbow and bellowed a hello! -- that we couldn't refuse. We felt self-conscious and sweaty (it was un-air-conditioned), but no one else seemed to give us a second thought. One of my favorite parts of the Methodist service is "the peace," where the minister goes into the congregation to grant you peace, and you greet the people next to you. We were greeted with such an effusive and genuine warmth, I was almost taken aback; what did I do to deserve such an expression of love? It turns out I didn't do anything, except exist. "You should come back," one woman told us. "We just love people to death!"

A week later, I left for Korea to start my year-long Fulbright fellowship, the timing of which was also "not ideal," but it couldn't be helped. Karl insisted I go, even though we'd just gotten married, the wedding pushed up a bit because his mother had been diagnosed with pancreatic cancer.

Karl was left alone in this small town where he knew no one. His maiden teaching foray would be at this small, insular school where most of the faculty were settled with families, the younger profs decamping to Cleveland, about an hour away. This was also before social media and Skype might have made things less lonely.

On Sunday, Karl found himself back at Rust, where he was, again, warmly welcomed, so he decided to continue. An older woman would always see him, pat the seat next to her and say, "You can sit here." Karl wasn't the only white person; the minister was married to a white woman, one of the keyboardists who accompanied the choir was white. The other regular was a mentally challenged young man whom the church had basically adopted, and Karl. But the church was definitely a black church; one of Karl's college students, who lived across the street from Rust, once saw him coming out of the church on Sunday and looked at him, agape with surprise.

That Ohio year was a tough one. Karl returned home from a day of teaching to a tiny, damp house, empty except for feline yowls, as his father and I had assigned care of our cantankerous cats to him. He had little to do other than alternately worry about his career prospects (this job was a temporary one) and think about his dying mother, and his father who was having trouble coping.

His stressed-out days were punctuated by Sundays, when he dressed up and went to Rust. "The black church is about being kind to one another in the midst of struggle," he once said to me. "It helped me face the week ahead." When his mother died, the church was there for him.

My return from Korea was accompanied by the wonderful news that Karl had gotten a tenure-track job in Providence, where we'd gone to college. I accompanied him to a few more services at Rust. I saw how much Karl had become a part of the community and was grateful for how they had supported him while I was gone.

In Providence, we tried the Methodist church downtown, a car ride away (New Yorkers to the core, we like to walk). We thought we might like the Unitarian church, given my Buddhist leanings. We tried a Congregationalist church solely because we could walk to it.

One Sunday when I was away, Karl was wandering around the neighborhood where we lived, Fox Point, which had been the traditional home for Portuguese and Cape Verdean immigrants. The Sheldon Street Church seemed less of a church than a building with a parking lot on a residential street, but Karl, intrigued, walked in. Again, he was one of the few white people in a multiracial, mostly black congregation. Cape Verde had been a Portuguese colony where African slaves were brought to work in the plantations, so Cape Verdean immigrants tend to be of mixed heritage.

Because of the Portuguese influence, Cape Verdeans also tended to be Catholic, but because early immigrants found themselves unwelcome, as blacks, by the Catholic Church of the Holy Rosary across the street, they formed their own church, which became affiliated with the American Baptists, who had split with the Southern Baptists over slavery, and later become known for their involvement with civil rights issues.

Karl found himself unexpectedly at home in this church; he was particularly taken by the wise sermons of its minister, Rev. Naomi Craig, a woman in her 80s who had the energy of a 25-year-old. Sheldon Street's services and music were similar to those at Rust, in a distinctive gospel, black-church style, although the congregation reflected the multicultural neighborhood: African-Americans, Cape Verdean Americans, Portuguese Americans. Pastor Craig's husband was both black and a Narragansett Indian; there was also a woman from Mongolia, as well as mixed and multi-race couples from nearby Brown and RISD, who often stumbled into the church the same way we did. Karl volunteered with the church's history committee. When Pastor Craig retired, she personally chose him to head the committee for the scholarship being established in her name. She came out of retirement for a day to baptize our son.

I also attended Bible study. There were never more than 10 of us -- about the size of the Charleston Bible study -- who met regularly on Wednesday nights. One night, a wild-eyed and scruffy young blond man came through the doors. I remembered stiffening; we all knew he wasn't someone who came to our church. I still don't know why he was there, but the Bible study leader was cordial, and invited him, the lone white person, to sit down. It's customary to bring a Bible, which he didn't have, so he was given one. He sat with us for a few awkward minutes, speaking up only to argue, out of nowhere, that Mary Magdalene was a prostitute. The leader gently got the discussion back on track, and the man got up in a huff and left.

That memory comes back to me now with a sickly sheen. That a stranger's sudden appearance set off alarms in my head -- who comes to a Bible study without a Bible? Who just shows up to Bible class without going to the church, first? My adrenaline racing, I had many un-Christian thoughts; I was judging the man by his unshaved face, his race, his dirty T-shirt, and his belligerence. I had both admired and worried that the leader greeted this man as warmly as he would have greeted any regular.  As he would have greeted Jesus, I suppose. Sometimes in your life you do meet people who truly don't judge, who choose love over fear, no matter the consequences.

I have been thinking about the Charleston shooting a lot. When the blond, white killer walked into that Bible study group, if it was anything like ours had been, it would have been immediately apparent he was a stranger. It might have even seemed odd, suspicious; while people are apt to "drop in" on a church service, one is much less apt to drop in on a Bible study, which is more like a class than worship. But even still, he was treated with warmth. In fact, in a statement to police, the killer stated that the people were so "nice" to him, he, for a moment, considered not going through with his plan. And yet he did. He murdered innocent people who welcomed him. Who did not for a second question a non-black person coming to a black church, even though, given the history of violence and black churches, they had every right to.

Writing about another terrorist act, Sept. 11, the writer Ian McEwan consciously takes the spotlight of his writerly attention off the perpetrators and onto the human beings being terrorized. How, knowing they only had a few more minutes to live, so many of the doomed called home:

"There is only love, and then oblivion. Love was all they had to set against the hatred of their murderers."

"We love people to death!" our friend at Rust had told us. And the victims of the shooting at the Charleston Emanuel AME, indeed, did love, right up until the end.