Bernie Sanders has a Joe Biden problem: His toughest 2016 opponent isn't even in the race 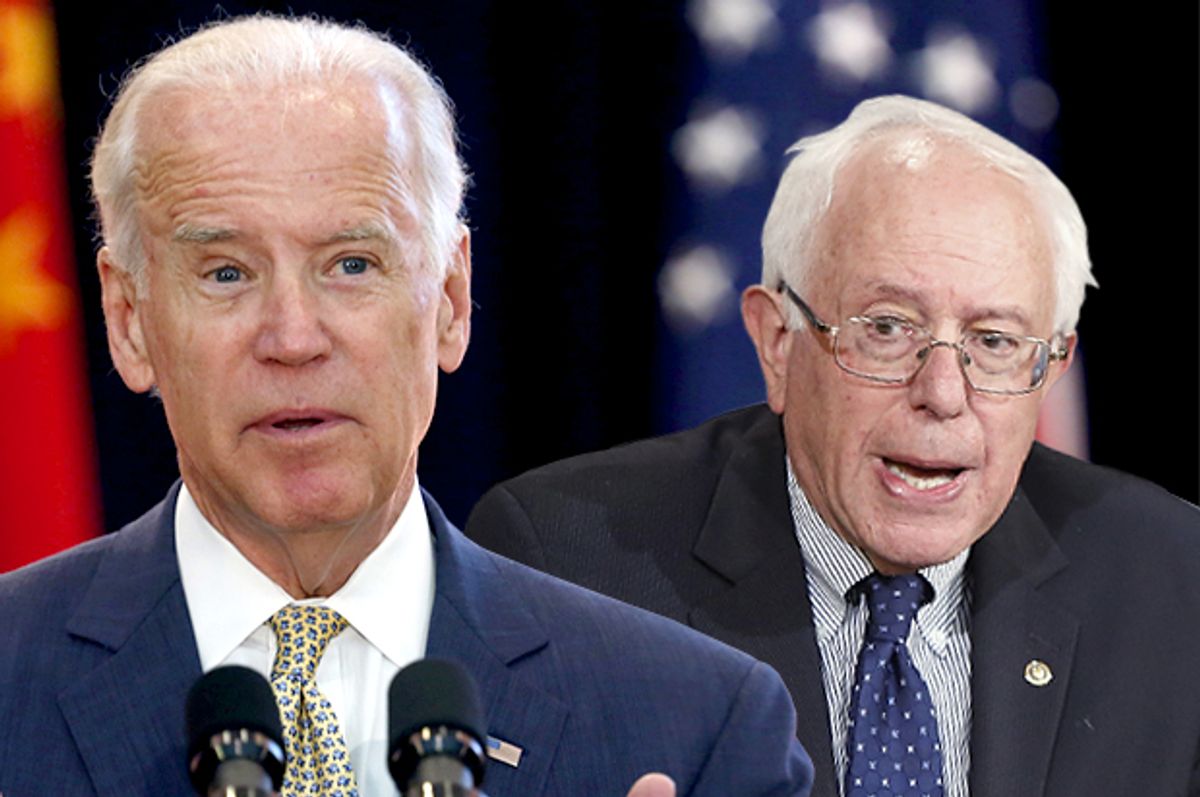 Political observers are abuzz over the so-called Sanders surge, with Vermont Sen. Bernie Sanders drawing massive crowds at campaign rallies and eating into frontrunner Hillary Clinton's (still-sizable) lead in the crucial primary state of New Hampshire. But Sanders's early momentum may yet be stalled by a Democratic grandee who's unlikely to even enter the 2016 race: Vice President Joe Biden.

Though Biden has yet to declare his 2016 intentions, those in the vice president's orbit privately say that he's virtually certain to forego a third White House run, unless events somehow force Clinton out of the race. (Try as Benghazi committee chairman Trey Gowdy might to conjure just such an event, this is a decidedly unlikely scenario.) Moreover, as Biden has shepherded his family through the illness and heartbreaking death of his son Beau, he has understandably put politics on the back burner. At any rate, Biden is expected to make his plans known by early August.

Let's assume Biden sits the race out. In that case, Sanders's long odds of dislodging Clinton grow even longer.

This may seem counter-intuitive. After all, political prognosticators have hammered into our heads for the better part of three years that Hillary Clinton is the runaway favorite to claim the Democratic nomination in 2016; indeed, she boasts the near-unanimous support of the Democratic establishment and enjoys polling numbers that make her the most formidable non-incumbent in modern history. That said, there remains a large chunk of Democratic voters who tell pollsters they're either undecided or supporting other candidates; according to Real Clear Politics's polling database, Clinton averages 62 percent support among Democratic primary voters nationally, suggesting that nearly four in 10 Democrats aren't ready for Hillary. Of those voters, about 10 to 15 percent tell pollsters that Biden is their top choice for the Democratic nod. With Biden out, his base of supporters will drift toward other Clinton challengers, right?

Not so fast. Dive deeper into the data, and it quickly becomes apparent that Biden's backers aren't anybody-but-Hillary voters who will naturally flock to Bernie Sanders, Martin O'Malley, Jim Webb, or Lincoln Chafee once Biden steps aside. But instead, they're largely old-school Democrats -- primarily a mix of white working-class voters with an affinity for the everyman Biden, and African Americans loyal to President Obama's top lieutenant. Consider a CNN poll from earlier this month, in which Biden took 14 percent of the Democratic vote nationally to Clinton's 60 percent. (Sanders claimed 10 percent.) Biden's support was strongest among voters who never attended college (20 percent, to Clinton's 63 percent and Sanders's four percent) and non-white voters (21 percent, compared with Clinton's 62 percent and Sanders's five percent). Of the early primary states, Biden performs best in South Carolina, with its heavily African American Democratic primary electorate. Real Clear Politics's polling average finds Biden winning about a fifth of the vote there, with Clinton taking 60 percent and Sanders below five percent.

As Sanders's underperformance in these groups underscores, these are not natural constituencies for the progressive Vermonter. Although his populist campaign appeals to voters' economic anxieties, Sanders's strongest support comes not from downscale voters and marginalized racial and ethnic groups, but from affluent, well-educated white progressives and intellectuals who share Sanders's disgust with Wall Street excess, corporate greed, and rising inequality -- forces that have further divorced them for the worldview of plutocratic elites. (Chris Hayes has perceptively called this phenomenon the revolt of the upper middle class.) Such voters were a key segment of then-Sen. Barack Obama's successful 2008 Democratic primary campaign -- but Obama's triumph over Clinton would not have been possible with their support alone. Absent his overwhelming support among African American voters in 2008, Obama would currently be gearing up for his 2016 presidential run, after grinding out another eight years in the U.S. Senate.

It's telling that New Hampshire -- a state that is 94 percent white -- is the geographic center of the Sanders surge; two recent polls there showed him trailing Clinton by just 10 and 12 percentage points, and Real Clear Politics's polling average finds the former secretary of state at 47 percent overall in the Granite State -- still 25 points ahead of Sanders's 22 percent, but her worst performance of the cycle so far. Sanders may also chip away at Clinton's lead in Iowa (92.5 percent white); most recent surveys there have found her more than 40 points ahead, but the latest, from Bloomberg, shows a closer race: Clinton takes 50 percent, while Sanders follows at 24 percent.

Sanders begins his bid, then, as the proverbial "wine rack" candidate, beloved by the well-off liberal denizens of Burlington, Park Slope, and Boulder, while Clinton and Biden are classic "beer rack" contenders -- dominating among less-educated voters and racial and ethnic minorities. With Biden out of the race, Clinton claims many erstwhile supporters of the vice president, extending her already-healthy lead over Sanders. Take the national surveys: With Biden in the mix, most recent polls have put Clinton about 40 to 45 points ahead, with Sanders and Biden roughly tied for second place. Polls that don't include Biden, by contrast, show Clinton leading Sanders by about 60 percentage points; NBC News and the Wall Street Journal this week found Clinton at 75 percent and Sanders at 15 percent, while a Public Policy Polling survey earlier this month put Clinton at 65 percent to Sanders's nine percent. Even in New Hampshire, the epicenter of Sanders's strength, Biden's absence hurts him. Those two polls showing Sanders almost within single digits of Clinton both included Biden; the latest, from Bloomberg and St. Anselm College, does not, and it finds Clinton further ahead, with 56 percent to Sanders's 24 percent.

At this stage, of course, it's exceedingly difficult to envision a general election featuring any Democratic candidate other than Hillary Clinton. With that caveat, it's worth asking what Sanders would need to do to boost his performance among the demographics in which he's weakest -- and thereby attract more serious attention from the Clinton camp. It would be egregiously unfair to depict Sanders as apathetic about civil rights -- the man attended the 1963 March on Washington, and has long decried the legacy of racism -- but as my colleague Joan Walsh has noted, Sanders has failed to make minority issues (criminal justice reform, targeted aid for communities of color, and discrimination in areas like housing and employment) a centerpiece of his campaign. With his focus on inequality, Sanders is a vital voice in the progressive debate -- but if he doesn't convincingly address the concerns of racial and ethnic minorities, he undercuts the appeal and effectiveness of that message. There are signs that Sanders is adapting to this reality; in recent days, he's been increasingly vocal about the need for immigration reform, and following last week's Charleston massacre, Sanders was unequivocal in condemning the persistence of racism in American life.

These are, no doubt, commendable steps. But the numbers make clear just what a daunting task Sanders faces if, as he insists, he intends to run more than a protest campaign.