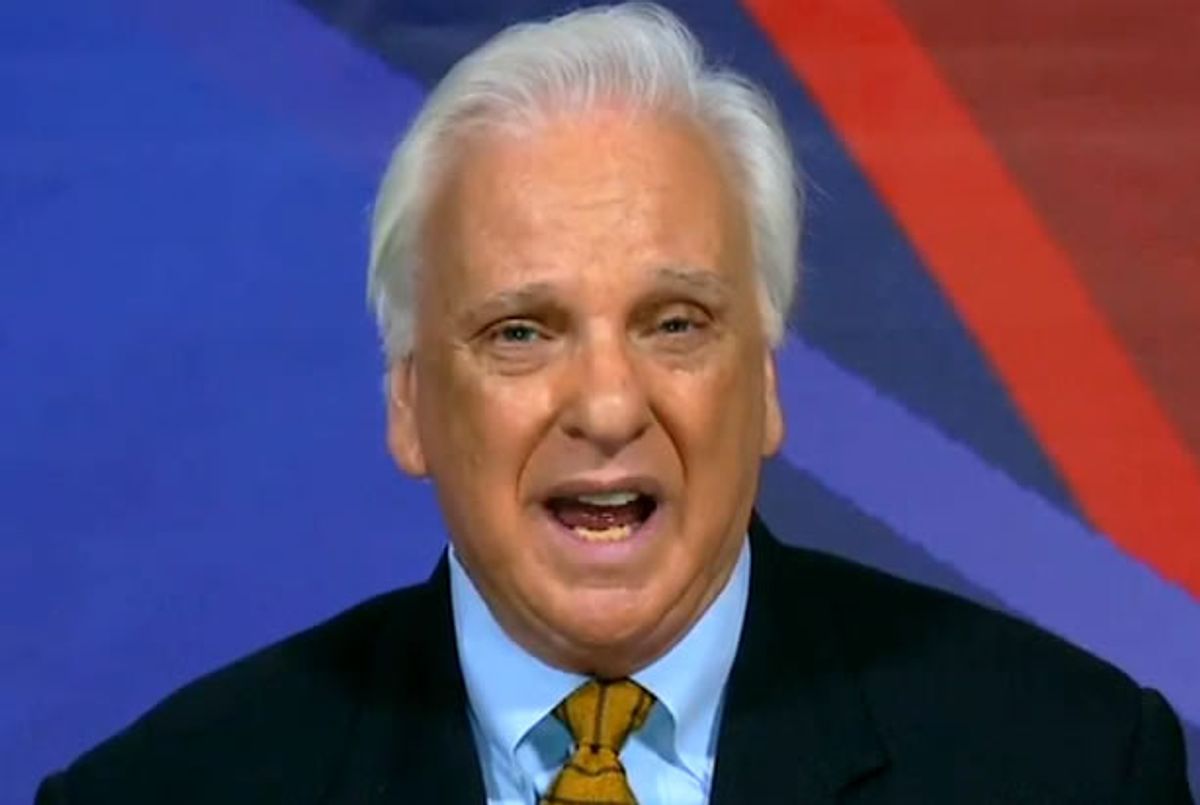 Fox News media analyst Bernie Goldberg appeared on "The O'Reilly Factor" Wednesday night to defend host Bill O'Reilly's honor after liberals, like MSNBC's Chris Hayes, took him to task for giving airtime to the most idiotic defenses of the Confederate flag -- even if, as O'Reilly repeatedly claimed, he attributed said defenses to "some people," and did not endorse them himself.

On that point, O'Reilly was adamant, saying that in his discussion the previous evening with Fox News contributor Juan Williams, he merely claimed that "for some people who see it in a historical context, [the Confederate flag] represents bravery, and on your side, it represents hate -- and everyone should know what the two sides are." Instead of attacking O'Reilly for presenting a false dilemma, however, Chris Hayes and other "race-hustlers" did "what they always do," and accused the Fox News host of holding the belief that the flag "represents bravery."

Which, fair enough -- whoever was responsible for clipping that excerpt for "All In" did edit it deceptively, leaving out that O'Reilly was merely attributing this position to "some people." However, that editorial decision does not mean, as O'Reilly claimed, "that America is being besmirched in an almost unprecedented way."

But as is his wont, Goldberg agreed with O'Reilly, saying that the "hard left" had no choice but to criticize him, as they "show how virtuous they are by bashing America as a racist country, because it makes them feel better about themselves."

"Here's my message to the progressives out there," he declaimed. "Charleston, South Carolina -- as terrible as that was -- is not Selma, Alabama. Baltimore is not Selma, and Ferguson was not Selma."

"Progressives amuse me," he added, "because they don't progress. They're stuck in the past. This is not the same America as we were in 1965. That was fifty years ago! We have changed for the better, and we've changed a whole lot."

O'Reilly then claimed it's "just a fact" that there "isn't an epidemic of ill-will against blacks" today, claiming that the statistics -- which he didn't cite -- backed him up on this. "Some believe," he said, again attributing a belief to an amorphous, unspecific group people, "that the progressive movement to diminish America and label it a racist nation is political, that way they can mobilize the black community to vote for the left."

"If it's a political play," Goldberg replied, "it's a bad, bad move," because there's "a reasonable middle in this country" who, since Obama's first started campaigning, have tired of liberal rhetoric that equates opposition to the president's policies to racism.

He concluded by claiming that liberals have turned "racism" into "a meaningless word -- once upon a time, it was a serious indictment, now it's mush thanks to the left."