Walmart doesn't get any credit for not selling the Confederate flag

A handful of major companies and red states are ditching the flag en masse. But this isn't courage. Far from it 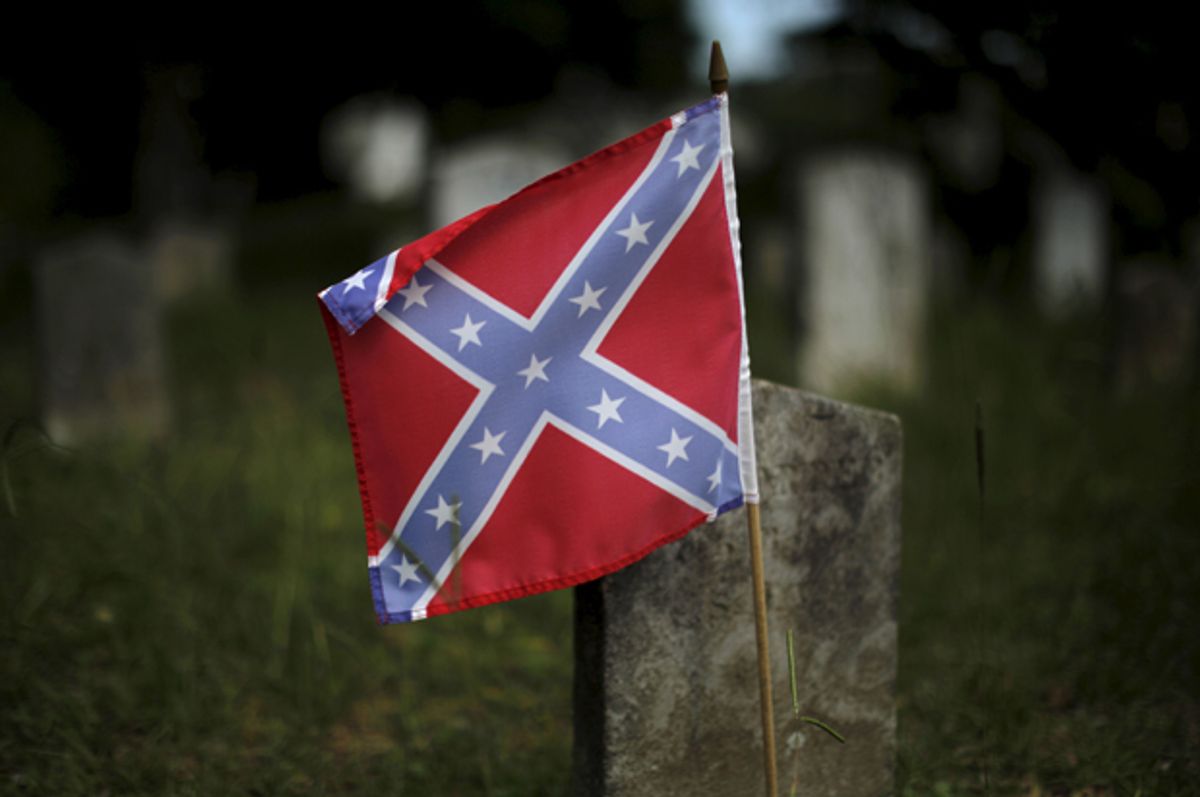 Sure, at long last, it's gratifying to observe southern states slowly-but-surely acknowledging that the Confederate flag is a completely inappropriate symbol of the South's cultural heritage. Frankly, however, the first sentence of this article should have been published 150 years ago.

Following the heart-wrenching massacre of African-American worshippers in Charleston, allegedly at the hands of a white-supremacist gunman, South Carolina Gov. Nikki Haley announced on Monday that finally, finally, finally the state should consider removing the flag from its Capitol grounds. Meanwhile, Alabama governor Robert Bentley followed suit on Wednesday by ordering the Confederate flags (plural -- yikes!) removed from the statehouse grounds as well, calling it "the right thing to do."

Whereas Alabama officials immediately removed the flags, it's going to take some serious political heavy-lifting before the flag is removed in South Carolina, since it requires a two-thirds majority vote in each chamber of the Capitol. Representatives of the backwater districts are sure to put up a fight and there's really no guarantee Haley's request will be confirmed. And, not to go full Debbie Downer here, but a two-thirds majority in both chambers -- in South Carolina -- seems like a stretch.

So, as of today, the flag still flies in Charleston.

Elsewhere, retailers are following suit by discontinuing sales of the flag. Sears, Amazon, Ebay, Etsy and Walmart have decided that June 2015 is the right time to finally stop earning a profit from sales of a symbol of slavery, racial bigotry and treason, not to mention a military engagement that precipitated the deaths of 600,000 Americans. (Regarding Walmart, maybe it'd be a good idea to discontinue the sales of assault weapons, too. Just trying to help!) While writing this article, by the way, I searched for the flag on Google Shopping and this message came up: "Your search -- confederate flag -- did not match any shopping results." So, good for Google as well.

It's all fantastic news, really, save for the fact that none of these places should have been selling the flag in the first place.

The horrendous symbolism of the Confederate flag was, prior to the Charleston massacre, mostly ignored. In lieu of other issues and other debates, the fact that it was still flown on flagpoles, worn as fashion accessories and sold by major retailers was almost taken for granted as a thing that we'd just have to learn to live with. This despite the unequivocal reality, whatever conservatives would argue, of what that flag really means. Simply stated: It not only represents all of the terrible things that orbit the American Civil War, including, to repeat, treason against the United States, but it's a symbol of the terrible Lost Cause mythology that emerged following Reconstruction.

As a means of reuniting the North and the South, a revisionist effort at every level of American society, including popular culture, literature and politics, emerged. The Lost Cause, as it became known, superimposed a glossy, noble patina over the ugly truth of southern secession and slavery. Among other things, it inaccurately replaced slavery with "states' rights" as the motive for secession, because, well, anything's better than slavery.

Furthermore, African-Americans were unjustly characterized as the real villains of the war, something racists from Maine to Florida could all easily agree on. With a common enemy, white America could finally coexist, regardless of geography or secessionist tendencies. By the turn of the century, African-Americans were being portrayed in theater and silent films as lazy, shiftless rapists -- films, by the way, that preceded "Birth of a Nation," and which were exponentially more racist, believe it or not. "Birth of a Nation" itself, the epic centerpiece of the Lost Cause, lionized the Confederacy and the KKK in eyes of white Americans, desensitizing the country to the true evils of what the flag represented, as well as numbing our national morality to the lynchings, the vigilante justice, the neo-slavery and the nefarious Jim Crow laws that passed in all states.

From this pervasive whitewashing effort, the Confederate battle flag became a mutually agreed upon and universally acknowledged symbol of southern pride. But it clearly shouldn't have been. Today, in 2015, too many southerners continue to embrace it while refusing to embrace the hellscape; they refuse to own the century-plus waking nightmare that was so much a part of the African-American experience following the war, for which the South was almost entirely responsible. Flying the flag at the state Capitol or selling it in Walmart is a constant reminder, a constant reinforcement and ongoing legitimization of things that should otherwise be, in a sane world, shameful. And that's exactly what the flag should rightfully symbolize to white southerners: shame.

Worse yet, it required the deaths of nine African-American parishioners in Charleston to finally begin to consider downplaying the flag. It should never have come to this, and every state -- every retailer -- that waited until after Dylann Roof opened fire before reconsidering the appropriateness of the flag should be justifiably shamed and scolded, rather than applauded.

Ultimately, if the South really, really desperately needs a symbol of its regional heritage, why not a mint julep or a pecan log from Stuckey's? It doesn't matter as long as it's not that flag. The war is over. The Confederacy lost. And now's the time to finally take ownership of what happened; to own what the flag really stands for. Enough of this childish cowering behind bogus, manufactured symbolism. Let the Confederate flag burnings commence in earnest, and dedicate each one to an African-American man, woman and child who was wronged under the symbolism of that banner.