"As You Wish": Cary Elwes on "The Princess Bride," doing his own stunts, and whether he'd rather fight with a sword, his hands or his wits 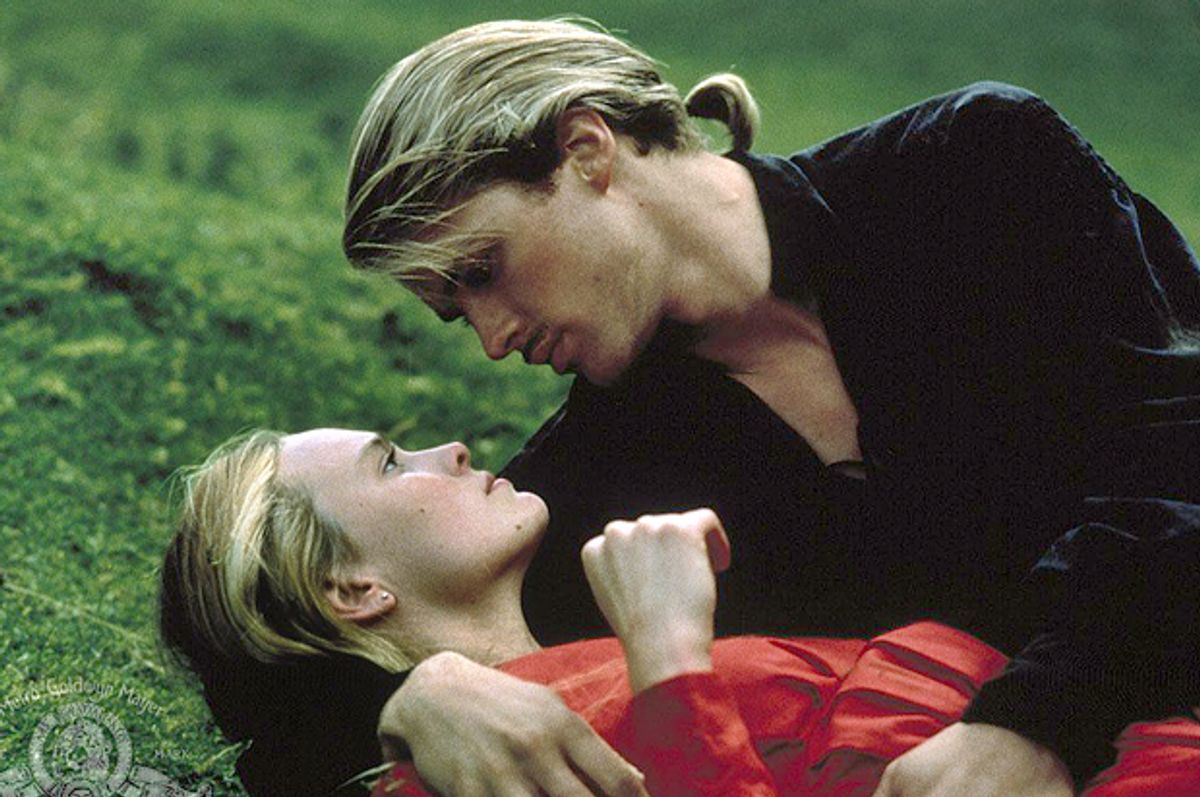 Cary Elwes and Robin Wright in "The Princess Bride" (MGM)
--

When it was released in 1987, “The Princess Bride” may not have stormed the box office like the film’s characters storm the castle, but this charming, timeless adaptation of William Goldman’s novel has become a cult favorite, one that exceeded everyone’s expectations. It also defies some classification. Most folks tend to think of it as a children’s film, but it is one of those films adults love perhaps more than their kids.

“Bride” help launched the career of actor Cary Elwes, who last fall published a book, “As You Wish: Inconceivable Tales from the Making of ‘The Princess Bride,’” and is currently on tour to promote it. [The actor/author will be appearing at the New Jersey Performing Arts Center in Newark on June 28; the Keswick Theater in Philadelphia on July 11, and the NYCB Theater at Westbury on July 12, among other venues.]

The book provides an account of Elwes’ experiences making the classic film, from getting to know his leading lady, Robin Wright, to working with an all-star cast of comedians—Billy Crystal, Carol Kane, Christopher Guest, Mel Smith and Peter Cook—as well as the talented actors Mandy Patinkin, Chris Sarandon, Wallace Shawn and André the Giant. Many of the cast and crew, including director Rob Reiner, writer Goldman and producers Andrew Scheinman and Norman Lear contribute anecdotes that flesh out Elwes’ tales of giants, monsters (i.e., Rodents of Unusual Size), chases, escapes, miracles, true love and yes, kissing.

The actor recently took a break from shooting a new movie to chat with Salon about “The Princess Bride,” playing Westley, and writing “As You Wish.”

You’ll always be identified with Westley. What responsibility do you have from making “The Princess Bride” and being a “matinee idol” to the film’s fans?

The responsibility is that I have to live up to people’s expectations. Hopefully the book helps do that. I had to run it all by William Goldman—it’s his favorite of his works. My greatest expectation is to fulfill Goldman’s wishes and write a book that wouldn’t diminish that. I am still very flattered by fans, and for being part of something that is now bigger than all of us.

What prompted you to write the book and provide a behind-the-scenes look at making the film?

I wrote it because it was so much fun making this film. I asked all my colleagues if they were going to write a book, and they said no. So I asked if they would mind if I wrote one, and if they would all be a part of it. I was lucky to get them on board.

There are considerable action scenes—the greatest swordfight in modern times—the trapdoor in the quicksand stunt, wrestling with both Andre the Giant, and a Rodent of Unusual Size (albeit not at the same time). Can you talk about training for the film, and have you used the skills since? (e.g., in “Robin Hood: Men in Tights?”)

My training certainly helped, but “Robin Hood” was long swords that were very heavy and difficult to manage. There wasn’t as much training for “Robin Hood.” “Princess Bride” involved a lot of work because Rob [Reiner] wanted us to do the stunts ourselves. We trained every day. Mandy and were both left-handed!

What can you say about honing your comedic talents making the film?

Rob was coming off “Spinal Tap” and “The Sure Thing,” and he was wrapping up “Stand By Me,” so I felt very comfortable in his hands. Obviously, he’s wonderful comedian. He allowed me to do the physical [comedy]—the “mostly dead” stuff—by improvising. I had to show Rob various states of being (im)mobile.

What about the torture scenes in the film? Were they fun to shoot or as painful as they looked? (Good practice for “Saw”?)

They were awkward in that I had suction cups attached all over parts of my body, but they were very funny because Chris Guest and the late Mel Smith were hilarious. Mel was so wonderful. He came up with the bit with the cough and missing the step, and his cold sore. That cold sore! I couldn’t look at it! He had to act with someone who looking at the other way.

I wouldn’t want to fight a giant for real, and my swordfight training isn’t up to par, so it would have to be wits. But going up against Wally Shawn, a Rhodes scholar who speaks five languages! Oh, Gosh! I’d be fine if it was against someone not quite that intelligent.

I understand there are “Princess Bride” action figures. Do you have any?

Yes. There are some out there. I got sent one by a fan, and what’s funny, is that when the movie came out there was no merchandise. Norman Lear, who owns the picture and the merchandise, couldn’t believe that the film has become this thing and that there are key chains and…you name it. You couldn’t possibly imagine!

How do you think the film influenced your career and your subsequent roles? Do you feel you were typecast as heroes, or that you deliberately tried to play villains?

I mixed it up a bit, and tried to do as many things as possible. After the film came out, I was offered many swashbuckling roles, which I turned down. But the film has helped my career. It’s been a blessing—the gift that keeps on giving.

You write about your inferiority complex regarding working with big stars, and not just André the Giant-big. Can you discuss how making the film helped you as a actor, or push you out of your comfort zone?

I think that I was nervous about working with all the talent, so I studied them. I didn’t know Robin’s work; I’d not seen “Santa Barbara.” I knew Chris Guest and Chris Sarandon and Wally Shawn and Mel Smith, etc., so I was intimidated. I was the new guy. [Laughs] So there was a lot of pressure. I broke my toe, and I was worried they were going to put me in a cab and send me home. Rob was saying—[imitates Reiner’s voice] “You’re going to be great in the sword fight! I know you’re going to learn it!"—and thankfully, he was great [when I got injured], and waited to shoot the fight scene at the end of the movie, when I had healed. Lesson: Never play around on an All-terrain vehicle when you don’t know how!

You gush, appropriately, about Robin Wright, and write in “As You Wish” about insisting on shooting the kissing scenes with her again and again. There is a scene in the beginning of the film between you both that is pure magic. What accounts for Robin being your favorite leading lady?

We were two blondes—that’s very rare. The other thing is that she has a wonderful sense of humor. She takes her work seriously, but doesn’t take herself seriously, and we bonded on that level. It was a relaxed set, but when Rob yelled action, people were incredibly focused. It was fun. Everyone showed up to have fun and do their thing.

You also write fondly about Andre the Giant, who was incredibly generous, even when he was farting. Why do you think you bonded with him more than the other cast members?

He was just a wonderful human being. “Larger than life” is trite. He had an incredible heart, and he was so dynamic. He was very gentle and delicate and was a joy to be around. He taught me not to sweat the small stuff, and how to be gracious around people. I took note of that. He was pestered all day long by folks who wanted to shake his hand or take a photo with him, and he always did it. People left his presence more than satisfied at having met him. He made time for people.

OK, fess up, are there any episodes that you didn’t or couldn’t put in the book?

I think it’s all there. I tried to cover it all. I don’t know…maybe that Jimmy Stewart was up for the grandfather role? But Peter Falk was so great….