The greatest threat to American democracy, the dissenters agreed, is "the nine of us" 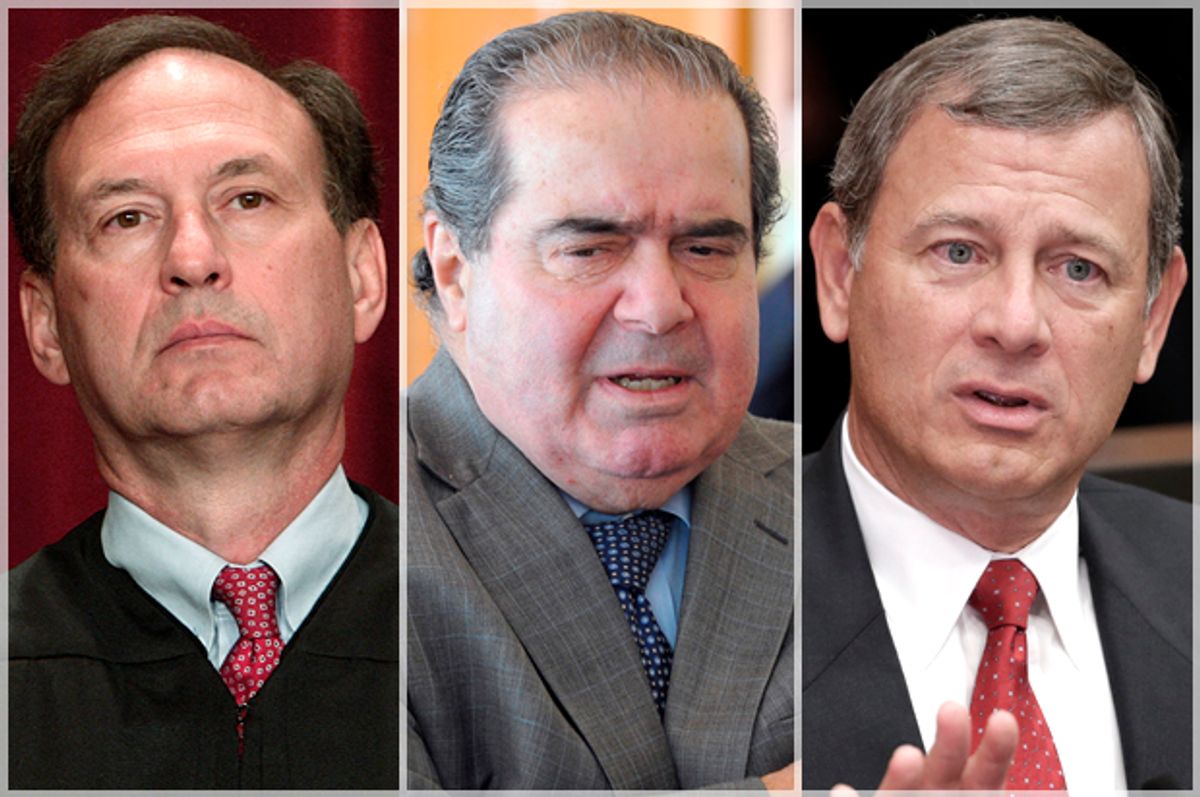 Word that the Supreme Court extended same-sex couples the right to marry anywhere in the United States is likely to dominate the next few news cycles, but as always, the first people with a chance to respond are those who dissented, and here are some of the "highlights."

In his dissent, Chief Justice John Roberts wrote that by taking "the extraordinary step of ordering every State to license and recognize same-sex marriage," the Court has "stolen this issue from the people" in a way that "will for many cast a cloud over same-sex marriage, making a dramatic social change that much more difficult to accept."

The Court, he argued, "seizes for itself a question the Constitution leaves to the people, at a time when the people are engaged in a vibrant debate on that question. And it answers that question based not on neutral principles of constitutional law, but on its own 'understanding of what freedom is and must become.'"

"The Court’s accumulation of power does not occur in a vacuum," Roberts added. "It comes at the expense of the people. And they know it."

He also positioned the decision atop an all-too-familiar slippery slope, claiming that "[i]t is striking how much of the majority's reasoning would apply with equal force to the claim of a fundamental right to plural marriage."

Roberts concluded with a back-handed high-five, writing that "[i]f you are among the many Americans -- of whatever sexual orientation -- who favor expanding same-sex marriage, by all means celebrate today’s decision. Celebrate the achievement of a desired goal. Celebrate the opportunity for a new expression of commitment to a partner. Celebrate the availability of new benefits. But do not celebrate the Constitution. It had nothing to do with it."

Justice Antonin Scalia began his dissent by noting that "[t]he substance of today's decree is not of immense personal importance to me."

"It is of overwhelming importance, however, who it is that rules me," Scalia continued. "Today’s decree says that my Ruler, and the Ruler of 320 million Americans coast-to-coast, is a majority of the nine lawyers on the Supreme Court."

The greatest threat to America and democracy, Scalia repeatedly noted, "is the nine of us."

"The strikingly unrepresentative character of the body voting on today’s social upheaval would be irrelevant if they were functioning as judges, answering the legal question whether the American people had ever ratified a constitutional provision that was understood to proscribe the traditional definition of marriage."

Given that, "what really astounds is the hubris reflected in today's judicial Putsch," although Scalia's not any happier about "the opinion's showy profundities [being] profoundly incoherent."

"Huh?" he asked after quoting a passage of the majority's opinion. "What say?" he said of another. "Ask the nearest hippie."

In fact, throughout this section, Scalia engaged in a running parenthetical dialogue with the majority's opinion before deciding "[i]t stands for nothing whatever, except those freedoms and entitlements this Court really likes."

Scalia also wrote in a footnote that if he "ever joined an opinion for the Court that began" as this one did, "I would hide my head in a bag. The Supreme Court of the United States has descended from the disciplined legal reasoning of John Marshall and Joseph Story to the mystical aphorisms of the fortune cookie."

Justice Clarence Thomas was more direct in his dissent, noting that "[t]he majority apparently disregards the political process as a protection for liberty," and that their "decision threatens the religious liberty our Nation has long sought to protect."

He later joined the Chief Justice atop that slippery slope, claiming that "it appears all but inevitable that the two will come into conflict, particularly as individuals and churches are confronted with demands to participate in and endorse civil marriages between same-sex couples."

Justice Samuel Alito warned that the decision will have "other important consequences," as "[i]t will be used to vilify Americans who are unwilling to assent to the new orthodoxy."

"I assume that those who cling to old beliefs will be able to whisper their thoughts in the recesses of their homes," he wrote, "but if they repeat those views in public, they will risk being labeled as bigots and treated as such by governments, employers, and schools."