I couldn't be their "happy girl": Pixar's "Inside Out," childhood depression and the emotional stranglehold of "Minnesota nice"

When appearing pleasant at any cost is a defining cultural value, admitting you're unhappy is the biggest struggle 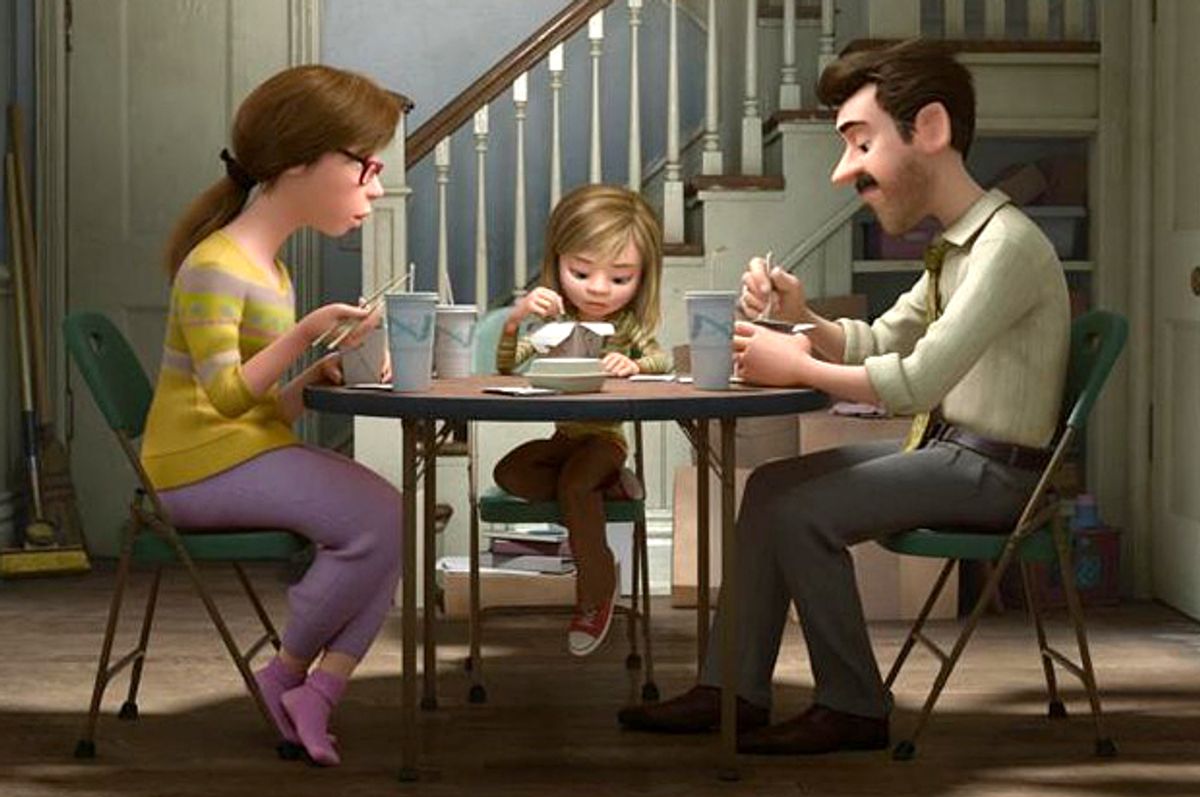 There’s a story I tell people about my childhood growing up in South Dakota that involves me sitting in my bedroom and crying, heartbroken. I’m 10 years old and though the catalyst for my tears is long forgotten, the despair is not. Tears were a frequent part of my childhood, so much so that I realized that I had lived this precise scenario every day for as long as I could remember. That each day of my life, some portion of it had been committed to sitting alone and crying over some sadness or slight (imagined or otherwise.) Even then, I realized something was fundamentally wrong, and though it would be years before my depression diagnosis, that was the moment the idea crystallized for me.

That’s the story I tell when people ask about my history of depression. What I fail to mention when I recount the tale is the immediate aftermath of my realization, the deep and abiding shame that accompanied the idea that I couldn’t just “be happy.”

In Pixar’s latest effort, “Inside Out”, an 11-year-old girl named Riley Anderson and her parents move to San Francisco from Minnesota. It’s a stressful undertaking that puts Riley’s emotions through the wringer, yet allows her the deeper sense of emotional wellbeing necessary to become a balanced and reasoned adult. However, buried in the subtext of the film is a message that speaks deeply to the reality of growing up in the Midwest.

Often classified as “Minnesota nice,” the Nordic background of much of the upper Midwest contributes to a mindset that values emotional restraint over honest dialogue about wellbeing. In the pop culture landscape, this dysfunction is often cast in a (darkly) humorous light, the most recent example being the television adaptation of Coen brothers’ classic film “Fargo.” Showrunner for the FX series Noah Hawley even speaks to the repression of the area, saying, “It felt to me like a regional thing, where someone who’s so buttoned up and constrained by polite society, to make a declarative sentence is to risk offending someone.”

In “Inside Out”, this sense of emotional misrepresentation makes for a perilous situation, leaving a young girl, raised in an environment where appearing happy is valued over all else, left unequipped to process difficult emotions when they come calling.

Riley and her parents' relocation to the West Coast is more than a story catalyst, it’s an opportunity to undo the latent damage of a restrictive social environment. For Riley, that is. To look at the emotional consoles of Riley's parents is to see the cost of living too long in a place that encourages uniformity and repression. Running each parent's respective console is a team made up of a single gender, uniformly represented. For mom, the team leader is Sadness. For dad, Anger. For both, Joy takes a backseat. While each parent has a fully functioning console run by a cooperative team, it's telling that they each default to emotions far from the Joy they encourage their daughter to exhibit.

The Midwest is a beautiful place full of many genuinely kind and loving people. But too often there’s a pervasive sense that unpleasantness is better off not seen or heard or, if possible, felt at all. My own depression, with me since I was born, went undiagnosed until I was 18 years old because, despite my parents' love and affection, we did not have the vocabulary to speak about the dire reality of my situation and because of that, we all suffered.

But this issue is not relevant only to the center of the country. In certain parenting circles online, there are discussions about what attributes in your children you should praise and which to avoid. Some parents advocate not praising your children for their beauty because it places too much value on how they look and not enough value on who they are. In the Washington Post, Sharon Holbrook explains why she chooses not to praise her daughters for their looks, saying, “The more I talk about beauty and looks, even in a positive way, the more I’m conveying the importance of those things.”

Others suggest children not be praised for being smart, as such things are beyond their control and say nothing of the amount of effort they exhibited. Anthropologist Gwen Dewar says specifically, “When you praise kids for their intelligence, they learn to view their failures as evidence of stupidity.” Therefore, it makes sense to think that when it comes to children, it’s important not to weigh happiness so heavily that they fear that experiencing any other emotion is failure. “My happy girl,” Riley’s parents call her, mourning her absence, even as Riley remains in their presence, failing to see that their sad girl or mad girl is just as real as any other iteration.

If nothing else, encouraging children to be open and aware of their emotions will make it easier to identify when there’s something wrong. A parent-child relationship built around honest and open emotional appraisals means that a child suffering from the numbing effects of deep depression, illustrated in the film with a full emotional console shutdown, is much more likely to get the care they need than a child who’s been encouraged to play through the pain, no matter what.

Such awareness would have been invaluable in my own childhood, as bad habits, when reinforced for years and years, are difficult to break. The idea of swallowing my unhappiness and putting on a happy face was so ingrained into my DNA that when my mother asked 16 year-old me point-blank if I was depressed, I scoffed in denial. My mother was, is, my best friend, and perhaps because of that I could not find it within myself to tell her how unhappy I was. I thought it would break her heart.

In reality, my mother’s heartbreak came instead at the revelation that I spent so much of my life suffering from undiagnosed mental illness. But ultimately, that heartbreak was necessary for us to move forward. Though our relationship in the past was close, it’s nothing compared to our relationship now. Coming clean about the depths of my depression, with all of the ugly, nasty baggage that went with it, allowed us new freedoms in how we openly communicate with each other, finding no emotion so unpleasant that we can’t work through it together. My life is immeasurably improved by allowing myself the luxury of letting go of the repression I was raised with and accepting that it’s okay to not always be the “happy girl.”

“Inside Out” is a brilliant tale about the importance of feeling all of your emotions, even the unpleasant ones. It teaches children, even if they don’t know it at the time, that the best way to experience true happiness is to let yourself feel fear and anger and sadness and all of those emotions you might otherwise be afraid of. It’s a lesson to all, regardless of age or locale, that feeling things other than happiness won’t ruin your life and, in fact, just might save it.