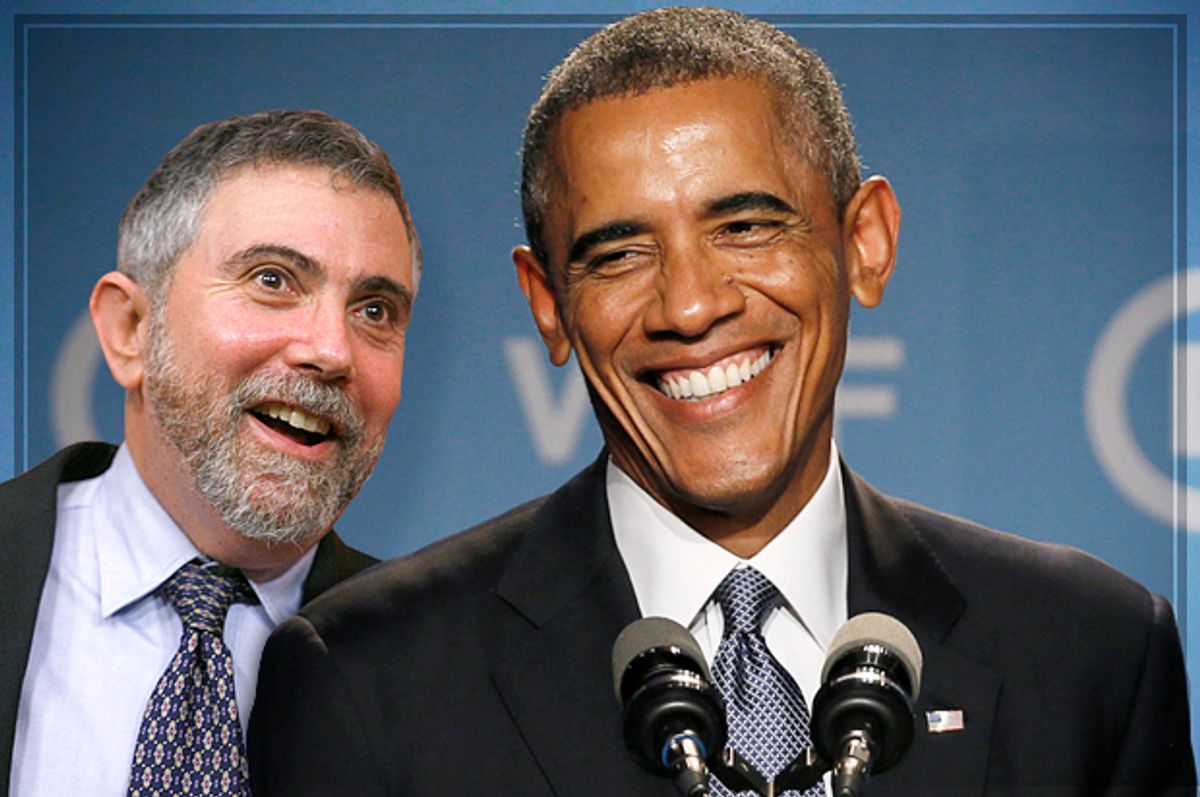 On Friday, New York Times columnist Paul Krugman celebrated the Supreme Court's decision not to gut Obamacare subsidies, saying that now that "the teething problems of the website, the objectively ludicrous but nonetheless menacing attempts at legal sabotage -- are behind us, and we can focus on the reality of health reform."

And that reality is far more sanguine than even ardent supports of the Affordable Care Act believe. Fifteen million more Americans have coverage now, Krugman said, which isn't the "partial success" that some would paint it as "many of those still uninsured are in that position because their state governments have refused to let the federal government enroll them in Medicaid."

In states that have implemented the act and expanded Medicaid, the percentage of uninsured has fallen from 16 percent to 7.5 percent, and if "we use 5 percent uninsured as a benchmark [that means] in year two we're already 80 percent of the way there."

Krugman also noted that the dire economic straits Republicans said the United States would find itself in were the Affordable Care Act to pass just haven't materialized:

One of the many, many Republican votes against Obamacare involved passing something called the Repealing the Job-Killing Health Care Law Act, and opponents have consistently warned that helping Americans afford health care would lead to economic doom. But there’s no job-killing in the data: The U.S. economy has added more than 240,000 jobs a month on average since Obamacare went into effect, its biggest gains since the 1990s.

Finally, what about claims that health reform would cause the budget deficit to explode? In reality, the deficit has continued to decline, and the Congressional Budget Office recently reaffirmed its conclusion that repealing Obamacare would increase, not reduce, the deficit.

Put all these things together, and what you have is a portrait of policy triumph — a law that, despite everything its opponents have done to undermine it, is achieving its goals, costing less than expected, and making the lives of millions of Americans better and more secure.

Now, you might wonder why a law that works so well and does so much good is the object of so much political venom — venom that is, by the way, on full display in Justice Antonin Scalia’s dissenting opinion, with its rants against “interpretive jiggery-pokery.” But what conservatives have always feared about health reform is the possibility that it might succeed, and in so doing remind voters that sometimes government action can improve ordinary Americans’ lives.