Scalia, Thomas & Alito have totally lost it: The complete and utter incoherence of the conservative Supreme Court justices

The final right-wing challenge to Obamacare was incoherent -- so why did these guys take it seriously? 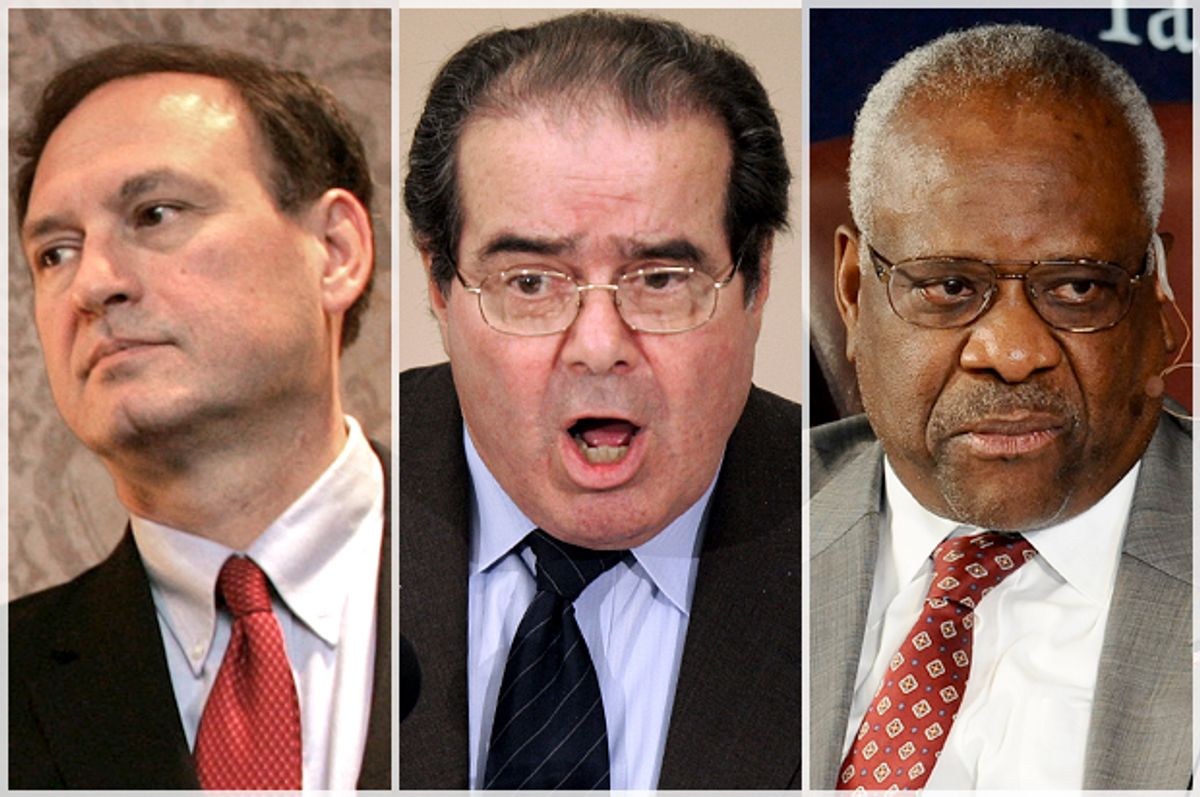 In a six-to-three decision, the Supreme Court announced on Thursday that it was upholding a key component of the Affordable Care Act, preserving federal health insurance subsidies for millions of Americans. Chief Justice Roberts and Justice Kennedy dressed to the left this time and shifted the balance in support of the law, along with justices Kagan, Sotomayor, Ginsberg and Breyer. Predictably, justices Alito, Scalia and Thomas sided with the plaintiffs.

Regarding the dissenting justices: Um, what the hell? Aren't hard-line paleo-conservatives supposed to be against frivolous lawsuits? Of course they are. And of course the King v Burwell case was absolutely a frivolous lawsuit. The entire law could have potentially collapsed over a lawsuit that disputed the existence of seven words in an otherwise massive piece of legislation. Those seven words: "through an exchange established by the state." That was the basis of the whole thing. The plaintiffs argued that based on those words, the federal government could only provide subsidies for lower income Americans who purchased insurance through a state-run exchange.

In other words, the lawsuit claimed that Obamacare insurance customers in all states that use the national Healthcare.gov marketplace shouldn't get subsidies to help cover premium costs. What's perfectly clear in the language, however, is that the governments of each state decides which exchange its citizens will have to use: either a state-run marketplace or the federal exchange. Case in point: Hawaii was the first state to form a state-based exchange: the Hawaii Health Connector. But just the other day, Democratic governor David Ige announced that the Health Connectors was financially unfeasible and opted to shut it down, transferring all customers to the Healthcare.gov. This is purely a state decision and therefore the subsidies ought to still apply.

In Roberts' majority opinion, the chief justice wrote that in the context of the law as a whole (many more than seven words in length), the claim against the word usage was "untenable." Of course. To any sentient, thinking human, untenable is right.

So, back to Scalia, Alito and Thomas. The fact that three Supreme Court justices sided with the plaintiff on Burwell proves how ideological and dumb those three justices truly are. To anyone with a basic grasp on reality, the language in the law is clear and incontrovertible. But in the far-right bubble, grasping desperately for anything that could undermine the law is de rigueur for the GOP, including nearly 60 votes so far to destroy the law in spite of the fact that President Obama would never in a million years sign such legislation. The flailing has become so pathetic that three justices in the highest court in the land sided in support of an hilariously frivolous lawsuit.

I'm old enough to remember a time when the Republican Party actively campaigned in support of tort reform, especially in the healthcare field. Indeed, tort reform is still a plank in the GOP platform. But lately, the congressional Republicans have gone all gushy for frivolous lawsuits, going so far as to sue Obama on numerous occasions. Rather than doing its job and actually, you know, legislating, Republicans from Speaker Boehner on down the line have opted instead for silly lawsuits aimed at various actions by the White House.

For example, before the Defense of Marriage Act was repealed, Boehner tried to sue Obama and his Justice Department for not enforcing the law. Elsewhere, tea party senator Ron Johnson tried to sue Obama over Congress' alleged "exemption from Obamacare."

The latter suit was egregiously and offensively frivolous since Congress isn't exempt from Obamacare at all. In fact, the law requires members of Congress and staffers who want employee-based coverage to get it through Healthcare.gov. Obama merely authorized a rule that was requested by, yes, Speaker Boehner to continue allowing the government to share the premium costs. So, Johnson was basically suing over a semantic trick -- the patently false claim that Congress was exempt from Obamacare was intended to infuriate the base and make it seem as if Congress carved out a special loophole for itself, which Obama subsequently signed. The reality is that proud Republican Ron Johnson was merely exploiting the ignorance of the GOP base, assuming it'd go around believing that Congress was truly exempt, even though it's not at all.

Obamacare expert and Yale law professor Abbe Gluck told The Washington Post on Thursday, "[The decision] sends a strong signal to people who politically oppose the law that the court understands the law and is not going to tolerate more of this frivolous litigation that tries to destroy the statute by distorting it." Here's to hoping Gluck is right and the Burwell decision is the end of all this nonsense.

Really, we've reached a point when Republicans who visit the White House will accidentally spill hot coffee in their laps just so they have an excuse to hire the nearest Jackie Chiles rent-an-attorney and stick it to Obama once and for all. (For another fantastic "Seinfeld" reference, see also Simon Maloy's takedown of the Burwell case here.)