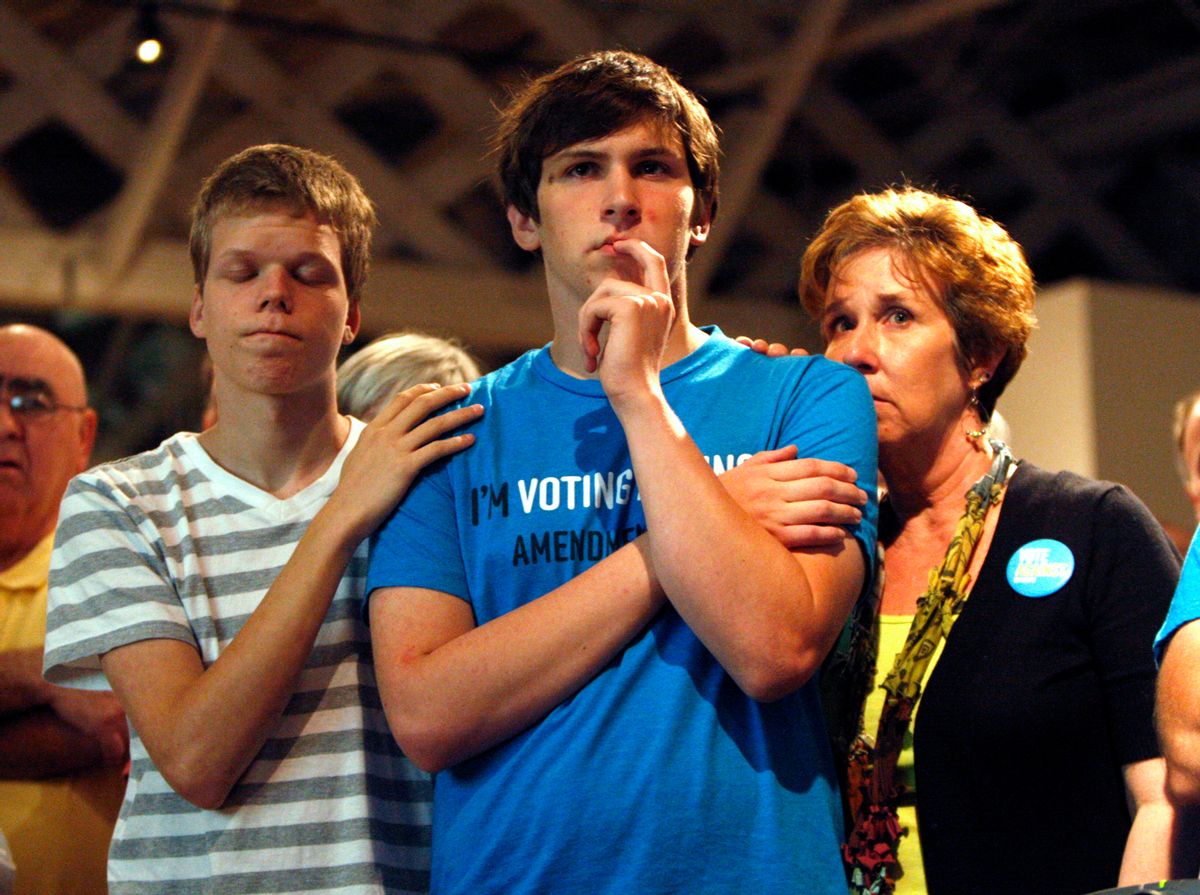 FILE - In this Tuesday, May 8, 2012 file photo, Seth Keel, center, is consoled by his boyfriend, Ian Chambers, left, and his mother Jill Hinton, during a concession speech at an Amendment One opposition party at The Stockroom at 230 in downtown Raleigh, N.C. North Carolina voters approved the constitutional amendment Tuesday defining marriage solely as a union between a man and a woman. But on Friday, June 26, 2015, the U.S. Supreme Court legalized gay marriage nationwide. (Travis Long/The News & Observer via AP) MANDATORY CREDIT: TRAVIS LONG/THE NEWS & OBSERVER (AP)
--

NEW YORK (AP) — Back in 1996, President Bill Clinton signed a law stipulating that the federal government would not recognize marriages between same-sex couples. On Friday night, the White House was illuminated with rainbow colors in celebration of the Supreme Court ruling legalizing such marriages in every state of the nation.

For gay-rights activists, the two decades between those moments were marked by a dramatic mix of setbacks and victories.

As recently as 2004 there was widespread despair among proponents as voters in 13 states approved constitutional amendments banning same-sex marriage. At that time, some activists questioned whether marriage equality was a realistic goal. Others, while wary of appearing too optimistic, suggested gay marriage might take hold by 2020.

"In that climate, it sounded ambitious and bold, but it rallied a critical mass of leaders to believe maybe it was attainable," said Evan Wolfson, president of the advocacy group Freedom to Marry that played a key role in developing the campaign's strategies.

That once audacious timetable proved to be overcautious. As more gay people came out of the closet, more of their relatives and acquaintances became supportive of gay rights. Popular television shows such as "Will and Grace" and "Modern Family" accelerated acceptance with empathetic portrayals of gay characters. Opinion polls over the past 10 years showed a huge shift in attitudes toward same-sex marriage, which is now supported by 55 to 60 percent of Americans.

And over the past two years, a series of state and federal court rulings fueled hopes that victory was imminent.

U.S. District Judge Robert Shelby alluded to the public opinion shift in his December 2013 ruling striking down Utah's ban on gay marriage as unconstitutional. "It is not the Constitution that has changed, but the knowledge of what it means to be gay or lesbian," he wrote.

The 2004 election, which dismayed gay-rights activists at the time, "was a last rearguard effort in a losing fight," according to Tobias Barrington Wolff, a professor at the University of Pennsylvania Law School.

"The progress that followed built on victories in legislatures, victories in courts, and on the growing public consensus that there is no good reason to treat LGBT people as second-class citizens," he said in an email Saturday. "That consensus was not imposed by judges; rather, it helped to educate judges and make visible the claim of equal citizenship that the Supreme Court finally vindicated."

President Barack Obama, who endorsed gay marriage in 2012, paid tribute to the persistence of its supporters in his remarks Friday hailing the Supreme Court decision.

"Sometimes two steps forward, one step back," he said. "And then sometimes there are days like this, when that slow, steady effort is rewarded with justice that arrives like a thunderbolt."

The effort predates the marriage equality movement — gay rights activism surfaced in the U.S. in the 1950s with the formation of pioneering national organizations such as the Mattachine Society and the Daughters of Bilitis. The first gay-rights protest in front of the White House took place in 1965; police harassment of patrons at the Stonewall Inn, a New York City gay bar, sparked three days of riots in June 1969.

In the 1970s, gay activism expanded to encompass marriage.

The first lawsuit in the U.S. seeking same-sex marriage rights was filed in Minnesota by Jack Baker and Michael McConnell after a county clerk denied their application for a marriage license in 1970. On appeal, the case went all the way to the U.S. Supreme Court, which dismissed it, thereby upholding Minnesota's law limiting marriage to heterosexual unions.

"Finally, the Supreme Court affirmed the question we raised 44 years ago," McConnell said in an email Saturday. "I'm a patient man, but 44 years is a long time to wait for this intuitively obvious answer."

Another couple, American Richard Adams and Australian Tony Sullivan, were able obtain a marriage license from a court clerk in Colorado in 1975. But federal authorities did not recognize the marriage, and rejected Sullivan's efforts to remain in the U.S. as the spouse of a U.S. citizen. A letter from the Immigration and Naturalization Service asserted that the couple "failed to establish that a bona fide marital relationship can exist between two faggots."

In Hawaii, three gay couples filed suit after being denied marriage licenses in 1990, and the case dragged on for five years while a backlash materialized. Hawaii lawmakers voted in 1994 to limit marriage to unions between a man and woman, and in September 1996 Congress passed the Defense of Marriage Act, which prohibited federal recognition of same-sex marriages and said no state could be forced to recognize such marriages that might become legal in another state.

In December 1996, the three Hawaii couples won the first-ever judgment ordering a state to legalize same-sex marriage. But the judge suspended his ruling the next day to allow an appeal, and in 1998 it was rendered moot when Hawaii voters overwhelmingly approved a constitutional amendment empowering state legislators to limit marriage to heterosexual unions. Over the next two decades, 30 other states passed amendments banning gay marriage.

However, same-sex marriage began in Massachusetts in 2004 under an order from the state's high court, and soon legislators and voters in other states were legalizing it without court pressure. At the time of Friday's Supreme Court ruling, same-sex marriages were allowed in 36 states.

Eliza Byard, executive director of the Gay, Lesbian and Straight Education Network, said the court victory "is that much sweeter" because it results from decades of activism and perseverance.

"When I graduated from high school in 1986, a very different Supreme Court decision (upholding state anti-sodomy laws) sent me a very different message: lesbians and gay men were outlaws, and unworthy," Byard said. "May this decision resound as powerfully for youth graduating today and for years to come — may it help to undo the stigma and undermine the violence leveled against LGBT people."

Among opponents, there was some amazement at how quickly gay marriage had become the law of the land.

"How did we reach a point where an institution older than recorded history could be redefined and altered by an idea unknown before the year 2000?" asked Andrew Walker, director of policy studies for the Southern Baptist Convention's Ethics and Religious Liberty Commission.

Many gay-rights leaders, while celebrating the high court ruling, said major challenges remain for their movement. A top priority is passage of a comprehensive federal law that would ban discrimination on the basis of sexual orientation or gender identity.

"We now have to work harder than ever before to make sure LGBT Americans cannot be fired, evicted or denied services simply on the basis of the marriage license that they fought so hard to achieve," said Chad Griffin, president of the Human Rights Campaign.

While Griffin's group will press ahead with a revised list of priorities, Evan Wolfson's Freedom to Marry plans to phase itself out of business now that its cause has prevailed.

Wolfson said he found himself crying tears of joy as he read Justice Anthony Kennedy's majority opinion and reflected on the many gay couples over the decades who had joined the battle for marriage equality.

"That underscores how long a struggle this has been before we got to the thunderbolt of justice," Wolfson said. "I can understand why people see it as happening fast — but this overnight triumph is more than four decades in the making. That's what it took."