My fancy law firm hell: I set up a Scale of Dismay to measure the degree to which my job was ruining my life

I loved being a lawyer--until I didn't. But I had no idea my years practicing would be critical to writing my novel 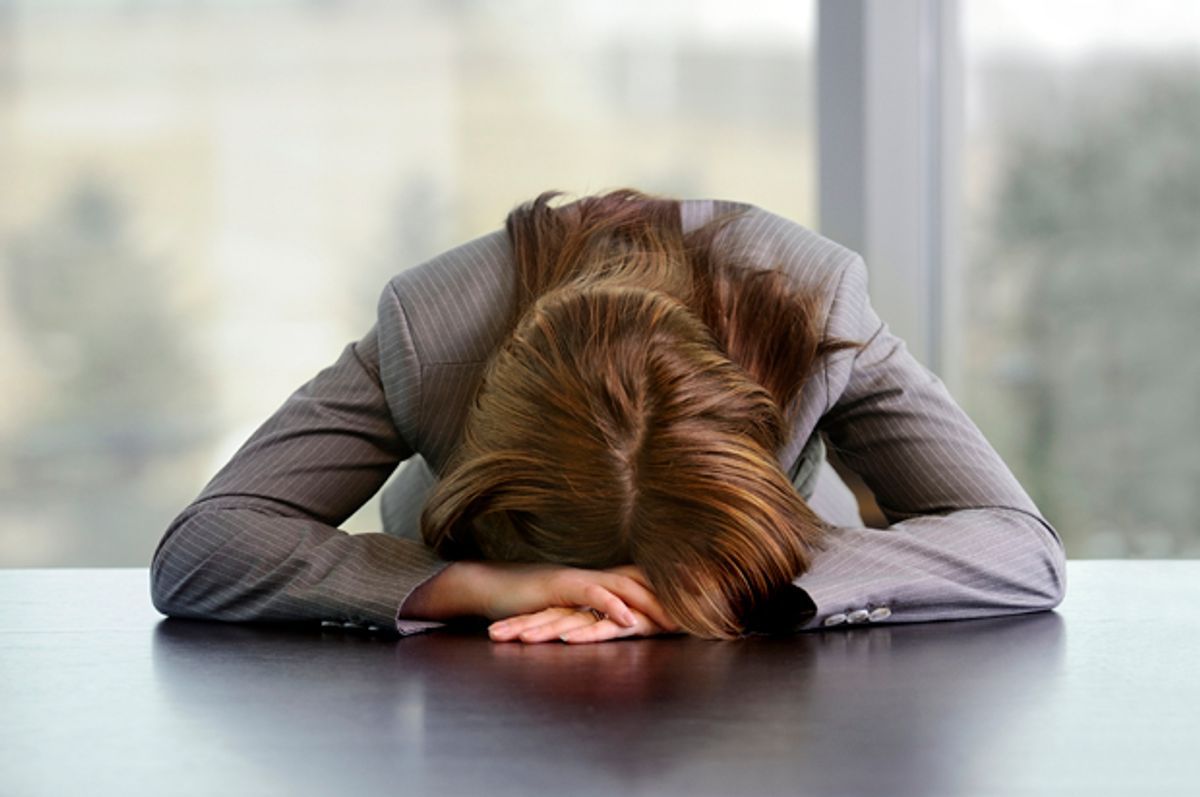 Near the end of my time as an associate at a big New York law firm, I created a chart. It was thermometer style, the kind people use to gauge progress toward sales targets or fundraising goals. I called mine The Scale of Dismay. It measured the extent to which my job was destroying my life. The lowest point—one, of course—represented a state of exhaustion, mild psychosis and feelings of low self-worth. The highest point—10—signified total annihilation of my personality.

I posted it on my bulletin board and updated it daily. My friends would come into my office and look at it. Then they’d look at me.

It hadn’t always been that way. I wasn’t one of those depressed, perennially pissed-off attorneys. I hadn’t ended up in the profession through a lack of imagination or a dearth of better options. I loved my job at first. My firm was fancy and powerful and a little bit scary, full of super-smart people who litigated fascinating cases. I did things junior associates are rarely allowed to do, like take depositions and argue in court. It was exciting and interesting—until, one day, it wasn’t. The endless hours, the shouty bosses, the anxiety about matters that, weighed in the balance, weren’t all that important. Was this what I wanted? Was this the best way to spend my life?

I doubted it. So I quit. I moved upstate, raised chickens, had a child. Bought a classic reel mower for the lawn. I went from high-powered to no powered. And it was great.

Unfortunately, it wasn’t free. The small matter of earning a living eventually poked its way into my idyllic existence. Go back to the law? Please God, no—or at least, not yet. I had a year. I wrote a novel.

I had things to say about women at work, sexual politics, monogamy and infidelity. But I didn’t want my book to be some dreary polemic—I wanted it to be fun. I’d spent my professional life doing things that were intellectually engaging and fulfilling, but rarely happy-making. If I was going to write, I wanted the act, and the result, to be as far removed from my law firm experience as possible.

So I took a familiar character—a bride having doubts about getting married—and reworked it, making her a joyful, shameless, chronic cheater. My heroine, Lily, loves her fiancé, but she also loves sleeping around. I gave her a foul mouth, a messed-up family, a passion for liquor and a confrontational streak.

I also made her a lawyer—a good one—and threw in a legal subplot. Not because I had some burning desire to be the next John Grisham. Rather, I wanted Lily to be more than the clichéd hot mess, a ditz or a stereotypical loose woman. I wanted her to be complicated and contradictory and real, to care about something and want to succeed at it. She could have been an architect, an accountant—a lawnmower designer. I decided to make her a lawyer because that’s what I knew.

When I was done, I sat back and surveyed what I’d wrought. A fast-moving, comic, booze-soaked, filthy-sexy novel—which I also hoped would challenge readers to think about their own notions of marriage, female sexuality and gender dynamics.

I’d done it! I’d escaped my dreary, workaday legal demons, purging them from my consciousness once and for all.

Turns out that my years at the firm were critical to my ability to write that novel. I had been generally aware that lawyering had sharpened my work ethic and taught me how to organize my thoughts and write clearly, all of which came in handy as I sat alone at my desk with a pen, some paper and a whole jumble of ideas. What I hadn’t expected was for my dry legal experience to inform the more creative aspects of my story—from character development, to theme, to plot. Here are just a few examples:

Lawyers are fucked up in complicated and interesting ways. Pop culture is lousy with lawyers: heroic underdogs, scheming villains, charm-deficient disasters. But when we meet a lawyer in real life, especially a corporate lawyer, most of us can’t get away fast enough. I remember the effect I used to have at parties when I came out with my calling. The widening eyes, the rearing back, the vague: “Oh, yeah?” The rapid departure for the drinks table. We’ve made our collective judgment: corporate lawyers are deadly bores or aggressive assholes. Sometimes both.

But lawyers are often so much more. They’re extremely smart, but often clueless about the world. They’re profoundly neurotic and highly articulate—in other words, crazy and unable to stop talking about it. They’re great compartmentalizers. They curse beautifully, drink excessively. Many of them write poetry, or make music—and they’re wide and voracious readers. They’re often deeply unhappy, but for interesting reasons: because they failed at what they really wanted to do, or were too afraid to try, or because they’re self-aware enough to perceive their own failings but helpless to fix them. The disconnect between appearance and reality in lawyers is profound. Scratch the staid, careful surface of the most upstanding member of the bar, and you just may find a raging, maniacal, fascinating heart.

Lawyers are fully realized, noble, vile, hilarious, depressed, maddening characters—much as you might find in a novel. I thought at first that Lily could be anything, as long as she gave a shit about it. But unconsciously, I had shaped her in the mold of the people that had surrounded me for years: inconsistent, brilliant and idiotic, careful and wild.

The legal profession is profoundly sexist. Of course it’s getting better, there are many women breaking down barriers and calling out unacceptable behavior and structural inequalities, but the fact is, huge problems remain. Did I need to join the profession to realize that? Yes, because I needed to live it. To walk into a crowded conference room and be the only woman. To be talked over, talked down to, or simply ignored. To be condescended to. To be instructed to wear a skirt to court, because a particular judge didn’t approve of women in pants. (True.) To be complimented on my appearance by opposing counsel. (Dick.) And even more, to feel acutely how law firms and courts operate in ways that make it extremely difficult for women to have both professional success and decent personal lives.

Near the end of my book, my heroine is patronized and bullied by a male lawyer. She fights back and gets her revenge, but I couldn’t have shown any of it if I hadn’t experienced similar things myself. I might have written a decent rant, but I never would have made it an engaging story.

Infidelity is everywhere. Maybe I was naive. Of course I was naive. Sheltered, too. I entered professional life understanding, as a theoretical matter, that infidelity happened. I hadn’t had any direct experience of it, though, so it was easy not to think about it. To pretend it didn’t exist. Cheating? That’s something other people have to deal with. People not like me.

At the firm, I worked with an attorney I’ll call C. I adored C. C was smart, conscientious, hard working, ethical. Kind. C had a loving spouse and family. When I found out that C was sleeping with a member of the support staff, I was aghast. This wasn’t some casual fling, either, but a passionate, full-on love affair. C? The C that I knew? This revelation upended all my preconceived notions about cheating. It was like being in a novel with a clichéd plot twist—except that this was real life, not entertainment. And if it could happen to C, it could happen to anyone.

I was fascinated. Because infidelity is fascinating. It’s about the face we present to the world, and what’s hiding behind it. It’s about our secret desires and our failures to communicate, especially with those we love best. It’s about how good people can do terrible things. None of this was earth shattering, of course—I didn’t, then and there, have some brilliant insight about the nature of the human heart—but I woke up to a truth about the way the world works, a truth that interested me. I started thinking about it, reading about it, and, eventually, writing about it. Strictly speaking I didn’t need to be in a law firm to learn about the pervasiveness of cheating, but I think it helped. Lawyers are professional secret keepers. Law is one of the few professions where you take an oath to follow the rules. If lawyers cheat, who doesn’t?

People often ask me if I miss being a lawyer. I don’t miss the day-to-day grind, but I’m not at all sorry that I went through it. I exercised my brain, increased my tolerance for sleep deprivation and learned about the messiness of bright people. I do miss the friends I made, the subsidized cafeteria, the lavish team dinners.

I also miss my Scale of Dismay. I threw it away when I left. That was a mistake. I’ve discovered that even as a full-time writer, there are days when I need to chart my crazy.

Eliza Kennedy attended the University of Iowa and Harvard Law School, where she was an editor of the Harvard Law Review. After graduation she served as a law clerk for a federal judge, then practiced litigation for several years at a prestigious Manhattan law firm. She lives in New York with her husband and son. I Take You is her first novel.

Books I Take You Lawyers Writers And Writing