Luca Dotti: "Food comes in seasons, not cans and boxes"

By Luca Dotti as told to Wesley Yiin 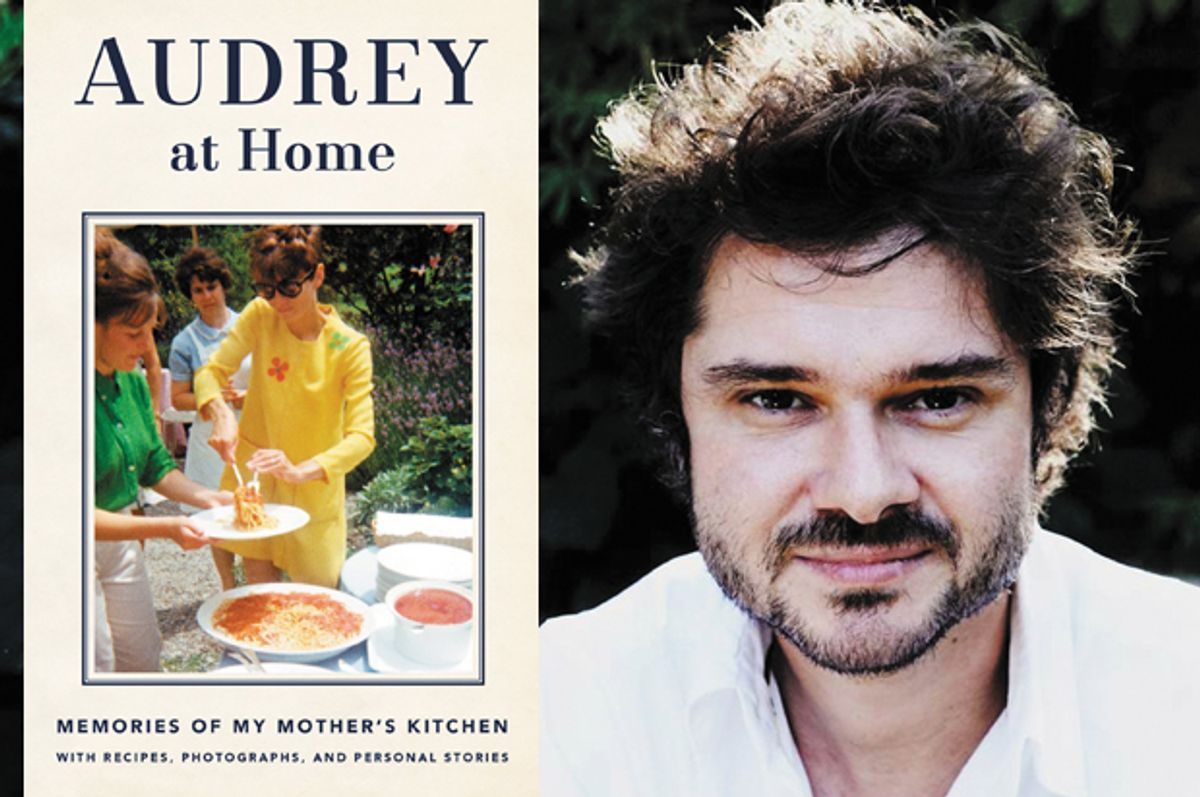 I love to cook, as my friends do, so we spend a lot of time in the kitchen talking. A friend of mine, peeking through my books and the shelves in the kitchen, saw this collection of recipes that my mother had collected as a young wife, many, many years ago. She noted, “Oh, you should do a cookbook! ‘The Audrey Hepburn Cookbook.’”

My mother started out in fashion, in smart and fashionable dresses from Valentino, but was much happier in jeans and T-shirts at home. In much the same way, those initial recipes from when she wanted to be the perfect bride made way to much simpler recipes. What I found interesting was not my mother’s cooking abilities or emphasis on being like a Le Cordon Bleu chef, but my mother’s relationship with food really started in her garden. Her goal throughout her life was to one day have a family home with enough property to have a fruit tree and a vegetable garden --not only for beauty but for sustainability.

Her relationship to food developed largely because of World War II. She directly suffered the consequences of starvation and not being able to grow foods in an emergency situation. Clearly, our garden wouldn’t have supplied everything that was necessitated in the case of World War III. This was not my mother’s intention. She was not preparing for another war. But it gave her a certain sense of tranquility.

That is an important thing because she always said she had a very close relationship with soil. In certain ways, you could say that my mother was a peasant at heart. She loved the garden to see her flowers -- but also food -- grow. The food that she wouldn’t directly grow she would mostly source from the farmer’s market close to our home.

That is an important thing that stayed with me, meaning that food starts with the produce and by consequence with the relationship you have with whoever sends your food, whether it’s the farmer’s market or the people in the shop. We often went together. My mother had a real pleasure and — maybe friendship is too much — but a really close relationship with whoever produced the food that she bought in the sense that she had a deep respect for food producing as an activity. It may be cheese or vegetables or any other thing.

I think that is an important part: knowing what you’re eating, and knowing that food comes in seasons and not cans and boxes. That was very important to my mother, but of course she came from a time when seasonal products were the only way around. There weren’t imports or greenhouses to have anything available 365 days a year.

Secondly, my mother didn’t like complications in life, in her family or her fashion. She liked to cook foods that weren’t too elaborate. If you ate something that was made of tomato sauce, it should taste like tomato sauce. Chicken should taste like chicken, you know? This was one of the reasons she loved Italian cooking so much, both because it’s very close to its original taste. It’s cheap and not elaborate, if you compare it to French cuisine. But also, as I said before, in so many ways, my mother was a peasant at heart. The Italians were not wealthy enough to spend money on more expensive ingredients. Still, they found ways to elaborate the basics like tomatoes, water, flour into something good.

My mother wasn’t directly religious in a sense — we never prayed — but she had a close and important respect for food, not only because of the common phrase, “Not everyone has enough to eat.” That certainly is important, but she had a great respect for the farmers and everybody involved in the caring of fields and animals. I especially see nowadays that so many kids have such a distant relationship with food. I’ve read so many times that some kids in cities don’t even know the shape of the fish that they’re eating because they’re eating it fried.

At a certain point, my mother wanted to raise chickens and rabbits, but she finally resisted because she couldn’t stand the idea of slaughtering them. She wasn’t a vegetarian, but she didn’t eat that much meat. She wouldn’t go as far as raising an animal, so she was happy at a butcher shop. Vegetables, in general, from carrots to potatoes to green peas to salad, were always on the table. There was never just one main dish — vegetables were always a very important part.

Following a recipe is a very good way to replicate someone else’s idea, but at the end of the day, you should start with ingredients. Ideally you should go to the market and buy things that are around or that liven up your imagination or are suggested to you by someone else. I’ve been going to the same market now for 15-plus years, and the pre-prepared meats section is getting bigger and bigger. I’ve noticed that more and more buyers are buying this stuff rather than reading a recipe or coming up with their own variations.

My mother’s childhood was cut in half by the war. Dreaming, as well as going properly to school, which are part of the basic rites of children, were shattered by war. Even in those moments, we actually have quite a few good drawings that my mother made during the war. She told us many times that in order to forget hunger, she would stay in bed and read and dream and draw. In a way, she knew very well the rescue that dreams are. Sometimes dreams are the only way to keep on having faith.

She had priorities that were interrupted by war. All through her life, she worked pretty hard, not to become a star but to reach her goals. This is an important lesson: Her goal was not to be famous, but to have a home and family, a garden, dogs; that’s the life she wanted. But so many times, I think that our working careers or scopes in life lose track. Hypothetically, if I became a star and got all this attention, maybe I’d lose my mind. There are so many stars that you see who become famous and change their girlfriends or leave their countries.

My mother always followed a sense of love and respect for her family. Her career was just work. She was thankful every day for luck and possibility, and she saw everything as great luck because she was working and making money but also having fun with great people. It was a lot of work but it was also a dream in so many ways. For a girl who just came out of the war to be propelled into this world of creating and telling stories was, for my mother, fantastic. She didn’t really dream of becoming a famous actress, but she became one. She didn’t dream of dancing with Fred Astaire, but she did.

By Luca Dotti as told to Wesley Yiin

MORE FROM Luca Dotti as told to Wesley Yiin