Gay marriage is the law of the land, and that can only be a good thing. But Kennedy's decision has some big issues 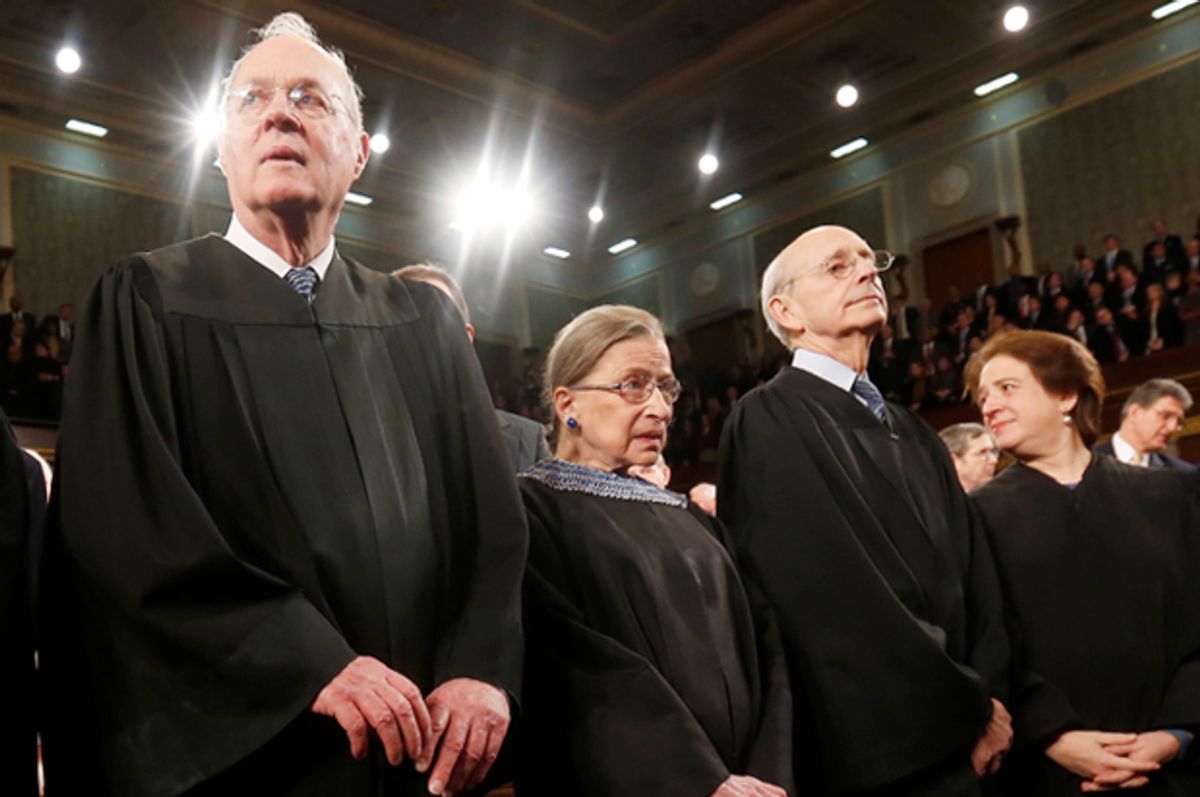 The Supreme Court’s ruling Friday that the Constitution protects same-sex marriage was great news. The party pooper was the remarkably weak reasoning by which the Court got there. Reading the four dissents poke holes in Justice Anthony Kennedy’s opinion for the Court, I kept thinking, “Yeah, that’s fair,” even though on the bottom line the Court clearly got it right. All of Kennedy’s worst traits -- the ponderous self-importance, the leaps of logic, the worship of state power -- were on display. For a decision this important, the Court should have been able to do better.

The decision relied on the doctrine of “substantive due process” -- the idea that some liberties, not enumerated in the Constitution, are so important that government can’t take them away. “The Constitution promises liberty to all within its reach,” Kennedy’s first sentence declared, “a liberty that includes certain specific rights that allow persons, within a lawful realm, to define and express their identity.” Justice Antonin Scalia complains that this sentence resembles “the mystical aphorisms of the fortune cookie.” Questions immediately arise. All laws restrict liberty. How does a court decide which “specific rights” are thereby protected? What are the boundaries of the “lawful realm”? Courts, Kennedy responds, must “exercise reasoned judgment in identifying inter­ests of the person so fundamental that the State must accord them its respect.” He goes on to explain at length why marriage is so important.

Substantive due process, however, invites courts to invent new law out of nothing -- to declare as constitutionally protected any conduct that they think is important. Opponents of the decision are already claiming that the Court was just making it up, on the basis of the judges’ personal preferences. This opinion supports that charge. Chief Justice John Roberts observed that Kennedy’s “driving themes are that marriage is desirable and [same-sex couples] desire it.” Scalia argues that the doctrine protects “those freedoms and entitlements that this Court really likes.”

Then there is the substance of what Kennedy invented. His vision of marriage is remarkably idealized. “The lifelong union of a man and a woman always has promised nobility and dignity to all persons, without regard to their station in life.” Justice Clarence Thomas sensibly objects that government is “incapable of bestowing dignity,” and observes: “People may choose to marry or not to marry. The decision to do so does not make one person more ‘noble’ than another.”

Justice Samuel Alito notes that Kennedy assumes that “the fundamental purpose of marriage is to promote the well-being of those who choose to marry.” This understanding of marriage is not universal. Many Americans have a different view, one closely tied to the capacity to procreate. The Court has no authority to simply privilege one view as the correct one. Again, that has nothing to do with law.

The fundamental problem is that Kennedy’s opinion does not explain what business the Court has addressing the marriage question in the first place. The Court can step in because the protection of “liberty” means the Court can do anything it likes. If this is all the explanation they are going to get, then conservatives are right to feel bullied by judicial oligarchs. For a decision this important, the Court had an obligation to show that its intervention was rooted in preexisting law, law that demanded this result.

There was a better way.

Ohio refused to recognize the marriage between James Obergefell and John Arthur. If Obergefell had been a woman, however, there would have been no problem. He was denied the right to marry Arthur because he was the wrong gender. The law is absolutely clear about how to deal with that. It has been clear for decades.

The Supreme Court has long held that laws that discriminate based on sex must be presumed unconstitutional and invalidated unless the government can prove that they can pass rigorous, heightened judicial scrutiny. Relying on that doctrine would answer the crucial question why the Court was deciding the same-sex marriage question at all. The sex discrimination shifts the burden of proof to the state, and the state hasn’t met that burden. The argument is clear and based on decades-old precedent. An amicus brief I coauthored developed this claim, and Chief Justice Roberts raised it when the case was argued.

This would have been the clean, lawyerlike way to dispose of the case. The state didn’t handle the sex discrimination argument well at oral argument, and it’s doubtful that the four dissenters, who had so much fun taking apart Kennedy’s mushy opinion, could have responded better. As it turned out, they didn’t have to. There wasn’t a peep about the sex discrimination argument in any of the opinions.

It’s easy to guess why. Kennedy is mercurial and unpredictable, his conservative instincts sometimes lead him in crazy directions -- he was ready to strike down the entire Obamacare statute -- and the Court’s liberals are probably terrified of offending him by writing separate opinions containing better arguments. It must rankle. Scalia clearly was poking at this wound when he wrote of Kennedy’s opening sentence (quoted above): “If, even as the price to be paid for a fifth vote, I ever joined an opin­ion for the Court that began [with that sentence], I would hide my head in a bag.” Responsible political actors sometimes have to do unpleasant things to accomplish what they must.

The decision is great news. As a matter of law, it reaches the correct result. But it’s unfortunate that the opinion that does this great thing is so painful to read. It’s like getting a brand new car with a huge stupid piece of graffiti scratched onto it. It’s ugly, and that’s a shame, but it will get you where you need to go.