"The voice of fear is Lorne Michaels' voice": 13 famous comedians choose their dream cast for Pixar's "Inside Out"

Salon asked 13 comics, including "SNL" cast members and alums, who would play the little voices inside their heads 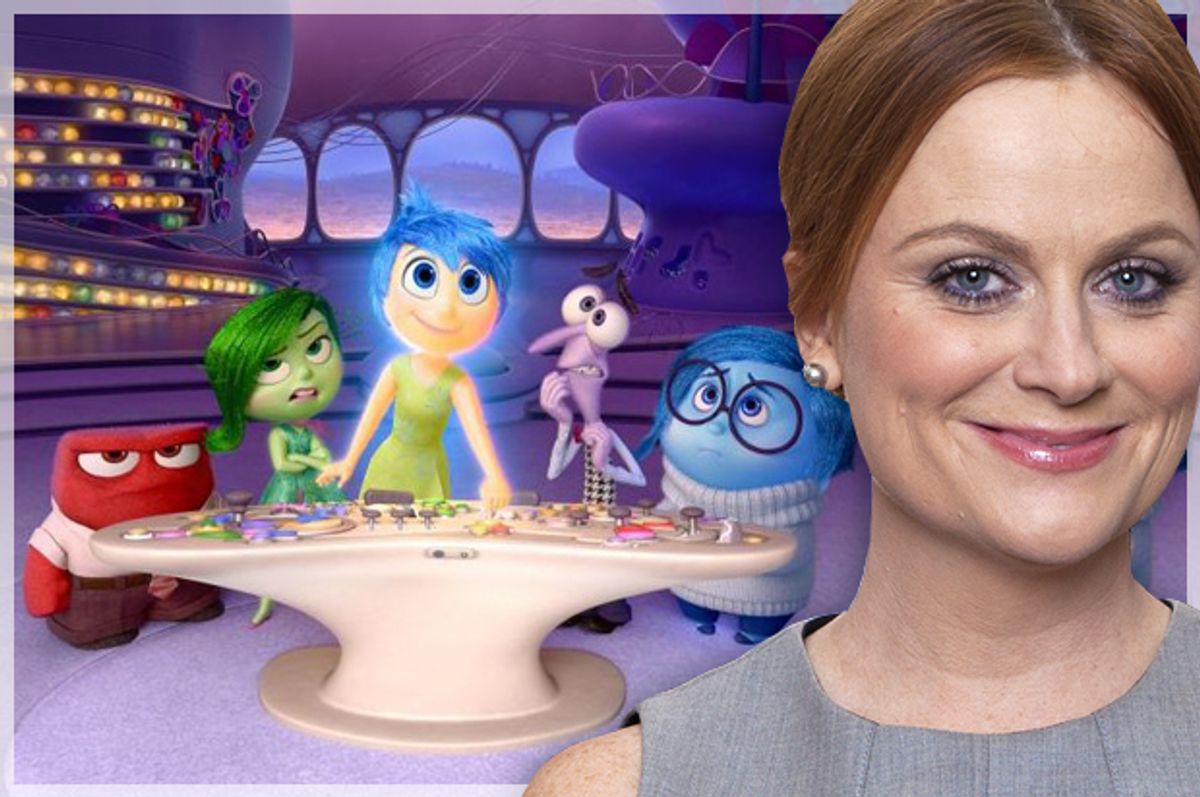 "Inside Out," which follows an 11-year-old girl named Riley and the five emotions inside her head -- Joy (Amy Poehler), Anger (Lewis Black), Fear (Bill Hader), Disgust (Mindy Kaling) and Sadness (Phyllis Smith) -- has been hailed as one of the greatest Pixar films ever made. In particular, critics have singled out Amy Poehler for her performance as the voice of Joy, the film’s narrator and Riley’s most defining emotion. As Vulture's Bilge Ebiri wrote in a tribute to the star's greatness, "it’s a wild, high-wire act of a voice performance. Give Amy Poehler the credit she’s due: She IS Inside Out."

In honor of "Inside Out," and of Amy Poehler -- because really, who doesn't love Amy Poehler!? -- we asked 13 comedians who would play the little voices inside their heads. We ran into most of our interviewees at this week's Del Close Marathon in New York, an annual improv comedy marathon thrown by The Upright Citizens Brigade Theater, which Poehler co-founded, while others caught up with us via email.

Here are their lists, in their own words:

JOY: Minnie Driver in "Good Will Hunting." "I thought she had a sexy voice. So that would be joy."
ANGER: "Someone who had that thing when someone smokes and they’ve got their throat cut out and the whistling sound it makes. The kind of impotent disturbing non-sound. That would be my anger. That’s not a celebrity."
SADNESS: "A quiet Javier Bardem."
FEAR: "Fear would probably just be my own voice."
DISGUST: Donald Rumsfeld. "He’s in a lot right now, he’s really having a moment."

"Honestly, I think the UCB 4 [the four founders of the Upright Citizens Brigade] would probably be the closest.”

JOY: Amy Poehler
ANGER: Matt Besser
FEAR: Matt Walsh
LOGIC: Ian Roberts. "I don’t think there is one for logic, but Ian would be logic."

"I can’t think of anyone but the people who did the film because they were so great. It’s Lewis [Black] and Mindy [Kaling] and Phyllis [Smith]. I mean Phyllis’ performance is so good, I think about her voice all the time, I call her just so I can hear it."

JOY: Biggie Smalls.
ANGER: Chris Farley. "Who do I like to hear scream? Oh man, probably Chris Farley, because that would make it good. He wasn’t an angry guy."
SADNESS: Zach Woods. "I love him with all my heart. He’s always sad, I’ve known him for 15 years and he’s still really shy to me. It’s insane. Every time you meet Zach Woods is the first time you meet Zach Woods, he’s the nicest, kindest gentleman in the world."
FEAR: Lorne Michaels. "The voice of fear is Lorne’s voice."
DISGUST: My sister. "She has a good 'ugh' disgusted voice."

“The voices inside my head? They all sound like me, but just saying cocksucker and stuff.”

JOY: Judy Tenuta. "Remember her? She was a stand-up in the '80s. She had a trilly voice."
ANGER: Al Swearengen from "Deadwood."
SADNESS: "Maybe, like, who’s the woman in 'Happiness'? The really sad-sack woman. The sort of willowy one."
FEAR: Bill Paxton from “Aliens."
DISGUST: Benicio Del Toro from “Fear and Loathing.”

JOY: Fred Schneider of the B-52s.
ANGER: Johnny Rotten. "That’s a perfect anger."
SADNESS: Morrissey. "You might find a theme here."
FEAR: Lee Ving of the band Fear. "That’s obscure, you’ll have to look that one up."
DISGUST: Tom Brokaw. "I broke out of my theme."

JOY: "Chris Farley's voice while staring at Veronica Vaughn's buns in 'Billy Madison.' 'That Veronica Vaughn  is one piece of ace.'"
ANGER: "George C. Scott in 'Exorcist 3' when he loses his patience with the nurse. 'It is not in the files!' I'm usually really calm, but something can just put me over the edge."
SADNESS: "Dudley Moore's voice in the original Arthur when he's says, 'Everyone who drinks is not a poet, some of us drink because we're not poets.'"
FEAR: "Sigourney Weaver when she's prancing around the ship in her underwear and realizes there's an ALIEN still on the ship. She breathes heavily and you can just feel her fear."
DISGUST: "Kevin Spacey in 'Glengarry Glen Ross' when he tells Jack Lemon's character, Shelley, he's going to rat him out to Mitch and Murray. You can just tell how much his character is disgusted by Shelly."

10. Mike Birbiglia ("Sleepwalk With Me," "Orange Is the New Black")

JOY: "That YouTube porcupine who's always eating pumpkins. I know this isn't a human voice, but I think true joy is beyond words and more in the sounds category."
ANGER: Bjork."I honestly feel she could do any of these justice in terms of pure aural freedom."
SADNESS: Maria Bamford. "She's already a wiz with voices, so to give depression that multi-dynamic element would be a real lift."
FEAR: Ira Glass. "He has a very measured tone and it would be oddly though appropriately soothing for a fear voice."
DISGUST: Flo the Progressive Lady. "She's always so upbeat so it would be nice if she could crap on some stuff for once."

"I am the voice in my head and no one would work.”