She quoted Patrick Henry and said if slaves weren't given liberty, they always had another choice: "Give me death" 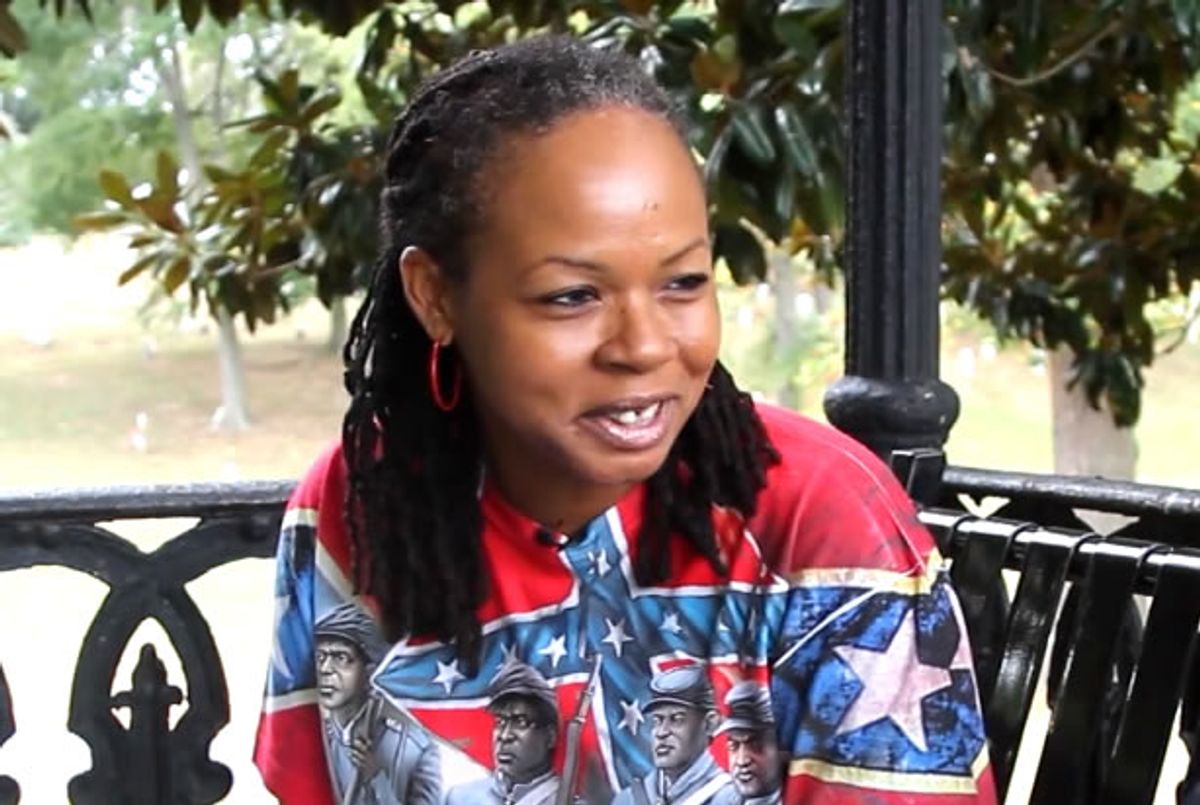 A member of the group known as "The Virginia Flaggers" -- who claim as their "weapon...the Confederate Battle Flag" and their "enemies...those who worship ignorance, historical revisionism and Political Correctness" -- declared in a recent interview that despite being black herself, she believes the Confederate battle flag "represents freedom."

In the interview -- which is part of an ongoing documentary project about the meaning of the Confederate battle flag -- Karen Cooper claimed that she was raised in the North as a member of the Nation of Islam, but "felt more welcome in the South" where, she said, "the races are more together."

She said that she was introduced to the "flagger" movement by friends of hers in the Tea Party on Facebook. "Most of the people in the Tea Party had Confederate ancestors," she added as if most people would be surprised to learn that.

"I know what people think about when they see the battle flag -- the KKK, racism, bringing slavery back -- so I knew it would be something for people to see a black woman with the battle flag."

Cooper insisted that she's not "advocating slavery," because she isn't. Moreover, slavery "wasn't just something that happened in the South, it happened worldwide."

She added that she believes "slavery was a choice, because of what Patrick Henry said, 'Give me liberty, or give me death.'" Slaves, she argued -- in a serious manner, unlike Eddie Izzard's famous "Cake or Death?" routine -- should have opted for "death."

Given that she just declared "death" the only viable response to slavery, it is somewhat odd that she then referred to herself as a "slave of the federal government," saying that "I can't smoke what I want to smoke, I can't drink what I want to drink. If I want to put something into my body, it's my body -- not theirs. That's tyranny!"

And yet, for reasons that Cooper can't seem to understand, "it's only Southerners and the battle flag that has all the weight and guilt on it," and "it's not right -- [the flag] represents freedom, it represents a people that stood up to tyranny, and by me being out there I hope you can see this is not racist."

Cooper said she wanted to convince people that the Confederate battle flag isn't about race -- and that foregrounding her status as a black flagger is the most effective way to do that.

Watch the entire interview below via Vimeo.