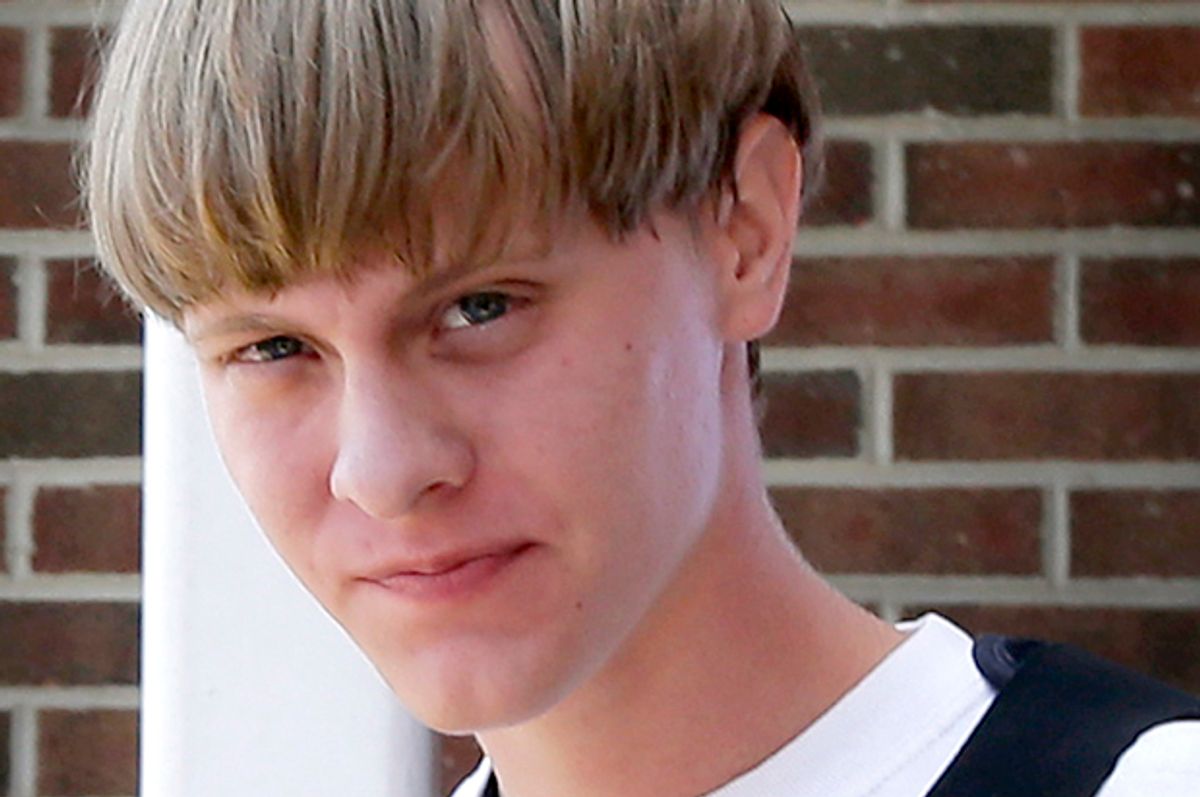 The Aryan Nations, whose messages of hate and white superiority have fueled violent crimes and domestic terrorism for decades, is applauding the murderous acts of accused racist killer Dylann Storm Roof.

“I, for one, am very glad to see young people like Dylann Roof acting like men instead of the old 60’s era hippies stoned on weed and interracial love,” Gulett posted on his web site.

“We had better see much more of this type of activism if we ever expect to see our America return to it’s [sic] rightful place in the world and our children grow up in a clean safe healthy enviroment [sic],” Gulett wrote.

Other racists individually have offered support or praise for Roof in comments posted on a forum hosted by Stormfront, the world’s largest hate site.

Gulett’s inflammatory comments came in response to a statement by Mark Pitcavage, the director of the ADL’s Center on Extremism. He was quoted in a slate.com piece as saying the idea idea of black on white crime “is one of the staples that white supremacists harp on over and over again.”

Pitcavage spoke of flags worn by Roof — the Rhodesian flag and the flag of Apartheid-era South Africa – which have become symbols for white supremacy in the United States and around the world.

“Whites actually were persecuted in Zimbabwe after the end of white rule and so white supremacists dating back all the way to the early 1970s have had a fascination with or concern over Rhodesia/Zimbabwe,” Pitcavage told Slate writer Jeremy Stahl.

Gulett responded with a headline reading: “Us Bad Ole White Supremacists and our Harps.”

“Oh really?” Gulett said of Pitcavage’s comments. “Maybe we ‘harp’ on black on white crime because it is a genuine and valid concern for our people.”

“I don’t see Mark Pitcavage saying these sort of things about Al Sharpton and the blacks in Baltimore, or Ferguson, or Trayvon Martin’s Florida or even Texas where Black Panthers are calling for a wholesale killing of Whites including our children,” Gulett said.

“We better be doing more than harping that’s for damn certain or we will end up like Rhodesia and South Africa, two places these people try to swipe under the rug in order to keep Whites from taking a genuine look at what takes place there,” Gutlett said.

Gulett has had his own brushes with the law and has done considerable prison time. His lengthy criminal record, public documents show, including aggravated assault, unauthorized use of a motor vehicle, homicide, felonious assault, possession of drugs and receiving stolen property. His most-recent arrest on a charge of conspiracy to commit bank robbery sent him to prison for five years.

Released in 2010, Gulett set up shop in Converse, La., and declared himself “senior pastor” of the Aryan Nations which he described as “most-feared and revered white supremacist organization the world has ever known.”

It the past five years, Gulett has held annual “Aryan World Congress” gatherings of white supremacists – usually attracting a small number of followers – and he has continued to have a web presence with podcasts of his hate-filled sermons. His operation now appears to be the largest publicly visible remnant of the Aryan Nations and its so-called religious arm, the Church of Jesus Christ Christian, started by the late Richard Butler. He ran the operation out of North Idaho from the late 1970s until his death in 2004.

Many of the racists who met at the Aryan Nations, including more than two dozen members of a violent domestic terrorism group called The Order, formed in the mid-1980s, went on to commit assorted violent crimes, including the assassination of a Jewish radio personality and other murders.

Later Aryan Nations attendees, such as Buford Furrow Jr., carried out similar murderous rampages. In 1999, Furrow walked into a Jewish community center in Granada Hills, Calif., and opened fire with a semiautomatic firearm, wounding five, including three children. He then fatally shot a U.S. Postal Service worker because he was a person of color.