Paul LePage is facing impeachment: Why the Tea Party hero's luck may have finally run out

For more than 4 years, Maine's governor has acted like a meaner Bill O'Reilly. Mercifully, that may be about to end 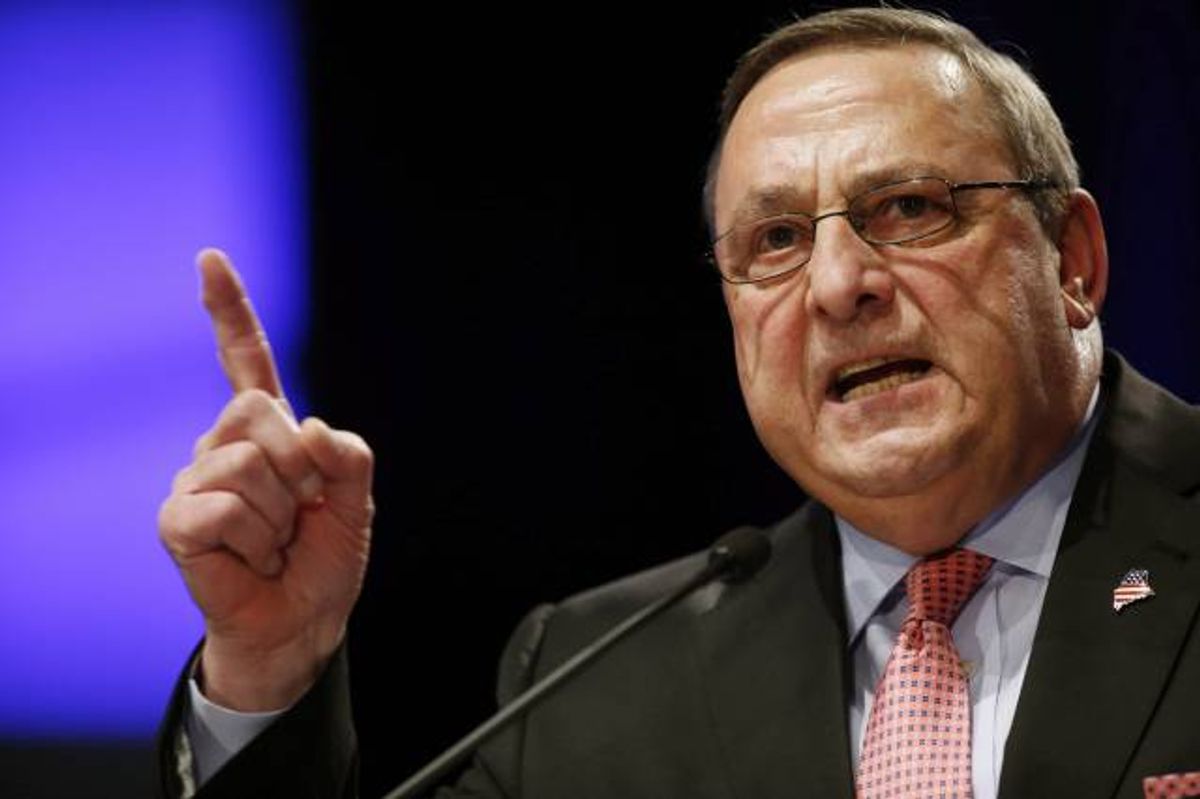 Even among the gaggle of hopping mad reactionaries swept into power by 2010’s Tea Party wave, the unbridled anger of Paul LePage, the former businessman who is currently in his second term as Maine’s governor, has always allowed him to stand out.

All of which is to explain why it’s not a complete shock to read from the New York Times that state legislators in Maine are considering the nuclear option of impeachment. He’s a twice-elected conservative in a state that leans increasingly toward centrist Democrats, but watching his administration has often felt like getting a window into an alternative universe where Bill O'Reilly runs a state government. So now that Republicans in the Legislature have effectively abandoned him, the talk of canceling the Paul LePage Show mid-season actually makes sense.

If you’re one of those vanishingly few number of people who don’t pay close attention to Maine politics, however, you probably think this sounds excessively dramatic. You probably haven’t heard of LePage; so can he really be that bad? It’s not as if he did something truly remarkable, like destroy his state’s public unions or engineer gridlock on the world’s busiest bridge. It’s true that LePage doesn’t have many legislative accomplishments of significance. But to view him solely through the bills he signs — or, increasingly, vetoes — is to look at Maine’s historically genteel politics through the wrong lens.

Not unlike New Jersey’s Chris Christie, another Republican governor in an even bluer state, most of LePage’s troubles can be summed up in one word: temperament. Simply put, the guy is a walking firestorm of pettiness, fury and resentment. Infamously, one of the first things he did upon taking office in 2011 was order the removal of a pro-worker mural from the state’s Department of Labor. He said the painting suggested the government had an anti-business bias. The story earned LePage negative attention from the national media. The whole thing was gratuitous and stupid.

Taking down a mural is, obviously, not a big deal. I bring it up, however, because I think it’s a useful case-in-point for understanding two important elements of LePage’s personality. One, the severity of his lack of judgment; and two, how the overriding, distinctive feature of his approach is one of thoroughgoing meanness. For example, here’s how LePage tends to talk about his opponents — who are, in many cases, members of the general public: They’re idiots, liars and spoiled little brats; they’re corrupt, spineless and like the Nazis. He’s attacked Democrats in the state Senate with homophobia; and he’s joked about having his critics shot.

Maine’s comparatively sober-minded GOPers, perhaps the final representatives of a long New England tradition of Republican moderation, put up with LePage for years. As has been the case all over the country, the more confrontational and ideologically rigid elements of Maine’s GOP were better-organized than the other factions. And at least LePage cut taxes. But now that the governor has responded to his 2014 reelection by trying to ram through an elimination of the state’s income tax; and now that LePage promised to veto any bill that comes his way — be its author Republican or Democrat — until Democrats allow a referendum to that end, they’re feeling differently.

What Republicans are now realizing is that LePage’s kind of anti-government conservatism is in truth profoundly authoritarian. They probably knew this already, but new allegations that LePage had threatened to deny a charter school state funds unless it fired a political rival has made it impossible to ignore. The governor has all but declared war on the Legislature itself, and he has ground much of state government into a veto-induced halt. When combined with his machine-style tactics against the charter, these assaults on the state’s balance of power have given Republicans the cover they need to go after one of their own. Thus the talk of impeachment.

Saber-rattling is easy, though; so I wouldn’t be surprised if LePage ultimately finishes his second term. Then again, very little about the political career of Paul LePage, a man who’s earned the title of “America’s craziest governor,” has gone as one would expect. It certainly would be better for Maine — and the whole country, really — if LePage’s Fox News-style politics eventually brought him to an ignominious end, but a significant chunk of Maine voters evidently like having Bill O’Reilly as their governor. The Paul LePage show goes on.