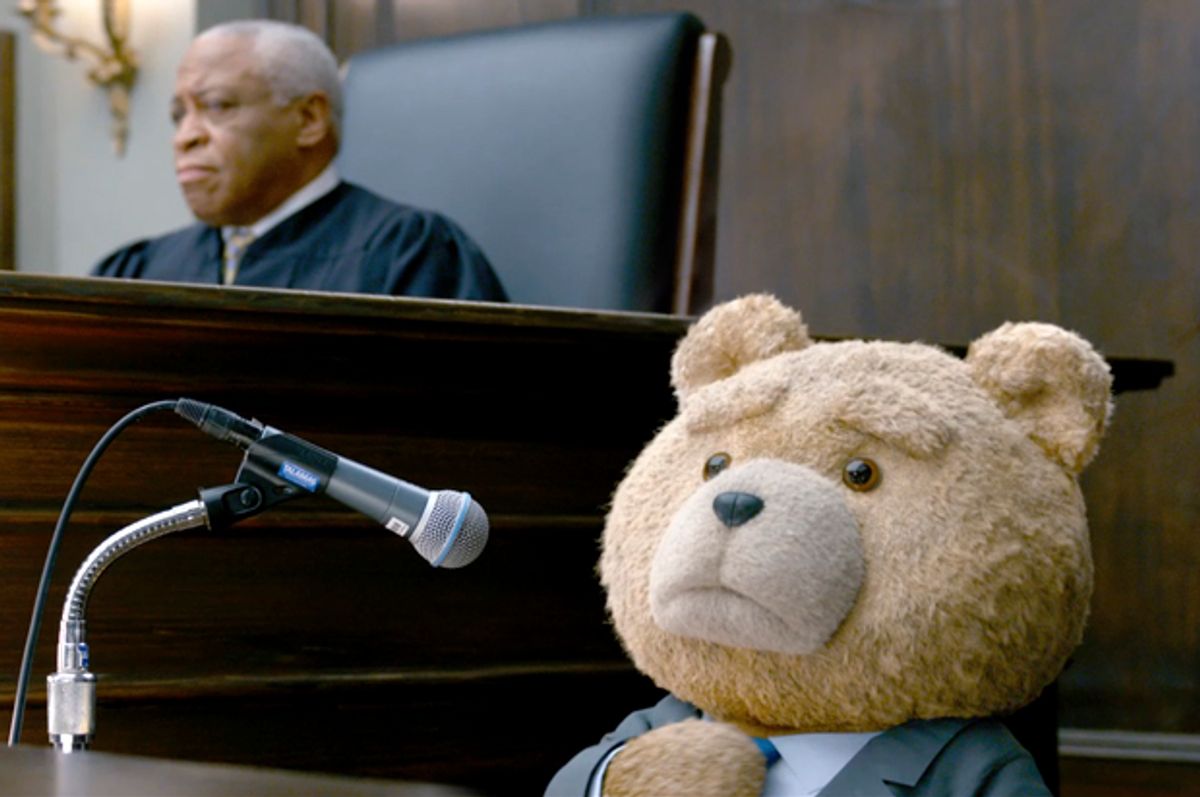 Once upon a time, there was a cuddly brown bear who could dance and talk. For decades, he was the most popular guy in town, a celebrity beloved by all, seducing the public with his charm. Then, one day, he went on trial to determine whether he was human – or just a brown bear with a very particular set of skills.

Is this the plot of “Ted 2?” Nope. It’s the true story of Monsieur Martin, a brown bear in the Ménagerie of Paris, France. In 1820, Martin was the city’s star attraction, mentioned in every guide book, who went from fame to infamy after he ate a man. Martin had a history of killing men, but this was the first time he’d actually consumed his victim. (Or so eyewitnesses claimed. Martin certainly gnawed on him, but whether he actually digested the man remains open for debate.) Parisians freaked out. But why? Brown bears are omnivores. Eating everything is what they do. Well, Brillat-Savarin’s famous phrase, “Tell me what you eat, and I’ll tell you who you are” was first published in 1825, during the period of Martin’s public trial. So, if Martin was eating men ....

The ways to personhood are many and miraculous. Martin’s solution was to use his stomach. Ted went straight for the sperm. Martin was a real bear. Ted is a CGI fiction. What these two bears share is a similar level of notoriety, for their subversive actions raised the uncomfortable question of their "humanity" (today, "personhood") to the level of public debate. The end results were hilarious and horrifying, and not in a good way.

Like Ted the First, Ted the Sequel is a “naughty nursery” sort of comedy. Using the imagery of childhood to deliver very adult content, it’s kin to the cartoon series “Drawn Together” — the humor is puerile, the language is potty, and everybody giggles the first time around because inner toddlers think farts are the epitome of comedy. Nonetheless, the most brilliant satires confront deep strife and terrible truths unspeakable in polite society -- truths regarding power, religion, sex and race, and the deformations that ensue when abuses go unacknowledged. By defaulting to simple puffery, “Ted 2” declines the deep stuff, seemingly unaware that its major plotline -- a foul-mouthed bear goes to court! -- only sounds like an original joke. In fact, it has a very long and serious history.

Neither Martin nor Ted was the first animal to take the stand to defend his case. Animals have feelings, we now say; they have hearts and minds and perforce, in the case of Ted the Bear, “soul.” And because animals can think and feel and love us, we say, perhaps they are persons and not property. In Spain, great apes have human rights. So does an orangutan in Argentina. In the United States of America, however, chimpanzees are still not legally “people,” and neither are stuffed teddy bears magically come to life. This is the cross that Ted has to bear (ahem).

But in his classic book of 1906, "The Criminal Prosecution and Capital Punishment of Animals," historian Edward Evans demonstrated just how often animals were not only accused of crimes but expected to show up in court, with these accusations implying mens rea: the capacity to know right from wrong, and thus a potentially guilty mind.

In 1522, for example, an ecclesiastical court summoned the rats to stand before it and be judged for the crime of theft. The rodents missed their court date, prompting their lawyer to explain that the rats lived in several villages, thus a single summons could not possibly have reached all of them. (Also, rats can’t read.) A second summons was read aloud in all the parishes affected by rats. Once again, the accused failed to respond, prompting their lawyer to argue that they stayed away because they were afraid of being ambushed by cats. (Also, rats don’t speak French.)

When swarms were put on trial, ecclesiastical courts typically found in favor of the critters. They had a right to eat the villagers’ crops, for animals that crept and crawled were prior to Adam and Eve, and all God’s creatures should eat well and abundantly. To accommodate their appetites, areas would be set aside where wild animals could eat as much as they liked. This was my baby sister’s solution when the groundhogs started feasting on our childhood garden: She made a second vegetable garden just for them, and ordered them to only eat from that one. Instead of following my sister’s rules, the groundhogs told their friends, and they told their friends .... Should we have been living off these vegetables, we would have starved. As for what happened to the peasants ...

When individual animals were placed on trial, however, the patterns of the rulings typically changed, for they focused on animals whose bodies and labor fed a market-based economy, which classified them as property. This group included the usual beasts of burden, but also horses, dogs and bears, all of which were working animals and thus "domesticated," because they were obedient to human commands. (When you order a trained dog to sit, he sits. When you order a trained bear to beg, he begs.) The outcomes weren’t exactly rosy. More than one sow accused of murdering small children was found guilty and hung by the neck until dead.

So when Martin the Bear went on mock-trial for real crimes, the event went down in history, because the dark satires that emerged made one thing very plain: the crux of the controversy wasn’t the brown bear’s putative “cannibalism.” It was an ongoing, bitter debate over humans being classified as animals and held captive as slaves. “Slave to men, captive despite his plea,/ Exploited, resigned in the face of adversity,” rhymed A.-E. Gastou in “The Lament of Martin the Bear." The critique wasn't exactly subtle. Parisians understood perfectly well that civilization itself, not just a charismatic bear, was being put on trial — for its hypocrisy, racism and exploitation of the politically defenseless.

Which is why it is comparatively extraordinary when one of this country's most successful contemporary working satirists mines similar fraught terrain and comes up with ... lame jokes. When Morgan Freeman, as Ted’s lawyer, intones, “What defines a person is making a contribution to society,” he is expressing the logic of corporate personhood, fictitious death panels, and dystopian movies set on shrinking lifeboats — not inalienable rights for all men and women. In a withering critique, Manohla Dargis points out that MacFarlane even “aligns Ted’s struggle with enslaved black Americans so that, while watching a scene in ‘Roots’ in which Kunta Kinte is whipped, Ted jokes that he’s just like the brutalized slave.” She concludes that “the joke is absurd, weird and unfunny,” because it misunderstands the power dynamic, along with the entire history of American racism.

On the surface, it may sound as if Martin the French bear's trial somehow substantiates that tasteless "Ted" joke — hey, isn't he really just like the slave? Err, no. The dehumanization of actual humans was the overt political subtext of Martin's trial, with the brown bear's violence in captivity standing in for slave revolts taking place on the island of Saint Domingue (today Haiti). In the 19th century, satire highlighted the intrinsic absurdity (and brutality) of having to argue that slaves were human in the first place, let alone make a beloved bear "speak" in order to attack bigotry. Today, comedies such as "Ted 2" only find humor in the stupidity itself — and then gleefully celebrate it.

"Americans don't give a crap about anything," the "Ted 2" voice-over purrs with whimsical disdain. Yes it is all a joke, ha ha, and summer is for silly. Nobody watches a film with a talking bear hoping for a big dose of downer reality or brutal historical context. In real life, however, everyday fights over personhood, civil rights and racism in America continue to wrench hearts left and right.