Why the Christian right is going to war (with itself)

The alliance between evangelical and Catholic conservatives is under more strain than ever. Here's why 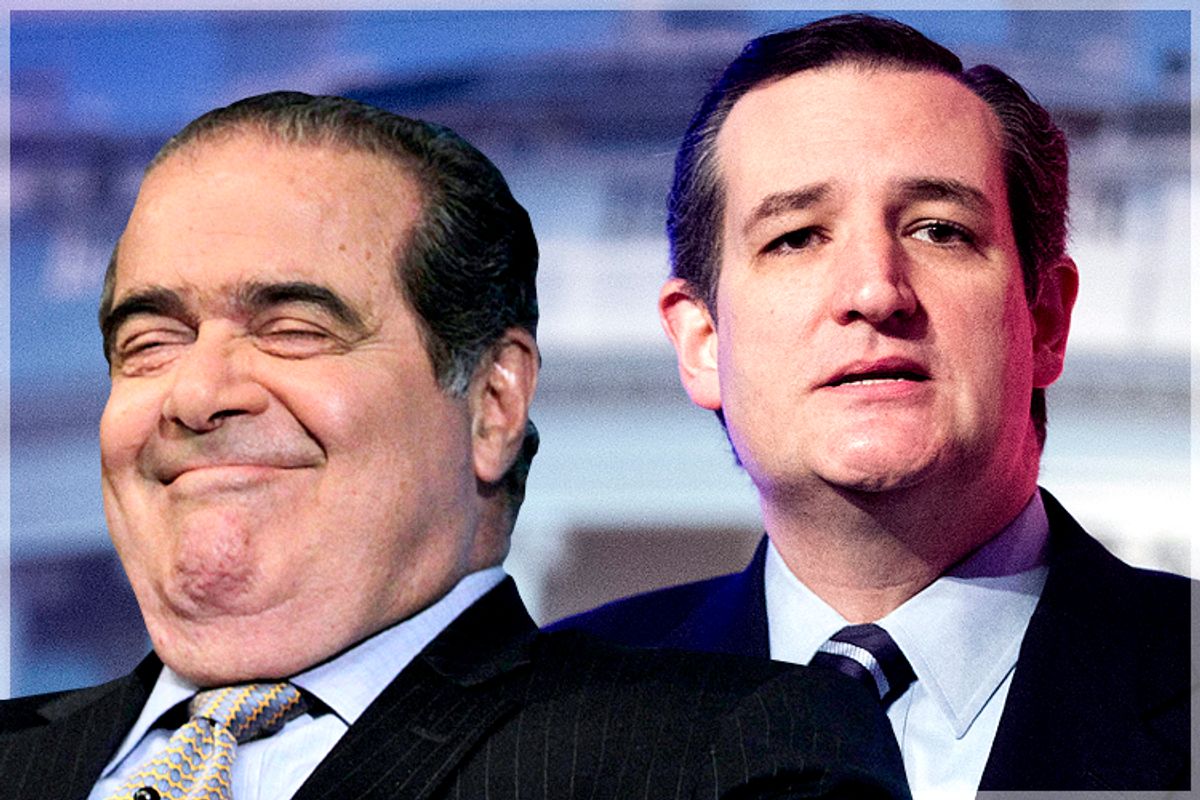 As Scott Eric Kaufman reported on this site, Ted Cruz went on the "Today" show yesterday and laid out his belief that the real victims of discrimination in this country are evangelical protestants, because the Supreme Court is unrepresentative of "flyover country" and the people who live there. The justices are a bunch of east coast Catholics and Jews, you see, and they just don't have any respect for Real Americans. Cruz thinks all that untrammeled Catholic and Jewish power needs to be stopped. “There are no protestants, no evangelicals, on the Court,” he said. “They think our views are parochial and don’t deserve to be respected. What a crazy system to have the most important issues of our day decided by unelected lawyers.”

Oddly, this comment echoes Justice Scalia's unhinged rant in his Obergefell dissent which Cruz turns back on Scalia himself. Scalia wrote:

You'll notice that when the justice said that the Court was out of touch because it was composed of a bunch of Ivy league-educated elites (like Ted Cruz, by the way) he didn't say anything about evangelicals and protestants. He is, after all, a very famous Catholic who prides himself on his social conservatism. It's unlikely that he meant to implicate his own religion in that "otherness."

If Cruz is speaking for anyone but himself, this marks an interesting shift in the religious right and one that could be consequential. The alliance between conservative Catholics and evangelical Christians has been one of the most fruitful political collaborations in our history. And it was, for all of its pursuit of noxious public policy, a rather weird demonstration of American progress.

Everyone who follows politics undoubtedly recalls that there was once a tremendous amount of anti-Catholic bigotry in the United States even as there was a political faction of Catholics who were active politically. The push and pull of that faction was an influential part of our history. The anti-Catholic vote was equally influential, and it resulted in shifting coalitions over a long period of time. Some of this was really ethnic in nature, holdovers from our European religious wars and nationalist prejudice, and some of it was based upon serious theological differences. American evangelical protestantism was as defined by its rejection of Catholic doctrine as it was by its own.

In 1928, Al Smith was the first Catholic to be nominated by a major political party and the protestants, particularly in the South, wanted none of it. They were convinced that the Pope would be taking over the American government. By 1960 the country had finally progressed enough to elect the first Catholic president, John F. Kennedy, in a squeaker. He had been forced to go through a lot of hoops to distance himself from the specter of the Pope running America, but he managed to do it.

By the 1980s, the conservative evangelical protestants were coming together to form the formidable political coalition that became known as the Religious Right. The story of Jerry Falwell and the Moral Majority is well known. But there was more to it than that. There was also the Catholic-evangelical partnership which was orchestrated by some very powerful members of the conservative movement and with a very specific strategy in mind. Franklin Foer wrote about this in The New Republic a few years back and it relates very directly to what Cruz is complaining of today:

In 1994, the eminent evangelical historian Mark Noll wrote a scorching polemic about his own religion called "The Scandal of the Evangelical Mind". The book lamented the "intellectual disaster of fundamentalism" and its toll on evangelical political and theological thought. All around him, Noll saw "a weakness for treating the verses of the Bible as pieces in a jigsaw puzzle that needed only to be sorted and then fit together to possess a finished picture of divine truth."

While many evangelicals reacted angrily to Noll's description, they tacitly acknowledged his argument with their actions. Evangelicals began aggressively reaching out to Catholics for intellectual aid. That movement reached its apotheosis with the nomina tion of Samuel Alito to the Supreme Court. With his addition to the ranks of Antonin Scalia, Anthony Kennedy, Clarence Thomas, and John Roberts, all five members of the Court's conservative majority would be Catholics. This unprecedented Catholic majority, assuming Alito's confirmation, might seem a historical accident.

When George H.W. Bush appointed Thomas, it's a good bet that his Catholicism wasn't foremost on the president's mind. But the emergence of the Court's Catholic bloc reflects the reality of social conservatism: Evangelicals supply the political energy, Catholics the intellectual heft.

And this also happened that same year, ostensibly because Catholics and protestants were worried about unpleasantness between the sects in Latin America. But as you'll see there was another agenda:

March 29, 1994 saw a development that some have touted as the most significant development in Protestant-Catholic relations since the dawn of the Reformation. A document titled “Evangelicals and Catholics Together: The Christian Mission in the Third Millennium” was published with a list of more than thirty signatories—including well-known evangelicals Pat Robertson, J. I. Packer, Os Guinness, and Bill Bright. They were joined by leading Catholics such as John Cardinal O’Connor, Bishop Carlos A. Sevilla, and Catholic scholar Peter Kreeft.

A team of fifteen participants led by Richard John Neuhaus and Charles Colson drafted the twenty-five-page document. Neuhaus is a former Lutheran minister who converted to Catholicism in 1990 and has since been ordained to the priesthood. Like Colson, he is an influential author and speaker.

Colson, of course, is also the former Nixon advisor and convicted criminal who became on of the leaders of the Christian right. He claimed they were moved by the words of the Lord to set aside their differences and perhaps that's true. But that wasn't all:

The lengthy statement of accord that resulted has been praised in both the secular and Christian press as a landmark ecumenical agreement. Especially notable is the fact that the Catholics who signed are not from the liberal wing of Catholicism. Signatories on both sides are conservatives, many of whom are active in the pro-life movement and other right-wing political causes. Historically, evangelicals and conservative Catholics have opposed ecumenical efforts.

An article in Christianity Today praised the accord for bringing conservatives into the ecumenical movement: “For too long, ecumenism has been left to Left-leaning Catholics and mainline Protestants. For that reason alone, evangelicals should applaud this effort and rejoice in the progress it represents.”

This was, therefore, a very specific political as well as an ecumenical religious communion. And it has been successful in both respects. The centuries of sectarian animosity, in America at least, were pretty much over. Whatever theological difference remained were dealt with in toleration and mutual understanding and they had a complete meeting of the minds on their socially conservative political agenda. As Foer wrote in his piece, they divvied up the responsibilities and the Catholic elites took on the intellectual battles while the evangelicals fought it out in the trenches.

But as with so many happy marriages, people change. And right now we seem to be seeing some serious fraying of that happy union. For a while now, there's been tension among the Catholic faithful between younger members, who want to see the church place a greater emphasis on traditional Catholic teachings of social justice, and the hard core conservatives, who emphasize sexual morality and traditional family values. And Pope Francis's recent statements on the former have been very upsetting to the latter. It's one thing for some younger college kids to want to join the Peace Corp, it's quite another for the Pope himself to turn into a hippie.

And now, with his controversial (and long overdue) encyclical on climate change, conservative Catholics are in full revolt. All the Republican presidential candidates have publicly distanced themselves from the Pope's pronouncements, some in a derisive style that would have very recently been seen as disrespectful had it come from a liberal critic of the Church's teachings. Rick Santorum, for example, told the Pope to stick to what he knows:

"I think we probably are better off leaving science to the scientists and focusing on what we’re good at, which is theology and morality."

Jeb agreed saying, "I hope I’m not going to get castigated for saying this by my priest back home, but I don’t get economic policy from my bishops or my cardinal or my pope.” Then he fatuously declared that "religion ought to be about making us better as people and less about things that end up getting into the political realm."

There you have the schism. First we have we have the likes of Ted Cruz saying that the Catholic intelligentsia, as represented by John Roberts, Anthony Kennedy, Clarence Thomas, Antonin Scalia and Samuel Alito are not up to the job of properly defending social conservatism on the Court. True, all but Kennedy voted against marriage equality. But the others are supposed to persuade him. The deal was that the Catholics would provide the intellectual arguments that would prevail when they got a majority -- a majority largely delivered through bloody battles fought by the evangelical right. Cruz, being one of the very few pointy headed intellectual evangelical elites, feels they have failed to deliver their side of the bargain.

And for over two decades Republicans have been telling us that there is no difference between the political and the religious realm. Many have even declared that America is a Christian nation, full stop. Now we have leading Catholic politicians, Bush and Santorum, distancing themselves from religion because the the global leader of their church is not observing that nice little agreement that held the religious right together. Their loyalties are to the party first, which isn't surprising. They are politicians. But the question is how many other Catholics will follow suit.

But don't get your hopes up for a big collapse of the Christian right. Their religious coalition may be a little bit shaky but the evangelical right is solid as a rock and more influential in the party than ever. The Catholics may find themselves on the outside of the Big Tent looking in at an old fashioned revival meeting and they may not be welcome anymore.