Cliven Bundy, Rand Paul's new BFF: So much for reaching out to African American voters!

In 24 hours, Paul communes with Cliven Bundy and suggests right-wingers have it as tough as black people 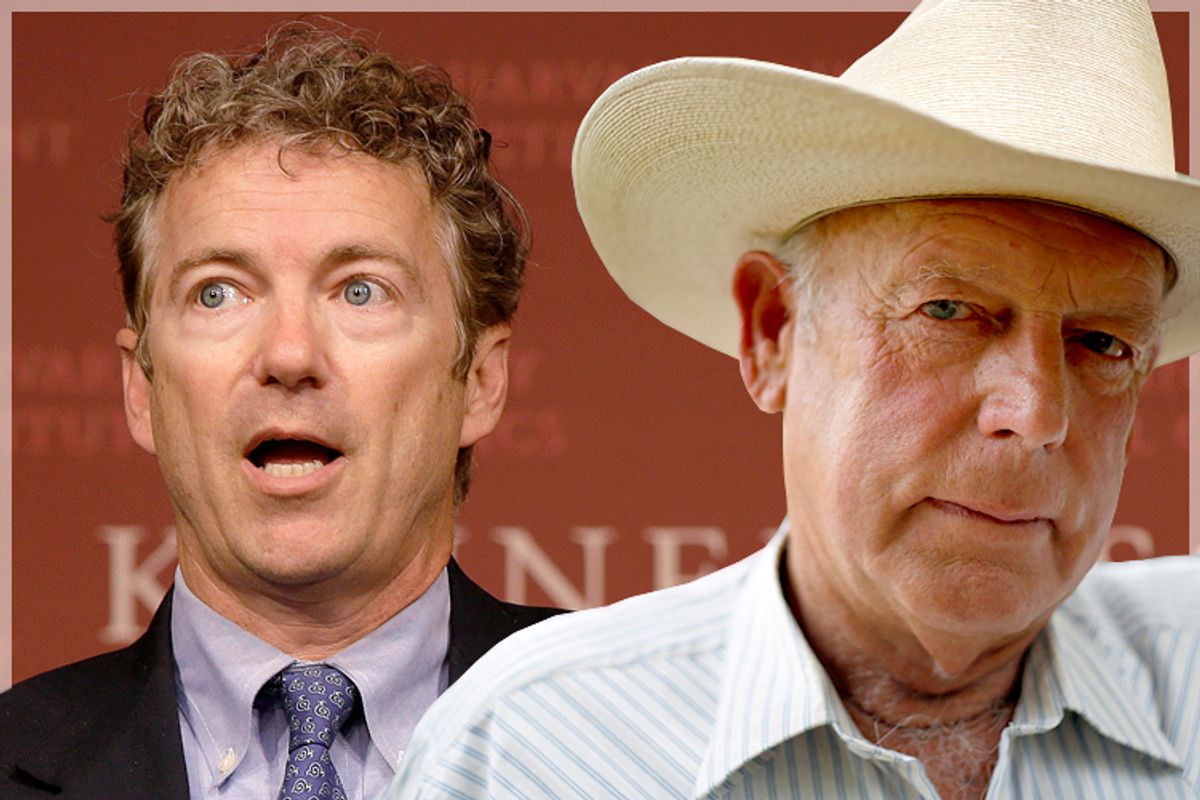 Oh Rand Paul. I sometimes want to take you seriously, if only to make clear Democrats don’t have a corner on black votes, and can’t take them for granted. But as long as you’re the chief advocate for African American outreach in the 2016 GOP presidential field, Hillary Clinton, Bernie Sanders and the rest of the Democratic field won’t have to worry at all.

On Tuesday the junior senator from Kentucky tweeted:

The day before, Paul met with Cliven Bundy, the welfare rancher who became a hero to wingnuts everywhere last year, especially on Fox News, when he refused to pay $1 million in federal grazing fees.  With the help of armed right-wing militia members like the Oath Keepers and the White Mountain Militia, Bundy got the Bureau of Land Management to back down. But the right's Bundy worship went a little underground when the rancher, enjoying the limelight, introduced a racist diatribe by saying, “Let me tell you something about the Negro.”

Maybe Paul thought that when Bundy began that way, it made him an expert on black people. But Bundy's "knowledge" consisted of explaining that the problems of black people began when slavery ended, and they were no longer taught to pick cotton.

We should give Paul credit for consistency: he used that silly line about downtrodden ideological “minorities” when speaking at a historically black college, Bowie State University, earlier this year.

Meanwhile, Paul wrapped up a visit to Nevada by meeting with Bundy. Paul aides escorted the welfare rancher into a back room, where he met with the 2016 candidate for almost an hour. “I don’t think he really understood how land rights really work in the western United States,” Bundy said. “I was happy to be able to sort of teach him.”

In their private meeting, Paul suggested one solution for welfare ranchers like Bundy was for private groups to buy back grazing lands and turn them over to the states, which would presumably provide free grazing rights to ranchers. “I disagree with that philosophy,” Bundy said he told Paul. “My stand is we are already a sovereign state. The federal government doesn’t need to turn this land back to us. It’s already state land. I don’t claim ownership. I claim rights.”

Bundy told the Associated Press, “In general, I think we’re in tune with one another.”

Paul should be embarrassed. (But so should the AP, which circulated the story about Paul meeting with Bundy without noting the Nevada wingnut’s history of racist commentary.)

Maybe the Kentucky senator’s foray into African American outreach has discouraged him, and he thinks there’s more profit in the gun-toting anti-Obama patriot movement. Or maybe he thinks outreach for the GOP means visiting black colleges, but espousing the same old policies that have driven nine out of 10 black voters to the Democratic Party.

What’s clear is that young Rand Paul seems to be assembling the coalition of his father Ron Paul, which was notably light on black support because Paul himself was kind of a racist, given to Bundy-like musings about black crime and indolence in his newsletters over the years. Communing with Cliven Bundy isn’t going to win Paul black votes, however --  no matter how much he thinks he knows about the Negro.