The fabulous, foul-mouthed Lea DeLaria on "Orange Is the New Black," Big Boo's backstory, and why Republicans can "suck my big dyke d*ck"

Salon talks to the multitalented performer about comedy, jazz, showtunes, politics and her crazy stand-up days 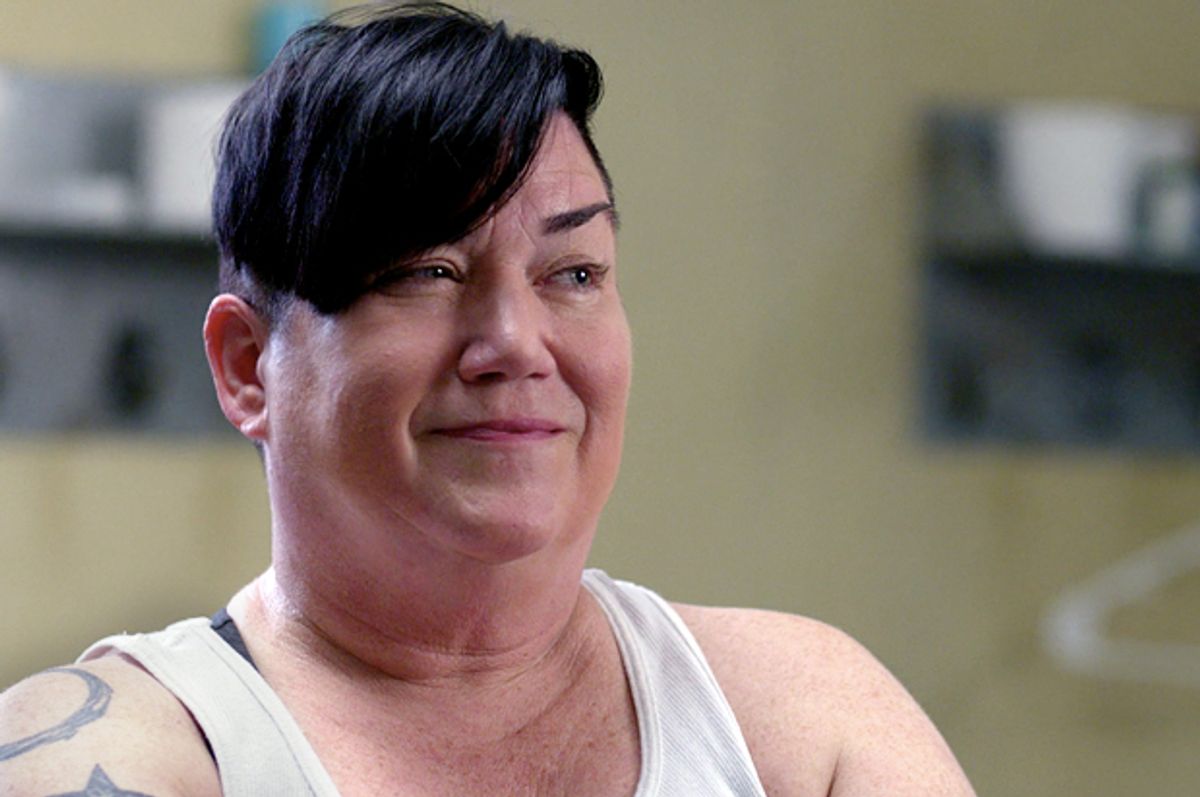 Lea DeLaria in "Orange Is the New Black" (Netflix)
--

Unapologetic humor and one-liners are often what you see from "Orange Is The New Black"'s breakout star, Lea DeLaria, but there is just so much more to this extremely diverse talent. She's been doing stand-up comedy and challenging widely accepted beliefs about gender since the early 1980s. If she's making you uncomfortable in between bursts of laughs, that simply means she's doing her job. But Lea could care less what you think of her, and that's what makes her such a juggernaut on "Orange Is The New Black." The cool thing about the hit Netflix series--besides all of its brilliant shots at our ugly Prison-Industrial-Complex (not to be confused with Brook Soso's "Agri-Complex")--is its efforts at showing you how completely divergent people manage to co-exist under very trying circumstances, even finding common ground along the way.

DeLaria is an extraordinary person with a wide range of talent — many fans of the show may not know that she's also a successful jazz singer. Maybe Big Boo doesn't give off the Billie Holiday vibe on the show, but boy can DeLaria sing. Her new album, "House of David," is a jazz reworking of David Bowie’s catalog.

Salon spoke with DeLaria recently about her history, her politics and her many creative projects.

This interview has been lightly edited and condensed.

Everyone knows you as Boo from "Orange is the New Black" (unless they don't have wifi or their neighbors finally secured their network), which you're fantastically funny in.

Thanks! Its easy to be funny because the writers are so f*cking good!

Yes. It's like one big one-liner. Now, what some people might not know about you is that you're a freaking amazing jazz singer. Maybe because Boo just doesn't give of that sultry jazz lounge singer vibe, but your voice is amazing. I particularly loved your version of Stephen Sondheim's famous "Sweeney Todd."

Thank you. There's a crazy story about how they came about. I was in the Broadway revival of "The Rocky Horror Show." Joan Jett was our Columbia, and one night she gave me this big fat joint that I smoked too much of and got ridiculously high. I went to a piano bar called The Duplex and a friend of mine was on piano. We started doing every Broadway musical the way they should never be done… like the Hip Hop version of "Annie," I made up the musical of Anne Frank called "Lets Be Frank," stuff like that. We just thought it would be hilarious to do a swing version of "Sweeney Todd," and when we stared doing it we both looked at each other and said, " This is f*cking great!" So I ran with it.

Is there anything pot can't do? As an avid jazz listener, I'm eager to find out more about your new music album, "House of David," which I'm told is a jazz reworking of David Bowie’s catalog. Combining David Bowie with jazz has got to be the sound of Jesus weeping. I mean, that's like combining sex with chocolate chip cookies. In other words, utterly phenomenal. I'm straight, but I think I'd have sex with Bowie.

I'm a big fat dyke and I would. I am so happy with this record. We do a variety of jazz on it: fusion, funk, swing soul even a gospel reworking of "Modern Love." I think you will be happy. I do a duet with Janis Segal of the Manhattan Transfer on "Suffragette City" where we blow for hours.

Very nice. When can we expect this album?

Downloads are available on June 23, and in stores July 24. The record release concert is July 18 at the Cutting Room in NYC.

June must just be your month.

June is Gay pride month, after all. We dropped "Orange" and my record is coming — I hope I get more poonanny from all of this.

If you don't, I'll write my congressman.

Or Hilary Clinton. Although if its about poonanny, maybe we should write Bill?

Yes, he will be "first lady" and hanging around other First Ladies.

YES YES YES RUN HILARY RUN!!! I f*cking love her. Did you hear that Hilary? I LOVE YOU!

It might be harder getting her on this Skype, but I will try. Now, before we get into your character's development on the new season of "Orange Is the New Black" (and there's plenty to discuss), I was wondering if you could first tell me a little bit abut your genesis into stand-up comedy, as well as your journey as a jazz singer.

Sure. My pop was a jazz pianist so I used to sing with him in the clubs when I was a kid. I was always funny. So in 1982, when I lived in SF, I decided to try stand up. My style was very loud, fast, and vulgar. Most people could only take about five minutes before screaming "Mommy, make it stop!" So I started singing jazz standards as a part of my routine and it worked. I basically would lull them into this false sense of security with "Summertime," then start screaming "Dyke," "f*ck" and "c*nt" at them again. By the way, I never sang "Summertime."

That's funny! I do impressions, but there's no way I could top incorporating jazz standards. Maybe I could do George Takei or Ricky Gervais singing "As Time Goes By."

Or "Round Midnight." Hilarious. I really want George Takei.

I live for his posts. I actually have this thing where I impersonate him and Patrick Stewart reading filthy tweets.

Maybe you can get Takei a cameo on "Orange Is the New Black?"

They would kill it!

Absolutely! Speaking of "Orange Is the New Black," let's talk a little bit about Boo's backstory.

Boo's story was so amazing.

Somehow I just knew "Finger in the Dyke" would be a Big Boo episode, but I was surprised to see the episode brought so much depth and emotion to your character. Boo went from trying to win a bean flicking contest, to being freaking Meryl Streep. Now, were you at all surprised by this offer for your character since you've mostly play more of a comedic role up to that point?

Actually, no. The writers expect us to step up to the plate and do our jobs. I was more concerned about my ability to pull it off. Everyone seems to like it, which is awesome. We had a cast viewing party. So I watched with my cast and it was very stressful. But when Laura Prepon looked over at me and squeezed my knee, I knew I had done a good job.

Wining over your peers is truly affirming. And yes, you did rock it.

Thanks. Plus, Lauren Morelli wrote some f*cking hilarious stuff in that episode, like "Lord of the Lesbians" and "you were so hot before you were a c*nt"...too many to choose.

Now you're a very informed and insightful person with liberal leanings, so maybe we can talk politics for moment. It seems the Republican party wants to lead us all the way into the 1920s, and yet many of their rank-and-file are having an especially hard time suppressing their inner self-loathing homosexual. I was wondering if you wanted to weigh in a little bit on the presidential race, since LGBT issues are very near to you and America finally seems to be jumping on board with them.

It's like this, son: As we gain our rights, those who oppose us will fight back harder. I am thrilled that the vast majority of Americans realize that what is right is right and discrimination is always wrong. The conservative creepy Christians will always be out there trying to take us down, and as long as those of us on the left stick together as one strong voice for justice, we win every time. F*ck republicans! They should all suck my dyke d*ck, which as you saw in my episode is quite big.